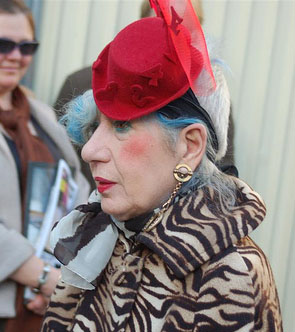 Anna Piaggi, the famed Italian fashion writer and editor, has passed away, aged 81.
Piaggi had written for Vogue Italia and created the Italian magazine Vanity, with Domenico Dolce and Stefano Gabbana, Karl Lagerfeld and Manolo Blahnik among her many fans.
Piaggi was born in Milano in 1931 and initially worked as an au pair, so she could learn new languages and travel. She met her husband, the photographer Alfa Castaldi, to whom she remained married till his death in 1995. Her first contact in publishing was at Mondadori, where she began working as a translator. She turned to fashion journalism in the 1960s, and later became fashion editor of Arianna, which saw her travel regularly to London, meeting David Bailey and Vern Lambert.
She began writing for Vogue in 1970, and subsequently worked on Vanity Fair, Panorama, and L’Espresso. Lagerfeld, whom she and Castaldi met around this time, was so inspired by her that he made over 250 sketches of her in her days in Paris in the 1970s, publishing them in Lagerfeld’s Sketchbook: Karl Lagerfeld’s Illustrated Fashion Journal of Anna Piaggi.
Piaggi was an avid collector of fashion, especially the more flamboyant designs, later exhibited in 2006 by the Victoria & Albert Museum. The exhibition, called Fashion-ology, was named after a term that Piaggi herself coined, its meaning approximating that of the Zeitgeist but specifically dealing with fashion. She adopted a cheerful stance toward fashion, able to detect its drama as well as its humour, making her particularly sought-after as a muse by many fashionistas, including milliner Stephen Jones. Piaggi popularized vintage fashion when it was hardly talked about among fashion circles. Her ‘D. P. Doppie Pagine di Anna Piaggi’—the double-pages in Vogue Italia with words, images and ideas—were famed collages that documented her fashion-ology that were irreverent and intellectual at the same time. The layouts were by Luca Stoppini, and showed Piaggi’s own enjoyment of typographic design alongside her love of fashion.
Piaggi published her first book, Fashion Algebra, in 1998, a collection of her DPs, collages and spreads in Vogue Italia. In her lifetime, Piaggi produced over 7,000 editorial pages, according to one source.
She passed away at her home in Milano.