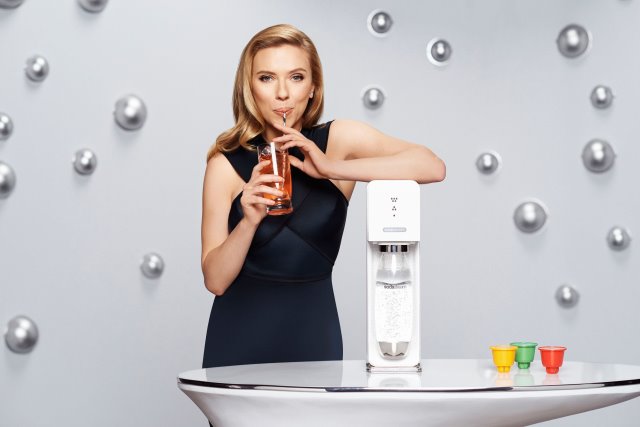 A lot of products have celebrity endorsers these days, but we never expected to see Scarlett Johansson flog Sodastream. But it is official, with the Golden Globe nominee and Tony Award winner announced Saturday as the face of Sodastream, with the first TVC featuring the actress going out during the Super Bowl in the US on February 2.
The official release says Johansson is already a long-time Sodastream user. CEO Daniel Birnbaum adds that she is ‘a role model for healthy body image and a champion for environmental responsibility, making her the perfect choice for our global ambassador. She truly embodies our brand values and we are honoured to have her join our team.’
The company is pushing a healthy, independent and environmentally friendly image with its latest marketing, stressing that its soda mixes generally contain two-thirds less sugar and calories than other carbonated beverages. By having a reusable bottle, it reduces the waste from other beverages’ plastic bottles and cans.
Sodastream says it is ‘confident that in her role as global ambassador, Johansson will help consumers embrace home soda making as the future of the beverage industry.’
The televised Super Bowl match reaches some 100 million viewers.
Johansson is no stranger to celebrity endorsements: she signed up with Dolce & Gabbana in 2009, and appeared in a Martin Scorsese-directed film for Dolce & Gabbana, alongside Matthew McConaughey last year. She has also fronted for Calvin Klein, Mango, L’Oréal, and Louis Vuitton.