I’m having a nightmare. I want to tell you guys about it—to tell you to wake me up; shake me if you have to. Scream me awake, and when I am, I want you to tell me it’s not as bad as it seems.
I’ve landed in Tarawa, Kiribati, where news from New Zealand awaited me that John has declared his faith that climate change can be addressed with technology—scientists have told him the technology isn’t far off.
At an official dinner, people look at me as though I have some glorious technology news to pass on. I don’t. I went to bed that evening feeling hollow; figures screaming through my head, the voice of that pesky Jim Salinger uttering the most terrifying words I’ve heard in many years: ‘The world has now entered abrupt climate change.’ You know Jim right, the guy with the Nobel Peace Prize? Gosh, I wish he would shut up with all that sense he talks.
In the same nightmare I wake the next day to be told that 90 per cent of drinking water wells have been contaminated with E. coli, that the crops at vital plantations are no longer growing due to saltwater poisoning the ground. That lagoons which once fed villages have become infested with E. coli, killing a large bounty of marine life. That the ocean-warming and acidification has killed a majority of the coral atoll that forms the very ground I’m stood on. It’s like a really bad apocalypse video game—I’m anxious that zombies are going to duck out from behind the door. I look around at homes whose front doors the ocean now laps, at dead fruit trees once laden with produce killed by the salt seeping into the soil. I’m failing to see what Tony Abbott found so comical about this situation.
In this nightmare I wonder what kind of technology could possibly solve this. I then remind myself of John’s track record of absolute reliability, and I feel comforted. The law can’t solve this. I mean, even if it could and there were laws to protect these people, there are no lawyers, and they’d be unaffordable for these people if there were. So, technology must be the saving grace.
I visited the hospital to witness first-hand what an infant mortality rate 10 times that of New Zealand’s looks like. Have you ever seen such a thing? It’s completely shocking; it hit me with a force a hundred times that of any image of a child lying washed up on a shore a world away. I tried to fight back the tears, and the numbing coldness that consumed my body. I tried not to vomit—but later in the privacy of my room I did find solace in a Fiji Airways sick bag. I sat there and waited for the moment I’d be shaken awake. I desperately wanted John to ride in and tell me that the threat of climate migration is many years off and not something to be worried about. I wanted Bill to sit down and tell me that none of it was real, and the sea levels were not rising.
John, could you go tell that mate of yours Obama to stop being a bloody alarmist; that according to Bill, there’s no proof Alaskan villages are vanishing into the ocean. That entire nations are not facing forced-extinction from the ocean swallowing them alive. You go tell that puffed-up American know-it-all that he’s alarming the masses, causing me nightmares and unwanted anxiety.
Bill, could you go tell all those apparently credible scientists who’ve won those fancy awards, that 2015 is not the hottest year in history and they’re just plain wrong. Round them up with Malcolm across the ditch (because they give him a hard time as well) and be done with them. Bully them into submission a bit harder. Just shut them up.

I imagined the response coming back something a little like this.

You are far too much of a pretty wee thing to be travelling to such far-flung and irrelevant places like Kiribati in your nightmares; to spend time worrying about such things. Why don’t you pay heed to the advice I gave Keisha Castle-Hughes: try visiting the salon for a bad blow-dry instead?
Don’t worry about other people. By the time New Zealand starts feeling the full effect of climate change we’ll have the technology available to deal with it.
I’ve also got Malcolm under control—he’s going to share Nauru so we’ve got somewhere to put all those helpless fellow human beings in the Pacific fleeing the rising sea-levels and food shortages. The ones who think they’re right to turn to us for help. I’m going to stop the boats.
Meanwhile, the Kardashians have a new season, vote for the fern, and use our new buzz word: technology.
In the meantime, here’s a Live Lokai bracelet. Hold on to it, because before long the Dead Sea and Everest will be things for the history books. 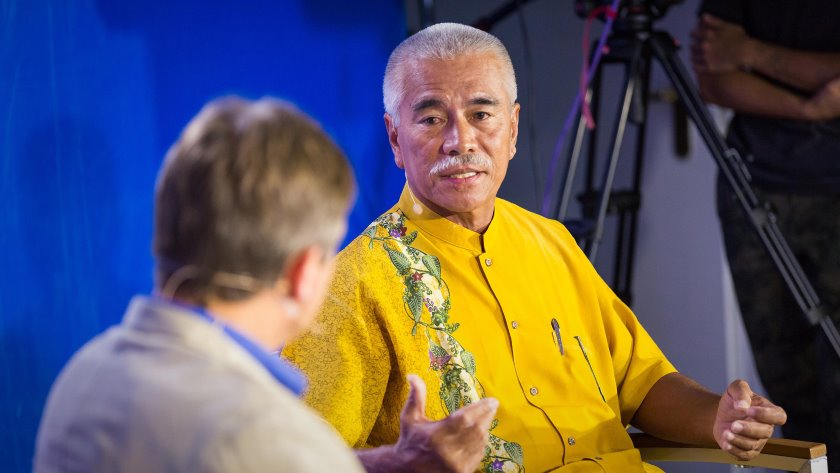 Above Kiribati President Anote Tong with his TED discussion, ‘My country will be underwater soon—unless we work together’. Click above to watch.

Guest contributor Pearl Going is a global communications’ strategist who has worked broadly across entertainment, human rights and environmental issues. Her most recent work includes the Mercy Campaign, Rohingya Slavery and SIDS. She is an avid climber and has climbed five of the seven summits.