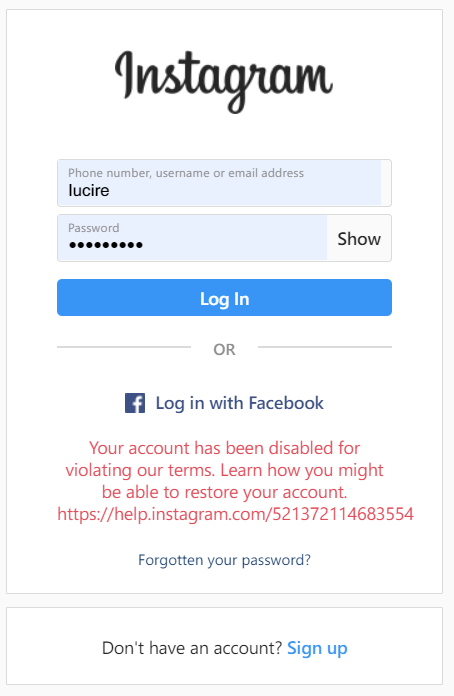 A number of Instagram accounts have been shut down with no violation of their terms and conditions, including the account for Lucire.
Activity on social media, especially Reddit, suggests that Instagram has been closing numerous accounts without warning, and barring any attempts at the link they provide to file appeals. One observer on Reddit’s Instagram subreddit suggested there were more shutdowns this time.
Investigating the mass shutdowns, Lucire publisher Jack Yan says, ‘One common denominator to some of the accounts is that their owners accessed Instagram via the desktop, suggesting that the company now frowns upon those who choose not to, or cannot, use smartphones for accessibility reasons.’
He notes that attempts to file appeals are met with an error message, claiming, ‘We limit how often you can post, comment or do other things in a given amount of time in order to help protect the community from spam,’ even though the appeals are not spam. Not even a single appeal gets through, over days of attempts.
In Lucire’s case he was fortunate to reach a Facebook Support Concierge who has referred the matter to Instagram’s internal team, but a resolution has not yet materialized.
‘If our clean, uncontroversial business account isn’t safe from Instagram’s parent company Facebook’s algorithms, then whose are?’ he asks.
Mr Yan also says that there are thousands of spam accounts that he knows of that Instagram has not touched, yet legitimate ones are being deleted.
He says as early as 2014 he had spotted an ‘epidemic’ of bot activity on Facebook that the company’s algorithms missed, while presently COVID misinformation continues to spread on the company’s platforms. ‘You’d think those were not only more detectable but were a greater priority than those of us who eschew small cellphone screens.’
He adds, ‘The big picture is that our team’s work over many years is gone, as are the accounts of many Instagrammers, even though we have not done anything wrong. Also, there are so many wonderful creatives who tag us, and their work cannot be seen through our account now, either.’
He is not a regular user himself, saying he goes on to his own account for a few minutes every one to two months, but that Instagram confronted him with a ‘We noticed unusual activity from your account’ message on his personal account as well when he began to investigate.
‘That was also after I looked at my account on the desktop,’ he says. ‘It just discourages you from using the platform altogether if you risk losing everything.’

Also in Lucire’s news section
Account restored: we’re back on Instagram
After the events of January 6, Emily Ratajkowski a...
Instagram won’t replace the fashion magazine
Facebook’s demise wouldn’t affect us m...
We removed Facebook code from our pages on March 8...
Opinions: what we need from media beyond ‘fa...
Categories
living / Lucire / media / publishing / technology / Web 2·0