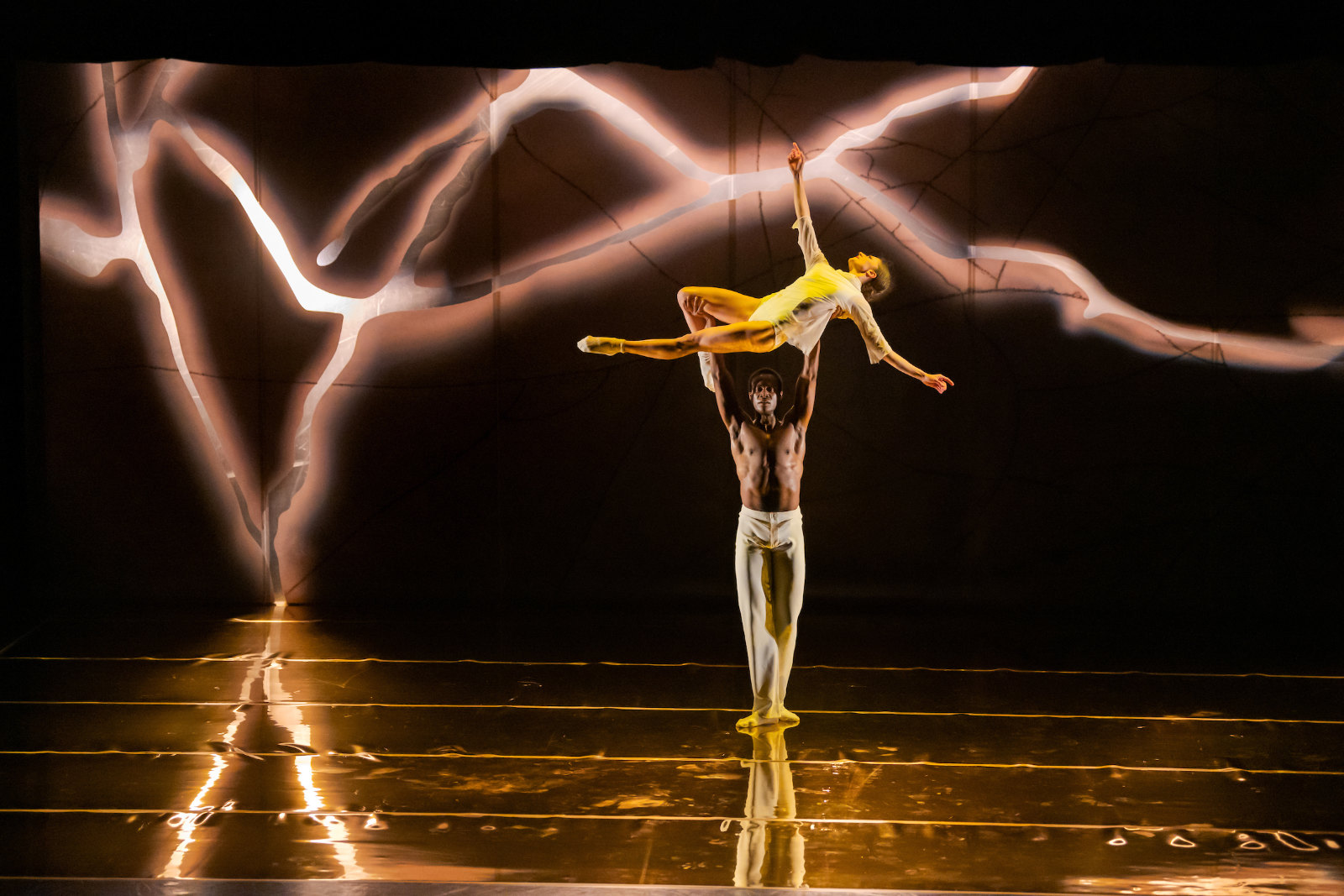 The Royal New Zealand Ballet’s latest season of Venus Rising, which premièred in Wellington tonight and will head to Christchurch and Auckland, is a compilation of three ballets from celebrated choreographers, showcasing once again the skill and ability of the company. Importantly, it gave many dancers a chance to shine, instead of the responsibility falling to a single lead or leads. 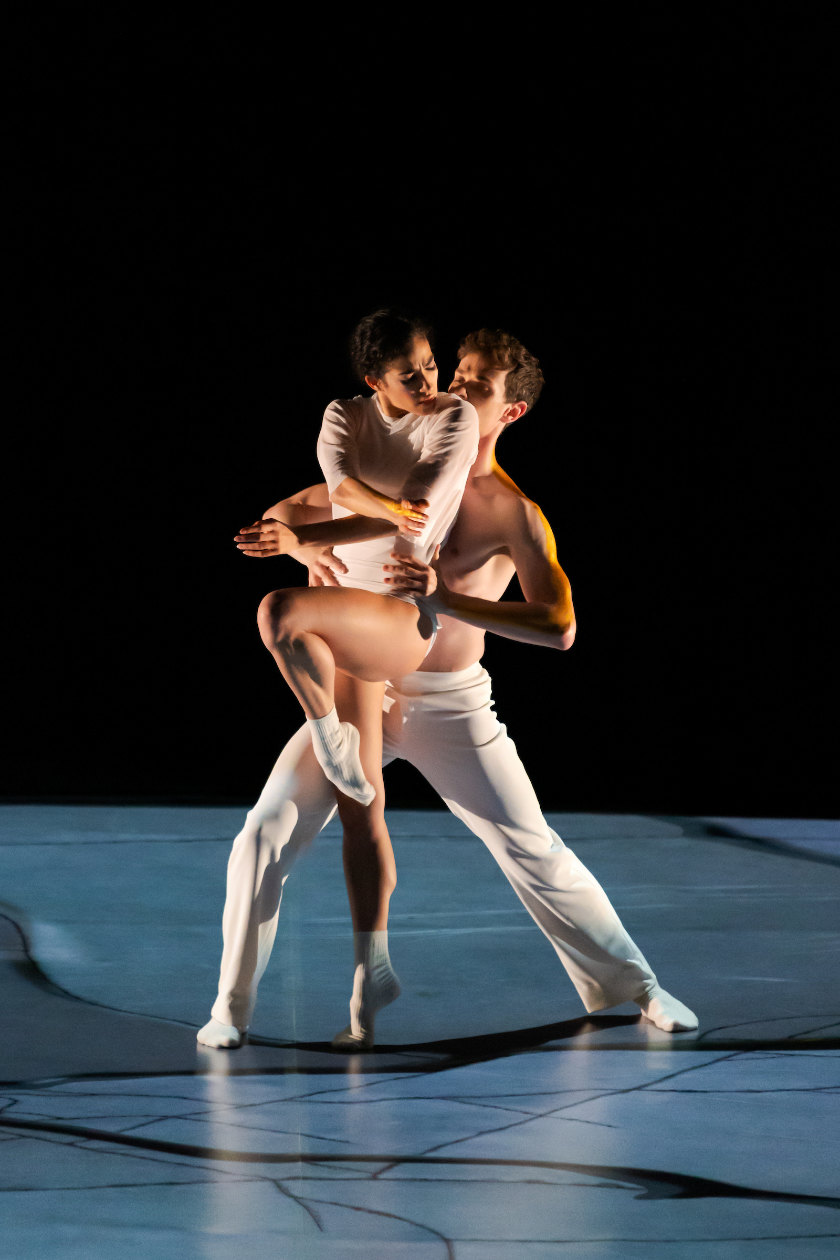 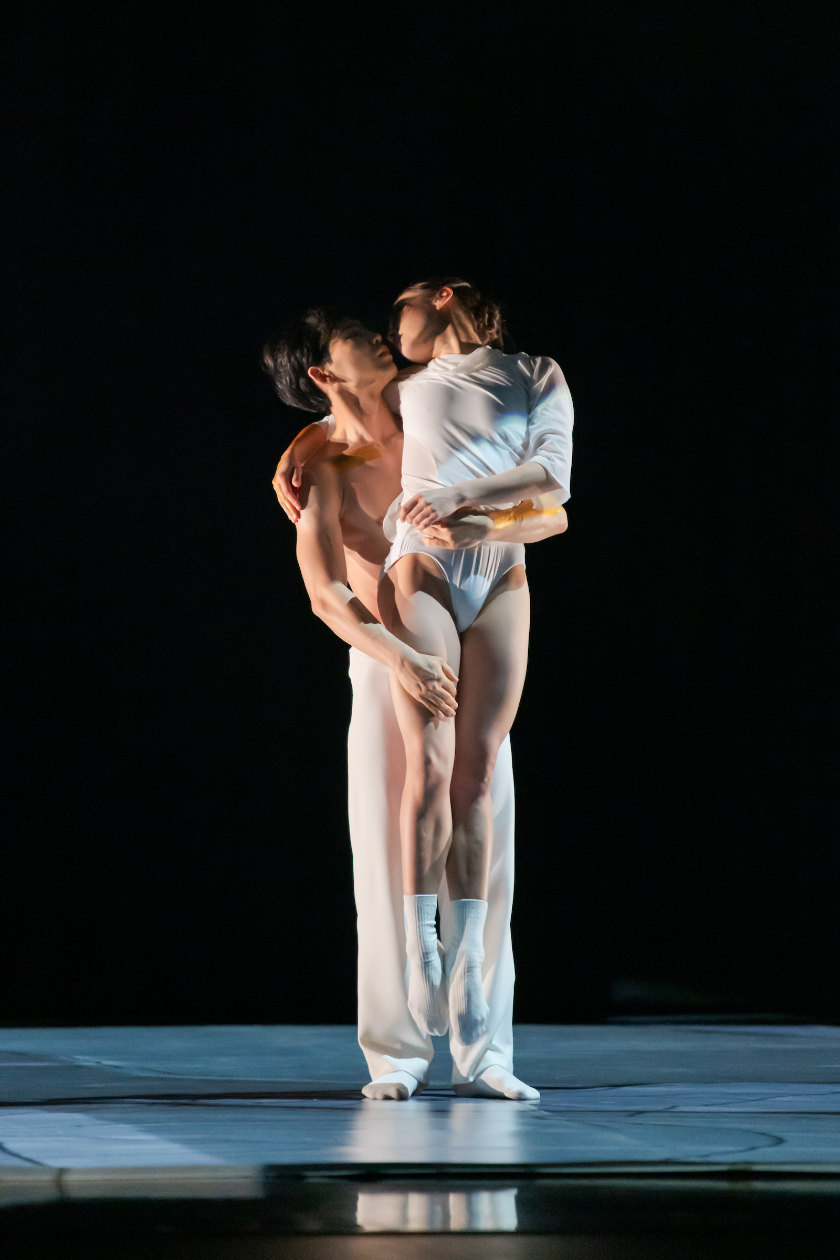 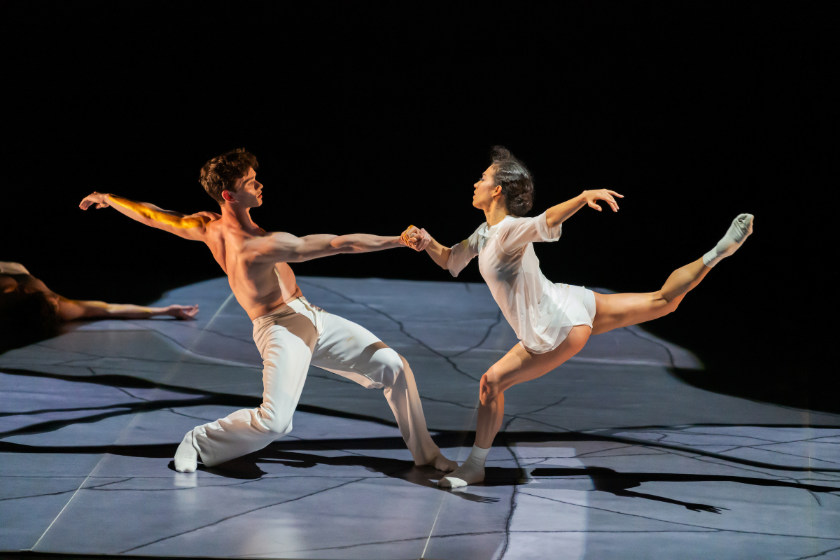 Aurum, choreographed by former RNZB dancer Alice Topp, was originally commissioned by the Australian Ballet, and premièred with that company in 2018. RNZB veteran lighting designer Jon Buswell works his magic, and it’s a treat to see the Australian Ballet’s simple, raw costumes (men in trousers, women in shirts and briefs) that highlight the strength of the dancers. Buswell plays with light and shadows effectively, fooling the audience at one point into thinking who two of the shadows belong to.

Aurum, Latin for gold, is inspired by the Japanese art of kintsugi (golden joinery), where broken ceramics are repaired with gold or lacquer. As Topp notes, ‘As a philosophy, it treats breakage and repair as part of the history of the object, something to acknowledge and honour rather than disguise …

‘Like pottery, humans are vulnerable to the cracks, knocks, pressures and fractures of life.’ The ballet celebrates human those as part of our individual authenticity, and finding beauty in our scars.

This is a beautiful ballet that features a particularly vulnerable and tender pas de deux, perhaps the most expressive example of the ballet’s core theme. The six pairs that start the ballet highlight the different experiences we each go through; and the final background frame is a reminder of the beauty in the repairs that people make in their own lives. The Ludovico Einaudi score was the best of the evening: lyrical, expressive, and beautiful. Mayu Tanigaito, Katherine Minor and Madeleine Graham, all experienced dancers, were the perfect female dancers to kick off the night’s proceedings. 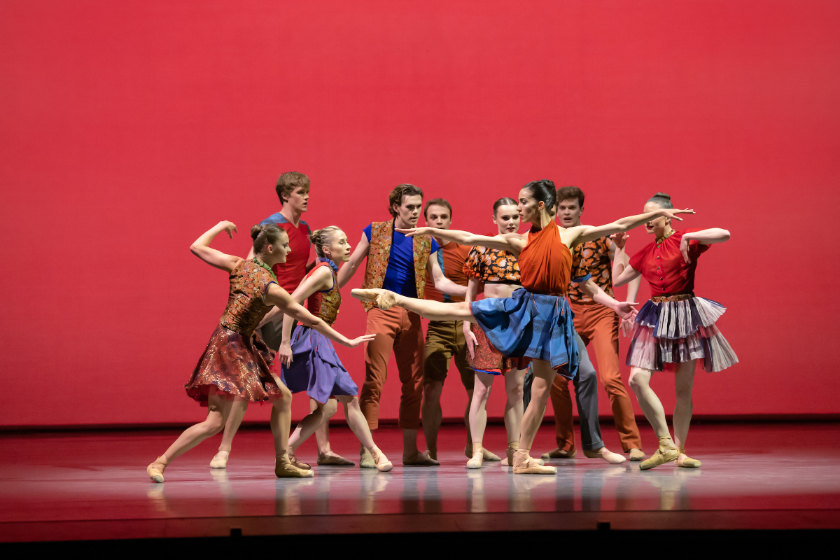 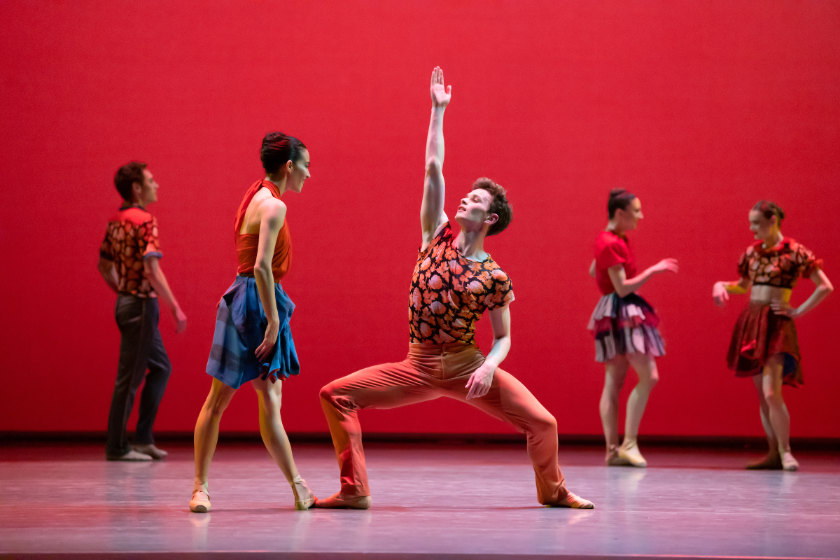 Sarah Foster-Sproull’s The Autumn Ball, commissioned by the Wānaka Festival of Colour and premièred there in 2021, is a particularly busy piece, which comprises some 400,000 dance moves in 30 minutes, according to its choreographer. Foster-Sproull set out to look at the autumn of one’s years, ‘[letting] the tensions of working life evaporate. Turning back to the potential from where we began.’

It’s characterized by an initial chaos—constant movement from a group of dancers, each intentionally doing something different—before finding a gracefulness, in particular a beautiful piece featuring two couples. Ana Gallardo Lobaina showed particular promise of all the dancers in The Autumn Ball, a joy to see each time she came on stage, paired with Joshua Guillemot-Rodgerson.

The Eden Mulholland score was a fascinating one, given its modernity and use of digital effects, and its unbroken length. The costumes by Donna Jefferis and Foster-Sproull herself were upbeat, in an Iberian fashion, with its bright magentas and reds, danced against the similarly bright colours of Daniel Wilson’s lighting that played cleverly with shadows and highlights, perfectly synchronized to the score. 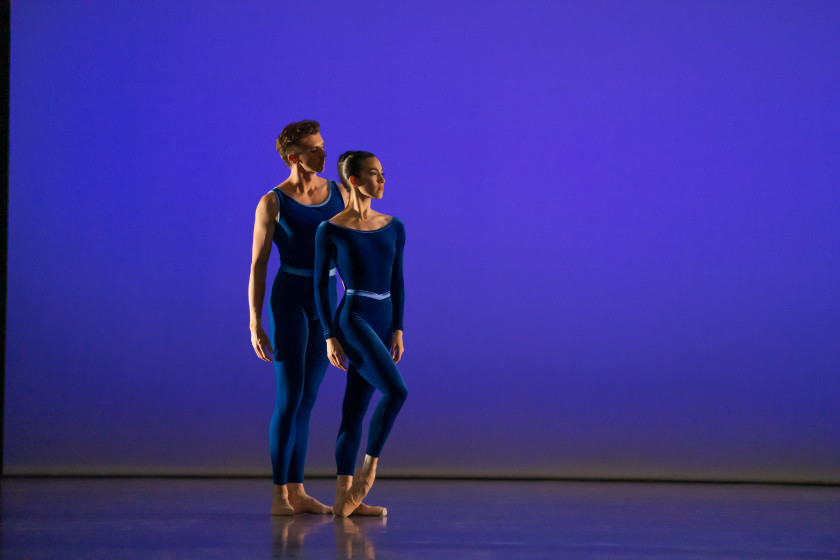 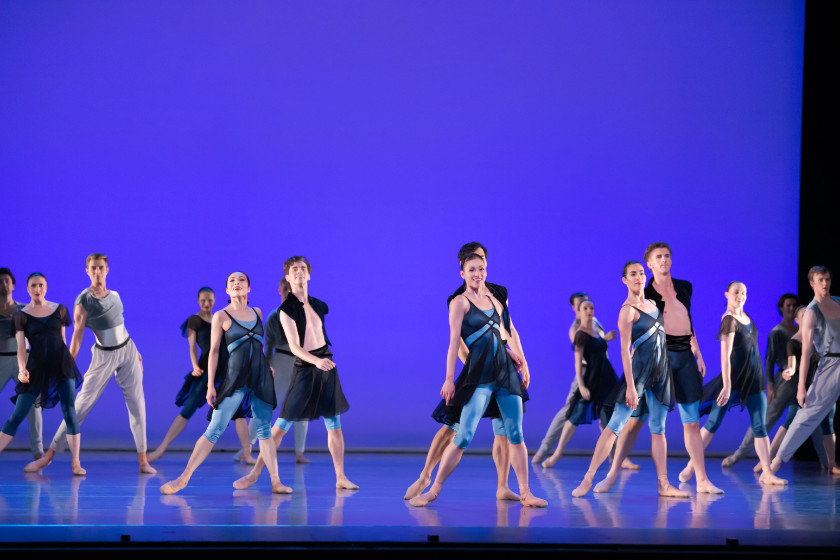 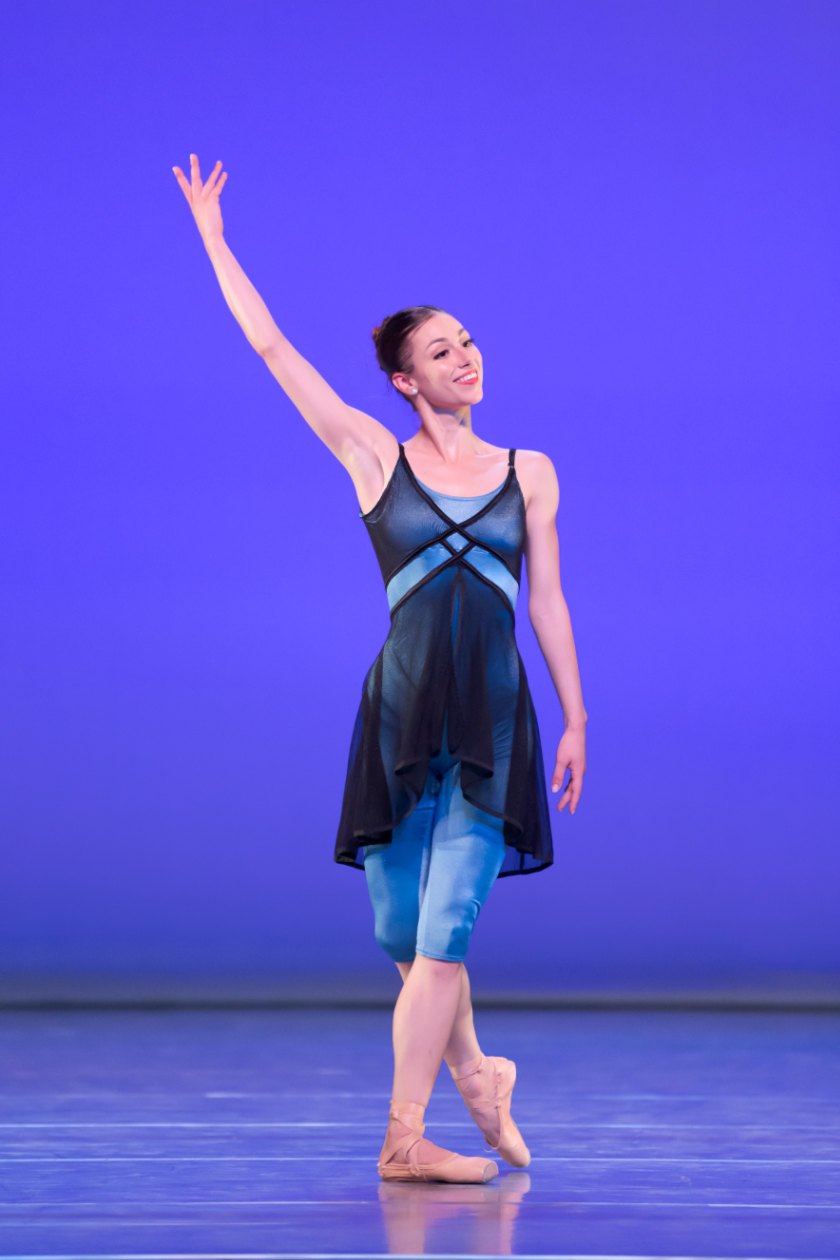 Waterbaby Bagatelles concluded the evening. This 1994 ballet by Twyla Tharp was the biggest number of the night with 27 dancers involved, and a fitting finalé. Male dancers running backwards as though it were Christopher Nolan’s Tenet; is Laurynas Vėjalis the Esther Williams of this ballet? Created originally for the Boston Ballet, the title certainly recalls the grand swimming numbers of Williams is known for, with female dancers in bathing caps and Vėjalis amongst them, bare-chested and showing his expertise; while the rows of lighting tubes that ascend from the stage in the opening moments are meant to recall aquarium lighting. With seven composers’ works incorporated into the ballet, there’s plenty of variety tying back to the water theme. For us it was Kate Kadow and Kihiro Kusukami whom we spotted giving their all, though with this ensemble cast every dancer had a noteworthy role to play. The costumes by the Pacific Northwest Ballet deserve a mention, in particular the navy and blue ensembles worn by several of the dancers.

Venus Rising runs till Saturday, November 26 in Wellington, before heading to Christchurch for its first performance there on December 1, departing after the Saturday matinee on December 3; Aucklanders will get to enjoy it from December 8 to 10. Find out more at rnzb.org.nz.