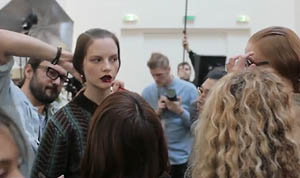 On day two of Paris Fashion Week, we feature videos from Carven, Balmain and Nina Ricci, plus our ﬁrst highlight reel from la semaine de la mode.
Guillaume Henry at Carven continued to make the house more chic by the season. Once nearly dormant, in six seasons, Henry has made Carven the darling of young fashionistas—and autumn–winter 2012–13 was no exception, with skirt suits, and dresses and shirts with prints from Hieronymous Bosch’s ﬁfteenth-century paintings. There was a recurring church motif, with stained-glass windows among Henry’s inspirations.
At Balmain, meanwhile, Olivier Rousteing was inspired by Fabergé eggs, evident from the ﬁrst look on the catwalk, with the appearance of gold embroidered panels. His coats and jackets were boxy, while we saw colours inspired by the eggs: green, gold, pearl and silver. This was a collection that conveyed luxury but never went over the top—and seems particularly well suited to the times without plunging us into the dark moods that so many of the Italians did.
Peter Copping at Nina Ricci dived into a young girl’s 1950s’ dress-up box, though the result was more sophisticated than the inspiration. Using a palette of pink, magenta, plum, mauve and black, Copping used tweed, fur and organza, as well as embellishments of ribbons and ﬂowers. This might be a young girl dressing up, but the layers of clothing complemented each other, from sheer tops to bouclé wool coats. The sleeves may be dangling low and there were buttons sewn randomly on, but the result still conveyed a stylish, substantial and comfortable feel.