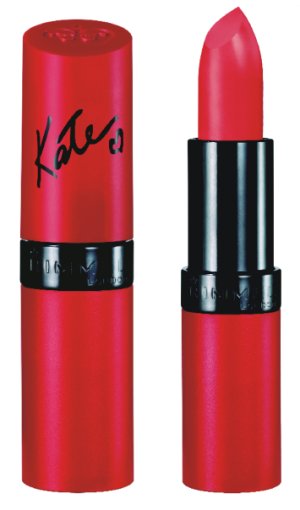 One year ago, Kate Moss launched her first lipstick with events at Claridge’s and the Battersea Power Station, tying in with London Fashion Week. The collaboration has continued with Rimmel, with winter 2012–13 shades, which went on sale on October 3.
The new matte-finish lipsticks, which come in five shades, ranging from fuchsia and pink to coral, are priced at £5·49 each.
Rimmel says that Moss also contributed the packaging design. It features a matte red pack with her signature in black.
The continuation of the collaboration with Rimmel shows just how enduring Moss’s image is. The 38-year-old supermodel continues to be appealing to beauty companies, and remains one of the modelling industry’s top earners.
Last Friday, Rimmel launched a competition with the UK edition of Condé Nast’s Glamour magazine. The winner will receive a £150 hamper, while each of the 100 runners-up will receive one of the new matte lipsticks. Readers can check out the competition via GlamourMagazine.co.uk.
Moss has worked with Rimmel for ten years. Last year’s celebrations included an advertising campaign that featured her departing a Croydon parking building via helicopter, which subsequently flies over the O2 and Tower Bridge. The same helicopter actually dropped Moss home after the shoot.
The Battersea after-party launching the campaign saw Moss arrive by helicopter as well. Donna Air, Sadie Frost, Steve Mormoris, Cara Delevingne, the Noisettes, Solange Knowles and Georgia May Jagger were among the guests.
Moss has also said that the first lipstick she ever wore was from Rimmel, called Heather Shimmer, an iridescent lilac.