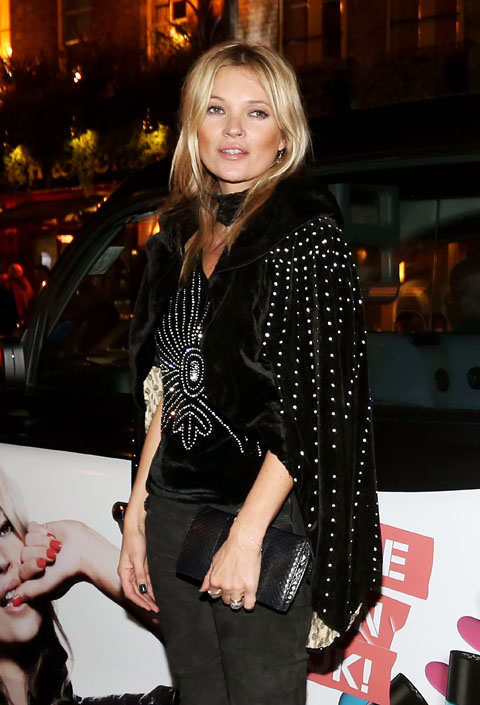 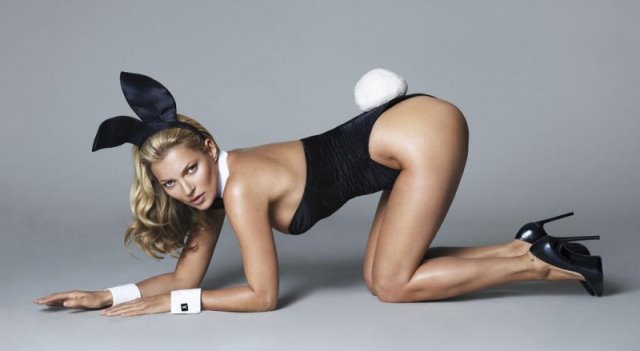 Suzy Menkes isn’t the only woman getting a special award from the British Fashion Council, supermodel Kate Moss will receive one, too.
Her Special Recognition Award at the British Fashion Awards is presented to mark her 25 years in the business and her continued influence on the industry, said the Council.
Croydon-born Moss was discovered in 1988 while on holiday by Sarah Doukas, founder of Storm Model Management. Then 14, she and her family were returning from a holiday in the Bahamas and were awaiting their homeward flight at JFK.
While considered a supermodel in the original sense of the word—her contemporaries were Cindy Crawford, Linda Evangelista, Claudia Schiffer and Christy Turlington—Moss was a contrast, having a more child-like, waif look. Opponents called it ‘heroin chic’.
Moss received some notoriety for her skinny frame after appearing on the cover of The Face in 1997. She then modelled in advertisements for Calvin Klein underwear and appeared nude for the Calvin Klein fragrance, Obsession. She has been immortalized in sculpture in two sculptures by Marc Quinn, the first in 2006 called Sphinx, followed by a second in 2008, in gold, called Siren.
Moss will appear in Playboy’s 60th anniversary issue in January, and a preview image, shot by Mert Alas and Marcus Piggott, has already been released.
She has been romantically linked to Johnny Depp, Jefferson Hack (the father of her first child), Billy Zane, Leonardo di Caprio, Mark Wahlberg, Daniel Craig, Jake Chapman, Mario Sorrenti, Evan Dando, Jesse Wood, Antony Langdo, and Pete Doherty. In 2011, she and Hince tied the knot.
Through the years, Moss has defied expectations, shattering the predictions of those who believed that models would only have a certain, limited working life, and recovering from a tabloid exposé about cocaine use that could have permanently damaged a lesser model’s career. She has shrewdly created her own brand, licensing it in co-branding situations, most notably with Topshop. She has her own collections with Longchamp, Fred and Rimmel. And she continues to endorse products and serve as the face of international brands, thanks in part to her work ethic and knowledge, and to a unique look.
The Council calls her ‘fearless and intuitive’ when choosing her projects. Others sought by the BFC for comment included photographer Mario Testino, with whom Moss has collaborated numerous times, who said, ‘Kate Moss has made many people dream. And not only people that look at fashion but those that create it as well. The moment she puts on an outfit, it takes another identity. She adds personality to fashion and I personally, can never get enough of her.’
Donatella Versace said, ‘From the very beginning Kate was iconic; she never had to become a model. She has the same energy, the same seduction and the same wit—in front of the camera and with everyone, I love you Kate!’
The BFC stated, ‘She has worked with every designer of note, including McQueen, Galliano, Marc Jacobs, Stella McCartney, Saint Laurent, Dior, Calvin Klein, Chanel, Louis Vuitton, and her editorial still sets the benchmark high in terms of sheer versatility, originality and its ability to communicate the aspirations and realities of many generations. Her work with Corinne Day at the age of 15 remains instrumental in shaping the face of the fashion industry, and Kate is synonymous with the spirit of British innovation.’
It also notes that Moss is the most prolific Vogue cover girl, appearing on 34 covers for British Vogue alone. She now serves as a contributing fashion editor for the magazine, with her first story appearing in the spring.
Moss won Model of the Year at the British Fashion Awards in 2006, and received the London 25 award at the same event in 2009.
The British Fashion Awards, hosted by the BFC, takes place on December 2 at the London Coliseum. Nominees this year include Marc Jacobs, Anya Hindmarch, Victoria Beckham, Mary Katrantzou, Raf Simons, Nicholas Kirkwood and Cara Delevingne. Tickets are available through www.britishfashionawards.com/tickets. Lucire will have post-event coverage.