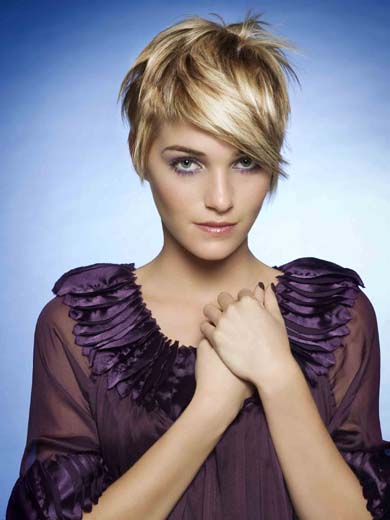 Caleb Alex from Servilles in Newmarket has been crowned New Zealand Hairdresser of the Year after taking out the Supreme Award at the prestigious L’Oréal Colour Trophy Awards last night (August 2).
At a glittering event attended by the country’s top stylists and celebrities, Caleb was chosen from seven other Supreme Award ﬁnalists wowing the judges with his cropped feminine hairstyle with warm blonde colouring.
The L’Oréal Colour Trophy Awards were judged live in Auckland by a panel of three of the world’s leading hairstylists—UK-based Guy Krémer, South Africa’s Terence Jansen Van Vuuren and Caterina DiBiase of Australia.
Mr Van Vuuren says Caleb’s look displayed outstanding attention to detail with beautifully crafted colouring enhanced by a superb cut.
‘This forward thinking design is original and unique. It is the beautiful marriage of texture and colour that captures the spirit of today’s look.’
Australian judge Caterina DiBiase says New Zealand hairstyles are at the cutting edge of global fashion trends inspired by the new direction towards shorter styles.
‘Internationally we’re seeing strong lines, soft texture and lots of colour and those trends are well and truly reﬂected in what we have seen today at New Zealand’s L’Oréal Colour Trophy Awards.’
L’Oréal Colour Trophy is the only hairdressing competition in New Zealand that requires finalists to go head-to-head in a live competition and re-create their photographic entry on the day of the awards.
The judges score entrants on creative and evocative hair colour, an innovative and fashion-led cut, inspired hairstyling and the ﬁnish and overall look of fashion and make-up.
Runner-up in the Supreme Award was Auckland’s Sasha Lenski from Bettjemans Salon in Orakei.
Three other individual awards were also announced. The Young Colourist Award went to Maree Thompson from Venom in Invercargill while the Couleur Pour Hommes Award (colour for men) was presented to Aimée Packer from Servilles in Albany (Auckland).
Gabriella Andersson from Servilles Newmarket (Auckland) took out the Au Début Award, presented to a hairdresser who has never been a ﬁnalist in the awards before.
The Salon of the Year Award went to Bettjemans (Orakei, Auckland) and four special Awards were also announced including the People’s Choice Award, the Photographers’ Award, the Hairdressing Magazine Award and the Fashion Magazine Award.
L’Oréal Professionnel general manager Rachel Neill says she is rapt with the vibrancy and creativity displayed by the winners.
‘Each year, we continue to be blown away by the high calibre of entries and winners. It shows that diversity, ingenuity and style are alive and well in our industry.
‘L’Oréal Professionnel is committed to supporting and inspiring New Zealand hairdressers. These awards are a great way of doing just that—encouraging and recognizing those who push the boundaries of creativity in our industry.’
More than 1,000 of New Zealand’s leading hairdressers, celebrities and fashionistas celebrated the award winners in style. The show was hosted by Petra Bagust and Peter Urlich.
More on L’Oréal Colour Trophy appears in the next New Zealand print edition of Lucire.