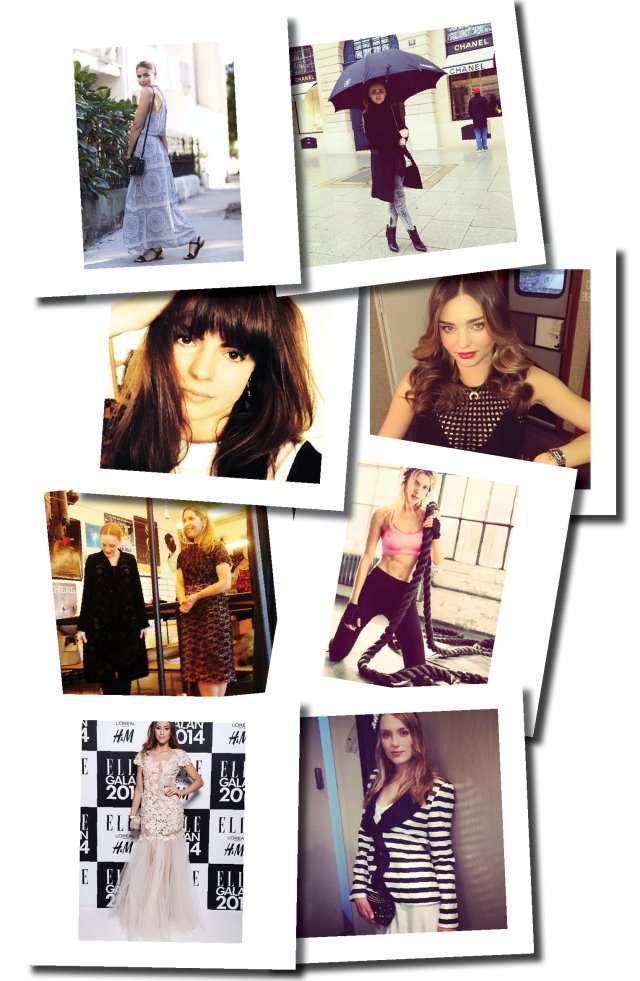 Kicking off this week’s most interesting and stylish Instagrams is Australian blogger Sara Donaldson of Harper & Harley, photographed by Ana Suntay-Tañedo. Finding the ideal outfit for summer work and socializing is a toughie, especially with the longer days—so to solve this, Donaldson has chosen an ensemble of a Zimmermann dress, Windsor Smith sandles and a Givenchy bag, encapsulating the season’s look well.
But it’s not summer everywhere. Kristina Bazan of Swiss blog Kayture headed to Paris to shoot a fine jewellery video for Love Gold, and she is snapped outside Chanel at the Place de la Vendôme. The look’s spot on, with the Chanel umbrella, but it’s the pairing of a black coat with stonewashed skinny jeans that’s particularly chic for the cool, zero-degree temperatures in the French capital. (You can see more of the Love Gold shoot on Bazan’s blog.)
On the subject of black coats, our own Instagram shows the Royal New Zealand Ballet’s principal guest artist Gillian Murphy trying on a Tamsin Cooper coat, especially designed for her. Murphy liked the elegance and practicality of the coat and picked it over two others that Cooper had brought up. Cut at knee length, it’s ideal for this winter.
The black-and-white trend is really emerging this week. Judged the most influential blogger of the year, Kenza Zouiten has shown off her outfit for the Elle-galan (the Swedish edition of Elle had a gala earlier this month). You can see Zouiten’s own photos in a larger format—she wears a stunning dress by Ida Sjöstedt with a clutch by Malene Birger, and pulls the look off immaculately.
And coming back to summer, our own fashion editor Sopheak Seng successfully styles with black and white stripes for the races, as he dressed models for the Wellington Cup’s barrier announcement on Wednesday. Taken behind the scenes is one of his models, from Kirsty Bunny Management, wearing Deryn Schmidt, available at Kirkcaldie & Stains.
While our own Anna Deans is away today, we thought we’d cheekily check in to her ’Gram to see her latest hairstyle, which she posted during the week. It’s inspired by Brigitte Bardot—and she means the youthful French icon rather than the right-wing activist. Australian model Miranda Kerr, meanwhile, has shown off her make-up by Lisa Storey and hair by David Keough, both of Los Angeles, with bright lips and the apples of her cheeks highlighted—skilfully. Both these images, and some of the others that are coming through from cosmetics’ companies, are indicative of a more purposeful make-up look in the Zeitgeist over the natural face.
Doutzen Kroes, meanwhile, has gone on her Instagram to promote the Victoria’s Secret Sport line, which she also promoted in person last week in Florida. It’s a bit of fitspo this week to get you pumped for the weekend!