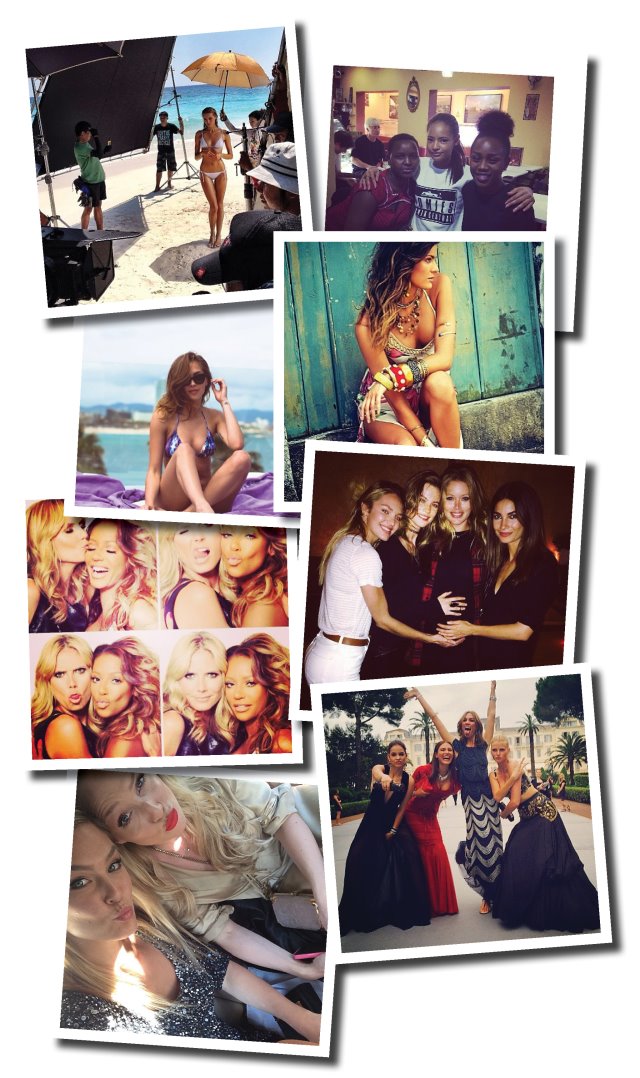 With summer officially arrived in the northern hemisphere, the stylish Instagrams out there are getting more social.
Barbara Palvin, who is our latest model obsession, posted a shot from the Hôtel du Cap-Eden-Roc prior to the AmFAR Gala, coincidentally the same as the one we published through another source. The model appears alongside Lara Stone, Karlie Koss and Bianca Balti. There are more formal shots, but we love this one for its energy and candidness.
Doutzen Kroes has also gone for a group shot of four as summer begins, sharing a photograph with fellow Victoria’s Secret Angels Candice Swanepoel, Behati Prinsloo and Lily Aldridge. Kroes, currently pregnant, is pictured with her fellow models holding her baby bump. Kroes, 29, is expecting her second child in July, with husband DJ Sunnery James.
Heidi Klum is only posing with former Spice Girl Mel B, but has posted four images in one on her ’Gram, as the singer celebrated her 39th birthday in California. Klum, who turns 41 on June 1, gave Brown a shout-out with ‘Love U’ on her Instagram.
Our other model obsession, Malaika Firth, has been hanging with two ‘Kenyan buddies’, Nellie Kim and Jesca, at Kenya Coffee House in Romford, a café which partners directly with coffee growers in Kenya, and claims to go further than Fair Trade. It’s great to see Firth support an ethical retailer, using her fame to do so.
Isabeli Fontana, meanwhile, is promoting one of the brands she models for, Morena Rosa, based in her home country of Brazil. Fontana has modelled for Morena Rosa for some time, which she calls one of her country’s most beloved brands. The label reached the million-fan milestone on Facebook, giving Fontana a reason to celebrate on her ’Gram.
It’s also a beachy scene for model Valentina Zelyaeva, as she gives a glimpse behind the scenes at her Piz Buin campaign, directed by Anders Hallberg with Peter Riis helming the photography. Similarly, influential Swedish-based blogger Kenza Zouiten shows off her figure on the beach in Barcelona in a bikini top by IvyRevel.
Finally, Bar Rafaeli and make-up artist Moran Stavizki wish fans ‘Shalom Shabbat’ as the weekend begins.