CK One and CK One Shock have a TV ad mash-up that débuts tonight on UK screens. Both fragrances—the original 1990s version and the 2011 ‘rebellious’ Shock spin-off—are promoted in the high-energy ad, which features Lara Stone (whose husband, David Walliams, Tweeted last week, announcing that she is pregnant) and Abbey Lee.
Another iconic brand, Absolut, has released Absolut Unique in the New Zealand market. Each of the bottles is uniquely designed and individually numbered, decorated with bright colours and patterns. No two bottles out of the four million run are the same, and New Zealand will receive 4,800 of this run from November 2012 at leading liquour outlets (from NZ$54·99).
Staying in New Zealand, one of our favourite designers, Adrienne Whitewood, is retailing at the Living Room Collective on 1149 Eruera Street, Rotorua, alongside others selling homeware and giftware. Her summer 2013 range, Taniko, has been inspired from traditional taaniko with hand-printed borders on light summer fabrics such as silk tissue, cotton–silk blends and Tencel. The colour palette has been inspired by Whitewood’s Rotorua home.
Finally, Victoria’s Secret has reopened its flagship Herald Square store in New York in time for the holiday shopping season, with the help four of its Angels, Adriana Lima, Miranda Kerr, Candice Swanepoel and Lily Aldridge. The redesigned three-storey, nearly 8,000 ft² store features black cherry hardwood and marble floors, sculpted pink surfaces with accents of black chrome, and custom ribbon chandeliers adorned with Swarovski crystals. Every floor features video screens playing the Victoria’s Secret Fashion Show, recent spots and footage. The next instalment of the show is on December 4, on CBS, airing at 10 p.m. EST (9 p.m. CST). 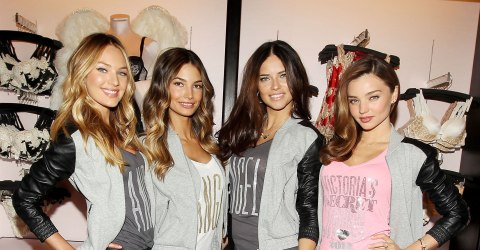