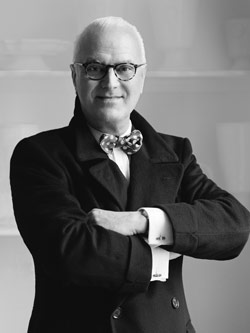 The British Fashion Council has announced that Manolo Blahnik, CBE, whose name is intimately associated with high-end footwear design, will receive the Outstanding Achievement Award at this year’s British Fashion Awards.
‘This special award celebrates and recognizes one designer, who throughout their career, has made an impact on the global fashion industry,’ says the Council.
The Canary Islands-born designer was educated in Switzerland and Paris, before moving to London in 1968. Vogue’s legendary editor, Diana Vreeland, advised Blahnik that he should design only footwear. In 1972, Ossie Clark invited him to create shoes for his collection. He bought out a boutique, and set up shop in his own name in 1973.
His name entered popular culture thanks to the TV series Sex and the City—it was a favourite of the fictional Carrie Bradshaw—but even in the 1970s, those in the know sought Manolo Blahniks, including Marisa Berenson, Jane Birkin and Charlotte Rampling. Among more recent names are Kate Moss, who wore Blahnik’s designs for her wedding, and Naomi Campbell.
Blahnik’s career spans almost 40 years and had won the Accessory Designer of the Year award at the British Fashion Awards in 1990, 1999 and 2003. He continues to design the shoes that bear his name.
His flagship store remains in Chelsea, London, and Blahnik resides in Bath. He was awarded the CBE in 2007.
‘It is a great honour to be receiving this award from the British Fashion Council. To be recognized for doing something I love is really wonderful,’ Blahnik said in a release.
The British Fashion Awards will be held at the Savoy on November 27.