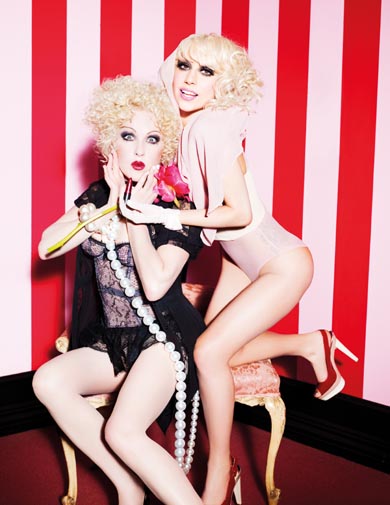 MAC has unveiled its latest Viva Glam campaign, featuring Lady Gaga and Cyndi Lauper. Proceeds from the sale of its Viva Glam VII lipsticks will beneﬁt the MAC Aids Fund.
The spring 2010 edition sees two new lipstick shades, with a light coral red lustre bearing Lauper’s name and a light blue–pink lustre with Lady Gaga’s.
The collection hits counters on March 1, retailing at NZ$40.
The MAC Aids Fund will announce $2·5 million in new donations to fund model programmes that address the vulnerabilities and inequities that place women at increased risk for HIV and Aids, says the company.
To date, the MAC Aids Fund has already raised over $150 million to combat HIV and Aids.
‘I think it’s absolutely insane that some people have fewer rights than others, and I’m grateful that MAC has decided to focus on women while I’m a Viva Glam spokesperson. I have so much to say and so much to share, and I’m going to let my lips and lipstick do the talking!’ says Lauper in a release.
‘I’ve been familiar with the campaign and have been wearing MAC since I was 10 years old. To be joining the likes of iconic former Viva Glam spokespeople is an honour. My new Viva Glam lipstick colour is amazing. It’s very me—a bluish pink, great for every day, a little bit ’80s. I hope that women buy this lipstick, and honour themselves and honour the cause,’ says Lady Gaga.