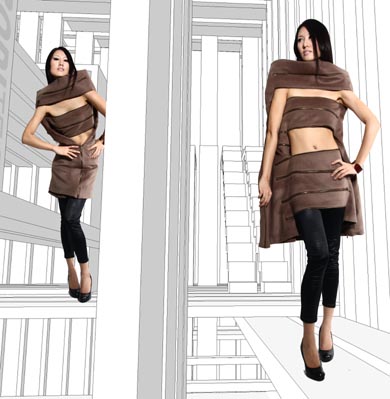 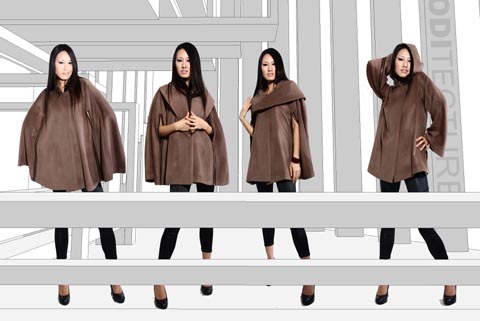 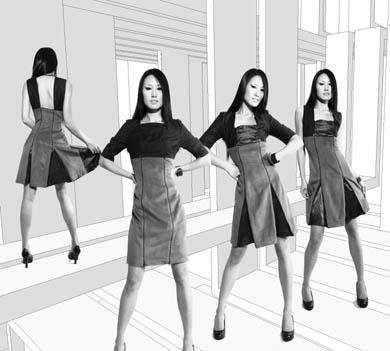 Wen Guo, an architect from San Francisco, drafts building and ﬂoor plans with impeccable precision. However, she not only designs buildings, but apparel as well. This unconventional designer symbolizes an innovative new generation—one who thinks outside the box while embracing her environment.
Guo’s architectural designs offer a structural product that provides well thought-out functionality. Like architecture, Guo builds her designs with the intent of abandoning the transitory for more permanence by creating quality clothing with a long lifespan. Some may call her a fashion artist, designer, or architect but Guo calls herself a ‘Boditect’.
Boditecture, the name of her clothing line, offers tailored looks for the a.m.–p.m. female (a working woman who transforms herself from social sophisticate to forward-fashionista). As a result, Guo designs with a go-green attitude by using items such as plastic bottles and other recycled materials to produce some of her garments. She also uses fabrics that are stain-resistant and even incorporates metals commonly used in furniture and buildings.
This way, Boditect apparel is geared toward maximizing efﬁcacy by consuming fewer raw materials. For example, mere zippers and seams transform separate ensembles into items that may be later worn as jackets or dresses.
Seeing fashion as architecture is not out of the ordinary when it comes to Guo. Her perception is that architecture and fashion design are synonymous—design must function to support and comfort the body. ‘When I design clothing I don’t only look at the surface pattern and decorative quality, but [I also look at] the way fabric relates close to the body, the movement, and structure,’ Guo says.
Guo’s garments are more practical and functional than average because she understands the mathematics as well as the art forms used in creating an article of clothing. Therefore, all style lines and adornments on her garments are intentional and serve a purpose. ‘I believe in form following function. Less is more,’ she says.
Guo is inspired by some of the most inﬂuential and respected designers, such as Mies van der Rohe, Todao Ando, and Herzog de Meuron. As a result, her creations will only continue to get better with time.
At 28, Guo has already designed and worked on high-rise buildings from California to China and has been nominated for Best Asia Design for an interior solo project.
So, what’s next on Guo’s accomplishment list? Well, let’s just say that this young woman looks forward to expanding her skill as a designer.
For orders or enquiries contact wen