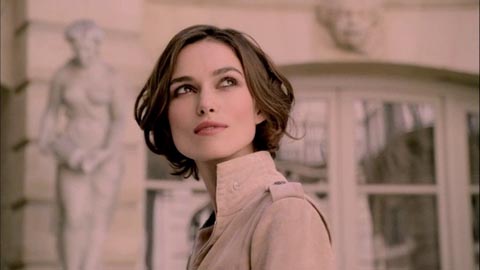 As day breaks, golden sunlight bathes over a slumbering Keira Knightley. A Joss Stone version of ‘It’s a Man’s, Man’s World’ starts just as she awakens, and the scene is set. Keira, who is vamping up her role in a short ﬁlm for Chanel directed by Pride and Prejudice’s Joe Wright, gets up, wrapped in only a bed sheet and sensually dabs the Coco Mademoiselle scent across her collarbone, before making her way to a photo shoot dressed in a blush-coloured catsuit complete with matching motorcycle and helmet.
As she hastily makes her way through a quiet Paris, illuminated by the early morning sun, beautiful imagery of la Place Vendôme and Parisian streets ﬁll the screen before arriving at her destination.
As the photographer (played by Argentinian actor Alberto Ammann), draws the curtains and clicks away, Keira suggestively lowers the zip on her cat-suit while posing on a dishevelled bed. It is hard for them to deny their attraction to each other as he slowly undresses her and continues to photograph her lounging on the bed once again wrapped in only a bed sheet.
Just as he lowers to plant a kiss on her lips she coyly suggests he lock the door, then the scene ends abruptly, but not in the way you would expect.
It seems that even though it may seem to be a ‘man’s world,’ that is not so for Coco Mademoiselle, who always does as she pleases.
This full version of the Coco Mademoiselle advertisement, lasting over three minutes, broke March 21, after Chanel issued teasers on March 10. The French version differs only in the single subtitle, as Knightley beckons Ammann to close the door.—Vicki Matias