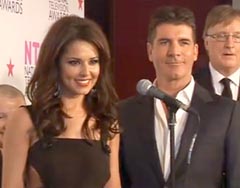 Academy Award-winning actress Kate Winslet wears Stella McCartney to the première at the Ziegfeld Theatre in New York of Mildred Pierce, her new HBO series, in which she stars opposite Guy Pearce.
She accessorized her look with a bag from Calvin Klein.
Winslet compared her experience making the TV mini-series to a ﬁve-hour ﬁlm.
The series débuts March 27 on HBO.
In ITN’s other entertainment news, Simon Cowell says that Cheryl Cole—Britain’s sweetheart, as the UK media seem intent on appending to her name—remains in the running for a judging position on the American version of The X Factor. The question is: if some US viewers needed subtitles for Life on Mars and Taggart (though none we actually know, who are as puzzled by these), will they do this to the Geordie songstress?
For our money, Cole knows what she’s doing, and Cowell would be foolish to cross her off his list.