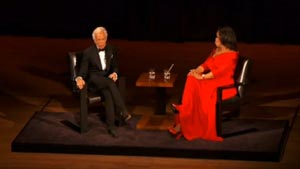 A Monday night event for the Ralph Lauren Center for Cancer Care and Prevention at Lincoln Center featured, as its principal attraction, a heart-to-heart on-stage chat between Oprah Winfrey and Ralph Lauren himself.
Attended by celebrities including Naomi Watts, Michael J. Fox and Tracy Pollan, Uma Thurman, Jessica Alba, Kerry Washington, Martha Stewart and new daughter-in-law, Lauren Bush.
Bush says, ‘It gives extra meaning and specialness now, being part of the family.’
Alba called Lauren, ‘Classy, elegant but still accessible.’
Washington called him, ‘A cultural icon. There’s no part of your life that can’t be infused with Ralph Lauren.’
The event raised over US$7 million.
Winfrey, herself donning a startling red Ralph Lauren gown, called the designer an ‘extraordinary man’.
Lauren talked about how he preferred to create designs with style, rather than follow trends.
‘I sort of believe in things that last. You can call it oldness, it’s not really oldless. It’s things that last, that you cherish, treasure … that age well. I feel that that is part of the integrity of owning things and savouring things.’