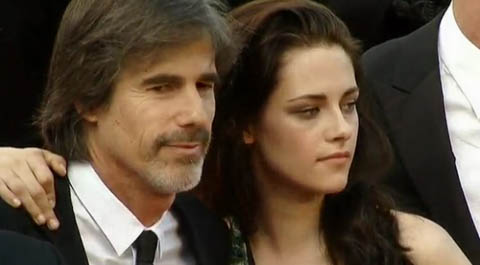 Yesterday was the day for Twilight fans at the Festival de Cannes, as both Robert Pattinson and Kristen Stewart showed up on the red carpet.
Stewart arrived at the Cannes Film Festival in Balenciaga to promote On the Road, the Jack Kerouac story from 1957 which the author had hoped would star Marlon Brando. It has taken 55 years to get to the silver screen.
The characters Sal Paradise, Dean Moriarty and Moriarty’s wife Marylou were based on Kerouac, Neal Cassady and LuAnne Henderson. Cassady was consulted on the new film, with Brazilian director Walter Salles at the helm and Roman Coppola as producer.
The film is one of 22 films in competition for the Palme d’Or, to be announced on Sunday.
Garrett Hedlund, Kristen Stewart, Viggo Mortensen, Kirsten Dunst, Amy Adams and Steve Buscemi are among the cast.