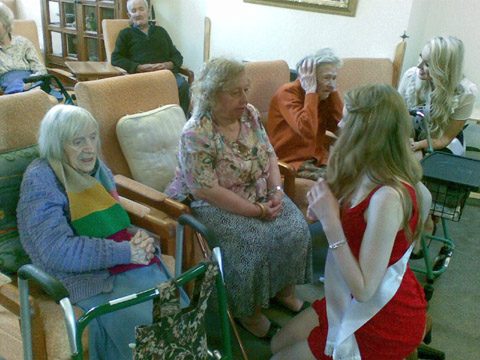 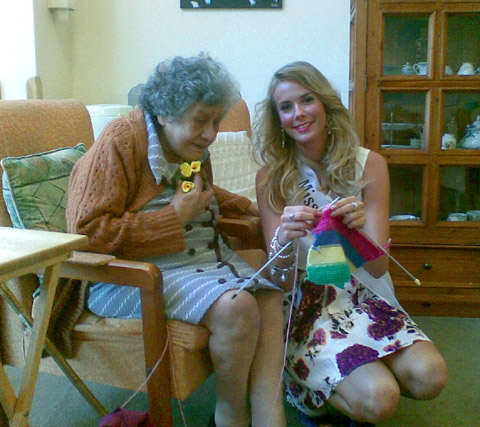 The second full day of Miss Universe New Zealand was probably the busiest of the week, other than the final night on the 3rd. The contestants had their first official engagement with Deputy Mayor Ian McKinnon and Councillor Ray Ahipene-Mercer, both of whom had wise words to give to the ten ladies in Wellington this week.
The Deputy Mayor has his choice again for 2012, but good manners prevent me from revealing her name.
This was followed by a visit to the office of the Hon Maurice Williamson MP in the executive wing of the Parliament Buildings. Williamson was chosen by pageant director Val Lott as her local MP. In an event closely mirroring those of 2010, the Minister introduced a point of order in the House to acknowledge the contestants in the gallery—though Speaker of the House Dr the Rt Hon Lockwood Smith was not too sure whether it was a valid one. However, he did acknowledge Miss Wellington Lauren Mann, whom he knows through surf life-saving.
Apart from the brief exchange, Question Time followed the usual agenda, kicking off with Dorothy Dix questions from the Hon Nick Smith MP, while, as expected, all 10 respected the dignity of the proceeding as in the 2010 visit. In the interests of political fairness, the contestants stayed not just for the easy questions from the government, but for some from the Labour MPs and two questions from the Greens’ Dr Russel Norman MP.
The visit to the Kilmarnock Heights Home followed, visiting Ivy, the Home’s oldest resident at 105, for the third consecutive time. Second-oldest, an Irish New Zealander named Archie, recited poetry to Miss Auckland Jennifer Lambly, who celebrated her 22nd birthday today, while a former New Zealand Ballet pianist, Merle, also a resident, actually wound up entertaining the contestants on the ivories.
Suzanne Purser from Clinique and former Lucire fashion editor Samantha Hannah gave beauty and styling tips respectively in the evening, after celebrating Miss Lambly’s birthday.
Everyone is settling in to the week and friendships are being forged. Three of the six main judges have met the contestants now, as has one guest judge, but our deliberations are yet to begin. May Davis, the former Miss South Africa runner-up who joins me on the judging panel again, arrives tomorrow, and I will be interested to hear what she says.
Most years, a contestant wins because she has one quality over and above her rivals. After two days, we usually have not identified this yet. This year is no exception. So far, all I can see is a group that is steadily gaining confidence, as well as an understanding of how politics (both in the governmental and interpersonal senses) works. They have made strides in their public speaking skills, even between the Council and rest home visits after feedback in the interim. Each is bringing a unique set of qualities to the plate, but in whom the X factor lies is anyone’s guess.
Meanwhile, an informal online poll has been put on to the official Miss Universe New Zealand Facebook page by social media agency Catalyst90.—Jack Yan, Publisher