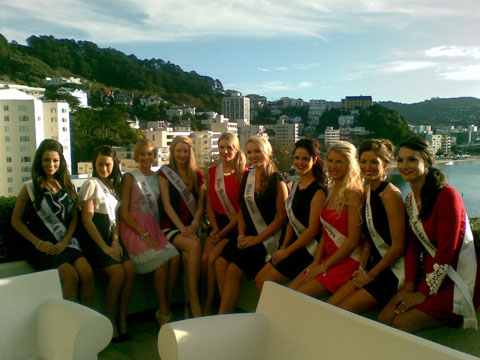 Earth 174, the natural skin care range by film make-up artist Kareen Holland, delivered its gift packs to the Miss Universe New Zealand contestants today. The winner will win a $2,500 voucher for services, plus have the opportunity to appear in Earth 174 publicity, so as far as beauty prizes go, it’s a generous one from an ambitious, independent company that we’ve seen grow over the last three years.
It was a hectic day for me, rejoining my fellow judges May Davis and Samantha Hannah this morning and accompanying our 10 contestants to Farmers Lambton Quay. Each armed with a bottle of perfume, which they were allowed to keep this year, our contestants interested customers in new scents, ranging from Lancôme Trésor in Love to Purr by Katy Perry, to which I retorted, ‘Katy Perry used to be a good Brand.’
There has been a changing of the guard at Farmers Lambton Quay, with Herman morphing in to Chanel, who now manages the store, and Lincolnshire’s Michelle turn into Yorkshire’s Carlene, heading the cosmetics’ department. Beverley Benton, a Farmers’ institution at 84 years of age—and still going to work behind the counter four days a week—was also present today, and became the focus of attention briefly.
Catalyst90 live-streamed a series of interviews from Farmers today via the Miss Universe New Zealand Facebook page, and we received the good news that the final night will also be live-streamed via Facebook by Tom Reidy and his crew.
A quick visit to my friend of 30 years Maitland Waters for some extra photographs followed, after which I collected Lucire fashion editor Sopheak Seng and our fifth judge, Danijela Unkovich, Miss Universe New Zealand 2010 runner-up.
Sopheak’s styling of the contestants at the pageant’s evening show at the Upper Hutt Cosmopolitan Club, compered by Rebecca Grant, featured Danish label Noa Noa (which went down magnificently with the crowd as well as May on our judging panel), and Australian brand Lemonade on the Lawn (which took Miss New Zealand choreographer Sarah Melville-Smith down memory lane to the TV series Peppermint Twist). Tarocash, Rasha Taylor Couture and Shika Braddock Couture also featured. The house was entertained by Avidiva in to midnight. Photographs will soon be available via Emotif Photography’s website, thanks to David Duffy.
Tonight was the first night this year where we have had five judges sitting in a formal setting with our forms out, plus Shika Braddock monitoring eveningwear (not just hers) for the category prize. Carl Manderson, Samantha Hannah, May Davis, Danijela Unkovich and I have been making our notes, and we’ll be deliberating in some depth after our final judge arrives in Wellington.
On Friday, Dr Wayne Morris joins us, and he will have a baptism by fire as he begins the intensive (and somewhat infamous) interviewing sessions with us the moment he arrives at the Museum Art Hotel.—Jack Yan, Publisher 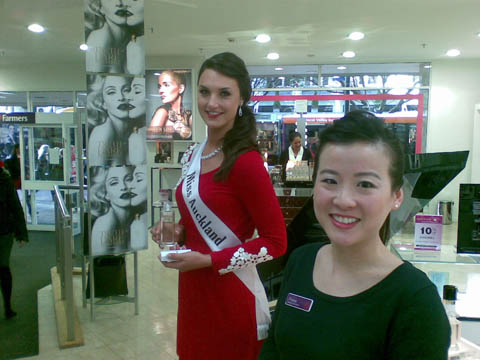 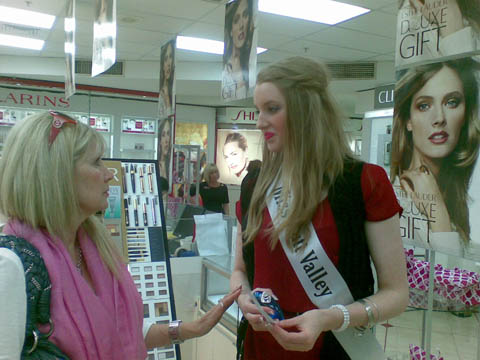