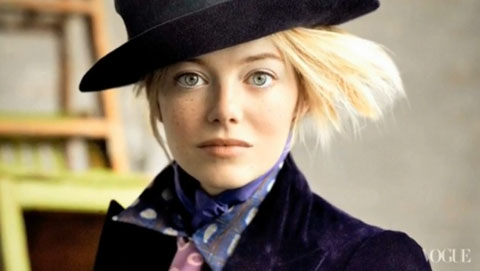 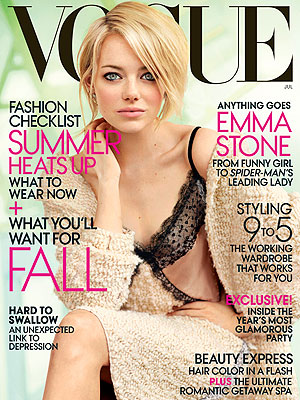 Emma Stone calls her Vogue cover shoot for July ‘one of the easiest shoots I have ever done’.
The shoot, by Mario Testino, first had its cover image leaked online two weeks ago.
Stone says that the experience was ‘still, to me very bizarre. It looks to me like a different person.’ She also revealed she enjoyed the ‘Mad Hatter suits and the top hats.’
ITN has official Vogue clips from the shoot, as well as sound bites.
In the cover image, Stone wears Nina Ricci. The type reads, ‘From funny girl to Spider-Man’s leading lady.’
Vogue says the cover story has Stone recounting her childhood dreams come true, ‘confesses to a history of panic attacks and how she learned, growing up in Arizona, to channel that anxiety into laughter … and reveals how she launched into acting at the age of fourteen … That may have been her first major performance—now, as Spider-Man leaps into theaters, we’ll see her hanging from the precipice, perfectly poised for her next big moment.’
This is Stone’s first cover for Vogue, though she has appeared in the magazine before. She was also on Teen Vogue’s cover in September 2011.