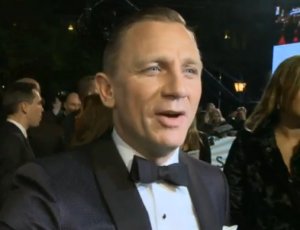 Our videos from the Skyfall première are below, featuring interviews with star Daniel Craig, who briskly goes through the questions; Javier Bardem, who says he did not reference any of the previous villains and that it was a joy to work on the movie with Craig and director Sam Mendes; and Dame Judi Dench, who humorously says she could not possibly manage Craig as he is ‘wayward’ and a ‘naughty boy’.
Two earlier videos are also featured that had not run at Lucire earlier: interviews with Craig and Bardem discussing the film. The three-minute interview with Craig—far better than the red-carpet piece—discusses how he had seen a rough cut and that it was ‘very weird’ when seeing himself the first time. He also says that as his third Bond, he feels more comfortable with the role and ‘really give it something’ and ‘stamping a mark on it’. Several clips from Skyfall are included in the interview segment. Craig says there was more humour thanks to the writing and ‘I’d love to make another one.’
Bardem spoke highly of the script and that ‘it looked like a good chance to take.’ He says the villain he plays, Silva, is a complex man with a look that had to match the ‘uncomfortableness’ of his character.
Further images can be seen at Lucire’s Tumblr.