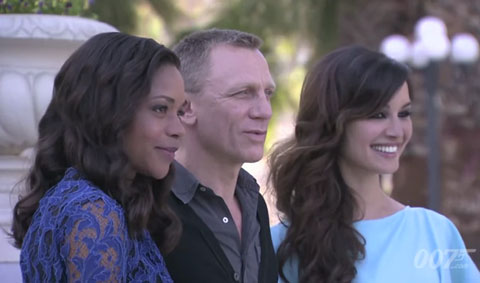 Eon Productions has released a video of the İstanbul, Turkey press conference for Skyfall, held at Ciragan Palace, on YouTube. Present were Ola Rapace, Bérénice Marlohe, Naomie Harris, Sam Mendes, Daniel Craig, Barbara Broccoli and Michael G. Wilson.
The Skyfall cast and crew have been shooting in Turkey through much of April. It is the third James Bond film to shoot on location there, after From Russia with Love (1963) and The World Is Not Enough (1999).
Craig himself had been to İstanbul before, 15 years ago, and noted the changes, particularly the traffic, but called it a ‘great city’. ‘It’s a privilege to be here … the welcome we’ve received has just been overwhelming.’
Director Mendes said, ‘We wanted to be here because it is the most magnificent place. It’s an incredible city. Obviously the goal is, in a relatively short sequence, to try to capture the essence of the country, both old and new, both its traditions and also its modernity … It’s an ever-changing, evolving city.’
Harris found the filming at Adana and the Grand Bazaar ‘fantastic … It’s been an extraordinary experience.’
Turkish media reported that the press conference attracted some criticism because no Turkish translation was provided.