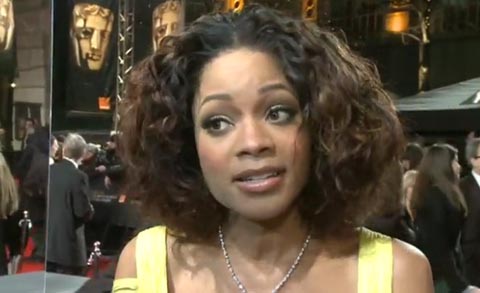 Skyfall actors Berenice Marlohe, Naomie Harris and Dame Judi Dench were on the red carpet at the BAFTAs on Sunday, and Harris gives an insight on ﬁlming in the UK, how’s she’s looking forward to the location shoots, and working with Daniel Craig and Sam Mendes.
Harris calls Mendes ‘one of the best directors I have ever worked with. He’s extraordinary and inspiring.’
The new James Bond ﬁlm will be released October 26 in the UK and Éire, and November 9 in North America.
Starring Daniel Craig, the ﬁlm also sees Javier Bardem, Dame Judi Dench, Naomie Harris, Bérénice Marlohe, Ben Chaplin, Albert Finney, and Ralph Fiennes in the cast.
The BAFTAs celebrated 50 years of the Bond movies, with Tom Jones performing ‘Thunderball’, the theme to the 1965 ﬁlm of the same name, at the ceremony.
Jones believes Adele would be ideal to sing the next theme.

One thought on “Naomie Harris talks about working on Skyfall, the 23rd James Bond picture”