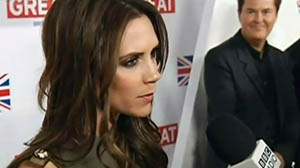 This year again, the British Consul-General in Los Angeles hosted a bash for principally British stars vying for an Academy Award. Present were Canadian Christopher Plummer (Beginners), (Northern) Irishman Kenneth Branagh (My Week with Marilyn) and Englishman Gary Oldman (Tinker, Tailor, Soldier, Spy), all up for Oscar gongs. Janet McTeer, Stephen Daldry, Victoria Beckham and Simon Fuller were among the celebrities invited.
Beckham wore a dress from her own collection.
Also in British entertainment news, Eon Productions has released some behind-the-scenes footage from the new James Bond ﬁlm Skyfall, showing director Sam Mendes at work. Dame Judi Dench, who plays M, says she is sworn to secrecy over the ﬁlm’s details, and would be ‘shot’ if she revealed anything.