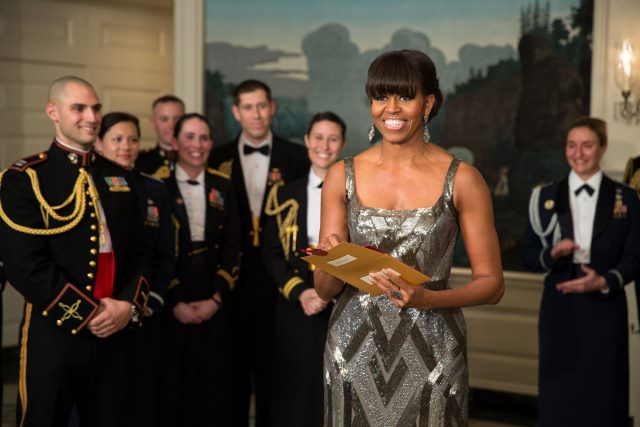 Above First Lady Michelle Obama reads out the Best Picture winner live from the White House. 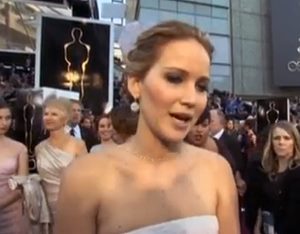 With the 85th Academy Awards concluded, Lucire has highlights from the telecast below.
Daniel Day-Lewis has become the first actor to win Best Actor three times, the third for his role in Lincoln. Argo, directed by Ben Affleck, continued its good fortune and won Best Picture.
Jennifer Lawrence took home the Best Actress prize for her role in Silver Linings Playbook, as she had at the Golden Globes and Screen Actors’ Guild Awards.
The actress tripped on her way up to collect her first Oscar, but composed herself, with her words on stage, ‘Thank you so much. This is nuts. You guys are only standing up because I fell and you feel bad. That was embarrassing.’
Austrian actor Christoph Waltz won his second Oscar, for Best Supporting Actor in Quentin Tarantino’s Django Unchained. Tarantino himself won for Best Screenplay.
Taiwan-born director Ang Lee won best director for Life of Pi.
As predicted, Anne Hathaway won Best Supporting Actress for her role as Fantine in Les Misérables. Amour has won best foreign film. A teary-eyed Adele, and fellow songwriter Paul Epworth, have picked up Best Song for Skyfall.
Earlier today, Kelly Rowland showed a lot of leg through her gown, Angelina Jolie-style, the video of which is below.
Wearing Christian Dior, Jennifer Lawrence, who has captivated audiences with her performance in Silver Linings Playbook, and who is up for Best Actress, talks about her relief at awards’ season ending. She says that she hopes that her film removed the stigma over bipolar disorder.
We also look at the gowns on the Oscar red carpet, as well as Bradley Cooper’s dinner suit. Anne Hathaway, Naomi Watts, Charlize Theron and Jennifer Aniston are highlighted, and there’s a distinct trend toward lighter colours this year. Kristen Stewart, Queen Latifah, Zoë Saldana and Octavia Spencer all went for whites and off-whites, too, in addition to Hathaway and Theron. Adele bucked the trend and look glamorous in black.
Additional videos from the ceremony proper include the cast of Les Misérables, including Anne Hathaway, Russell Crowe and Hugh Jackman, performing a medley; Tarantino, Hathaway and Lawrence accepting their Oscars; Adele backstage after winning for Skyfall; and presentation segments featuring Daniel Radcliffe and Kristen Stewart, Channing Tatum and Jennifer Aniston, and Mark Wahlberg and Ted. The final video is of director Ben Affleck accepting the Best Film Oscar for Argo, whose win was read out by First Lady Michelle Obama live from the White House.

Kelly Rowland at the Oscars

Adele backstage after winning her Oscar

Jennifer Lawrence trips as she collects her Best Actress Oscar

One thought on “Video: the 2013 Oscars, from red-carpet gowns to Jennifer Lawrence’s fall, and Argo’s win”