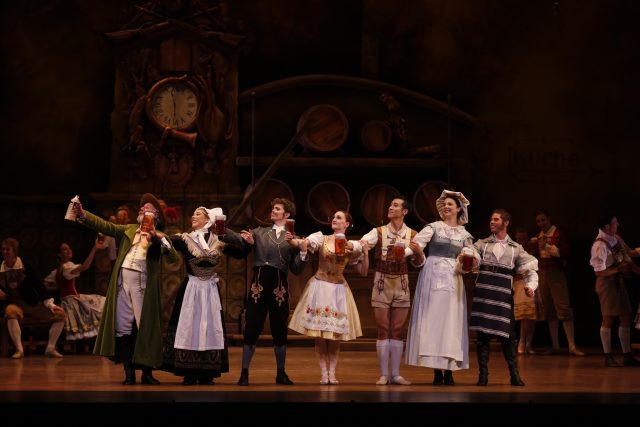 The Royal New Zealand Ballet’s trio of premières tonight in Made to Move at the St James Theatre was an enjoyable mixture of innovative and classical.
The first production, danced on a plain stage so audiences could focus on the work itself, was The Anatomy of a Passing Cloud, which fulfilled its promise of paying tribute to the Pacific and its cultures. Award-winning Venezuelan director and choreographer Javier de Frutos crafted a ballet that took historical Pacific Island sound clips, creating a work that was at moments tense, and evocative and respectful of the region’s cultures. Colourful costumes gave Anatomy a visually pleasing look, and there was a raw quality to the ballet.
De Frutos is known for his contemporary work, but there was enough in Anatomy to please traditional ballet-goers, with most sets having a dramatic quality.
While the Royal New Zealand Ballet has been known to progress from experimental to crowd-pleasing when showing three works in one night, we thought Andrew Simmons’ Of Days was the highlight of the evening. The Christchurch-born, Dresden-based dancer’s new work was beautiful, touching and emotional, with a strong foundation in classical ballet. Words appeared above the dancers, with a clever play on typography, sometimes occupying a single line, other times multiple ones, reading as poetry while the Royal New Zealand Ballet performed. Audiences were invited to reflect on their life directions, on love, and on their purpose.
The lighting deserves particular mention, especially how it complemented the outfits, at one point creating a harmonious glow to the stage. Of Days’ costumes, by Kate Venables, showed off the dancers’ physiques and personalized their performances. It was again danced to a relatively empty stage, with translucent backdrops used to highlight shadows, raised to reveal dancers, and lowered as screens on to which the type was displayed.
The sheer beauty of Of Days would have been strong enough to conclude the evening on a high, and it is our hope that it goes on to win awards.
RNZB artistic director Ethan Stiefel already prepared audiences last year when he talked about his Bier Halle, a comedic ballet that tied in with New Zealanders’ own love of beer. Having grown up in Wisconsin, itself known for brewing, Stiefel was inspired by the polka bands of his home state. Johann Strauss II’s waltzes and marches gave Bier Halle musical familiarity, and forced one to admire Stiefel for visualizing a new take on the score. His first original work for the RNZB started with plenty of laughs, but, at its core, is a traditional ballet with a particularly creative execution. The set elicited applause from the opening-night audience, and, as expected, Gillian Murphy—Stiefel’s fiancée—and Qi Huan were particularly expert lead players in a fun cast that included Sir Jon Trimmer, while Paul Matthews’ and Kohei Iwamoto’s roles, as the Nerd and Bird respectively, proved to be favourites.
It was the grand, uplifting ballet of the night, and the perfect finalé, with a big cast and the audience encouraged to clap along, but it must be said that Of Days’ beauty continued to resonate for us well after the evening had concluded.—Jack Yan, Publisher