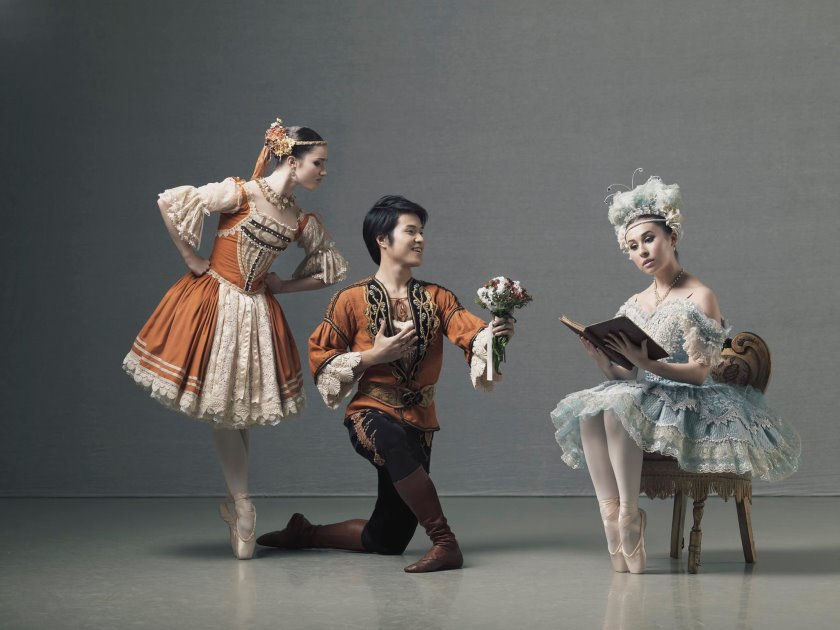 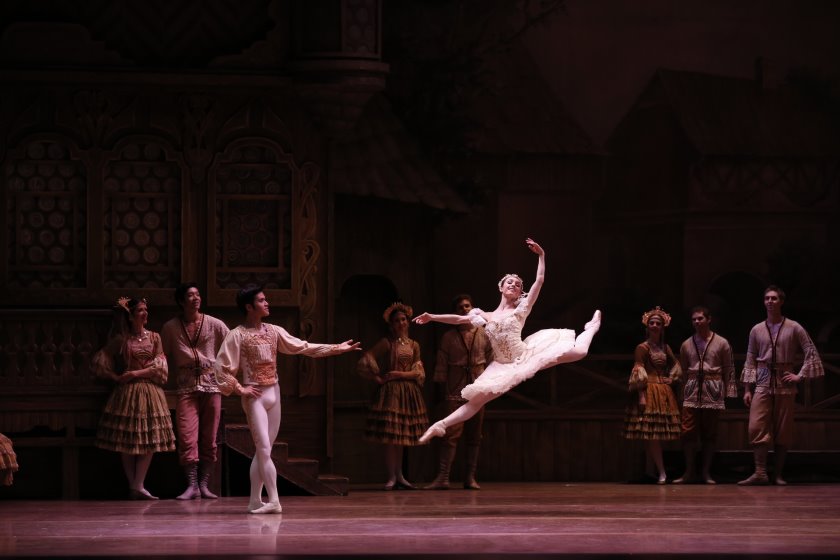 Top A publicity photograph from the Royal New Zealand Ballet for Coppélia, with Swanhilda, Franz and Coppélia. Above Kohei Iwamato as Franz and Lucy Green as Swanhilda from the première.

The Royal New Zealand Ballet’s Coppélia, which opened in Wellington on Thursday, is a lovingly designed and staged production that will suit family audiences.
Set in a mountain village in Hungary, the RNZB’s production of Coppélia retains its well known storyline and period setting, with beautiful sets and costumes. The work of the late, award-winning designer Kristian Fredrikson is particularly poignant in the second act, inside Dr Coppelius’s house, where his seven very distinctive automatons, as well as Coppélia, rest. Two incomplete mannequins hung from the top. The third act, with the wedding scene, is another testament to Fredrikson’s design ability, evident through the villagers’ and Franz and Swanhilda’s wedding costumes. Jason Morphett’s lighting lifted the story, making it easy to follow—and it was the second act, too, with its moody atmosphere, where his work shone.
Martin Vedel, ballet master on Coppélia, stayed true to the core of the story, with classical and folkloric dances playing out the plot. The energetic divertissements in the third act were perfectly performed. Vedel was, according to his notes, aware of the pre-modern, romantic period in which Coppélia was created, and sought to retain its beauty, but tightened up the storyline and more clearly portrayed Dr Coppelius—performed by Sir Jon Trimmer, who first danced it for the RNZB in 1964—as a social outcast.
The 21st-century touches are, then, in the theatrics of the performance rather than the look and feel, although the limbless, faceless automaton, beautifully performed by Paul Mathews, could feel at home in science fiction to modern audiences.
One cannot help but smile at the performances—after all, Coppélia is a happy, comedic ballet, and we noticed that the children on opening night enjoyed it as much as the adults. Lucy Green and Kohei Iwamoto were the well cast leads tonight, as Swanhilda and Franz respectively, dancing their roles expertly—and deservedly receiving standing ovations from some of the audience. Unsurprisingly, Sir Jon received similar acclaim, and Joseph Skelton as Zoltan, both in his emphatic solo and his dance with Katherine Grange as Ima, brought immediate reactions as well as loud applause at the end.
Orchestra Wellington faithfully performed the Léo Delibes score.
After Wellington, Coppélia tours to to Palmerston North, Invercargill, Dunedin, Napier, Rotorua, Takapuna, and Auckland, with the season ending on May 31 inclusive. Further information on dates and venues, as well as booking, can be found at the RNZB website.—Jack Yan, Publisher