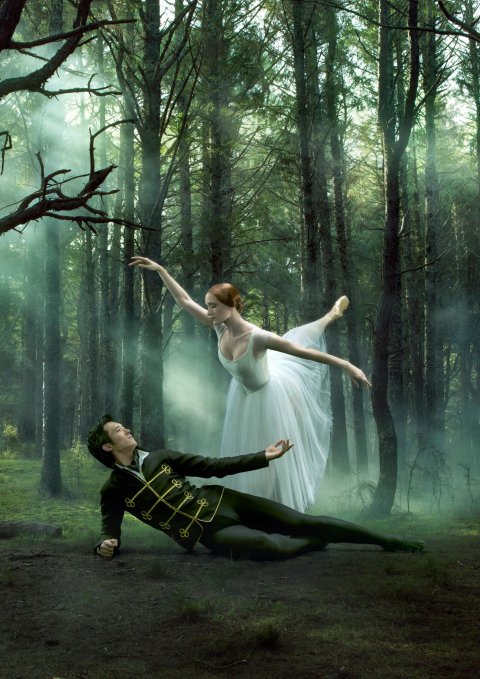 There was one face missing at the opening night of the Royal New Zealand Ballet’s TelstraClear Season of Giselle: that of the late David Carson-Parker. Mr Carson-Parker, a big supporter of the arts, was a familiar face to many Wellingtonians over the years, and I found myself looking for him before realizing that he would not be at the St James tonight. The Royal New Zealand Ballet evidently felt the same way, dedicating the Wellington performances to his memory.
The RNZB’s retelling of Giselle follows the familiar story, but it distinguishes itself through clever choreography (which I will come to), stunning costumes by Natalia Stewart, and Kendall Smith’s lighting (and lightning). Howard C. Jones’s scenic design gave Giselle a visual depth, using different shades to gain perspective, and making the production feel even grander in the already impressive St James Theatre. Transparency was also used to excellent effect.
The high standards in these areas complemented the outstanding choreography and production by RNZB artistic director Ethan Stiefel and Royal Ballet principal dancer Johan Kobborg. Stiefel and Kobborg, both of whom have danced the role of Albrecht, have collaborated brilliantly: scenes to watch out for include Giselle’s descent into madness after finding out about Albrecht’s betrayal, Albrecht’s dance with the Wilis, including a series of entrechats, and plenty of en pointe moves en masse by the Wilis. Opening night saw American Ballet Theatre prima ballerina Gillian Murphy, RNZB Principal Guest Artist, in the title role, in a stand-out performance; while Qi Huan danced the role of Albrecht and was on top form. Jacob Chown, as Hilarion, and Abigail Boyle, as Myrtha, should be noted for their supporting roles.
One could tell Michael Lloyd enjoyed conducting the Vector Wellington Orchestra through the Adolphe Adam score, and, as with the RNZB itself, a lot of love went in to the production. Lloyd will also conduct the Auckland Philharmonia when Giselle reaches there.
It is the RNZB’s first staging of Giselle since 2006. The TelstraClear season of Gislle is in Wellington from November 7 to 11; Christchurch, November 15–17; Invercargill, November 20–1; Dunedin, November 24–5; Auckland, November 29–December 2; Rotorua, December 5; Napier, December 8–9; and Palmerston North, December 12. Full details can be found at the Royal New Zealand Ballet’s website.
There was additional good news for Giselle as the New Zealand Film Commission is to create a feature film based around the Royal New Zealand Ballet’s production. The film will be produced by Matthew Metcalfe and directed by Toa Fraser, and will detail rehearsals, performances and other events surrounding the production.—Jack Yan, Publisher