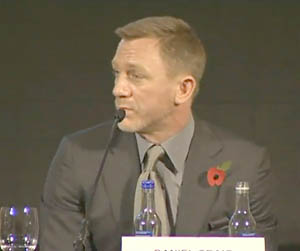 James Bond ﬁlm producer, Eon Productions’ Michael G. Wilson, wants incumbent Daniel Craig to make a total of eight ﬁlms, to beat Sir Roger Moore’s record by one.
‘Filming has gone very well so far and I’d love Daniel to surpass Roger’s record and do eight pictures. Daniel’s been an absolute pleasure to be around because he takes the role so seriously. There’s really no one more passionate about making these ﬁlms work than him—he’s a ﬁlmmaker’s dream,’ Wilson told People UK.
‘A lot of people have said Daniel’s been their favourite Bond since Sean Connery and I can’t argue with them. He’s doing a great job.’
Wilson’s half-sister, Barbara Broccoli, who produces the series with him, says Craig will ‘deﬁnitely’ make more.
Craig is currently ﬁlming Skyfall, his third outing as Bond, directed by Sam Mendes. Wilson has told the media that the latest movie has a more 1960s ﬂavour to it.
The actor himself said he would be ‘more than happy’ if he could do the role ‘for a few more years.’
Craig is the ﬁrst and only actor nominated for a BAFTA for his portrayal of Ian Fleming’s secret agent, in 2006’s Casino Royale.