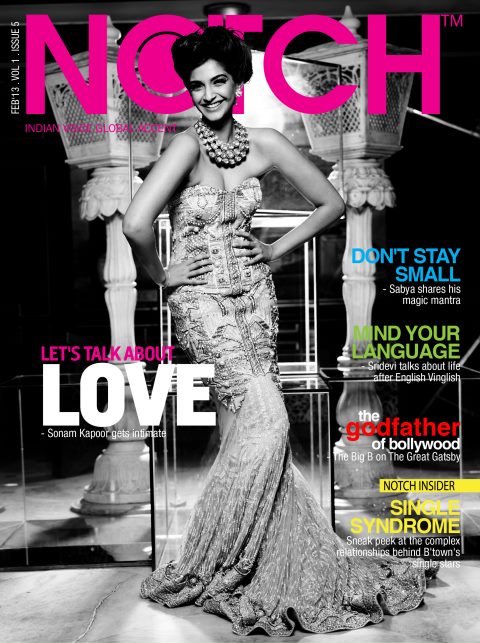 Actress Sonam Kapoor is the cover girl for the fifth issue of Notch, a free lifestyle and entertainment magazine that can be downloaded via Kindle, Ipad, Android and its own website at www.notchmag.com.
Kapoor was reportedly happy to be a cover girl for a digital publication: ‘The world has shrunk because of the internet and social media. Everything goes viral these days,’ she said in a release from Notch.
On her industry: ‘I think the boundaries of international or national cinema doesn’t exist anymore. Everybody is working everywhere—technicians come from abroad, technicians go overseas from India. It is the age of world cinema now and if there’s an opportunity with a good script and good role, I don’t mind doing any role in any language.’
She is right about those boundaries disappearing: Kapoor was in New Zealand for the Abbas–Mustan brothers’ Players, which we reported on during its first day of filming, and at Cannes for the Film Festival in 2011.
Joining her in the fifth issue are Sridevi, Amitabh Bachchan on working in The Great Gatsby remake, Oscar-nominated filmmaker Deepa Mehta on making Midnight’s Children, Sabyasachi on his collaboration with L Capital, two-time Academy Award winner A. R. Rahman, and Olympian Milkha Singh.