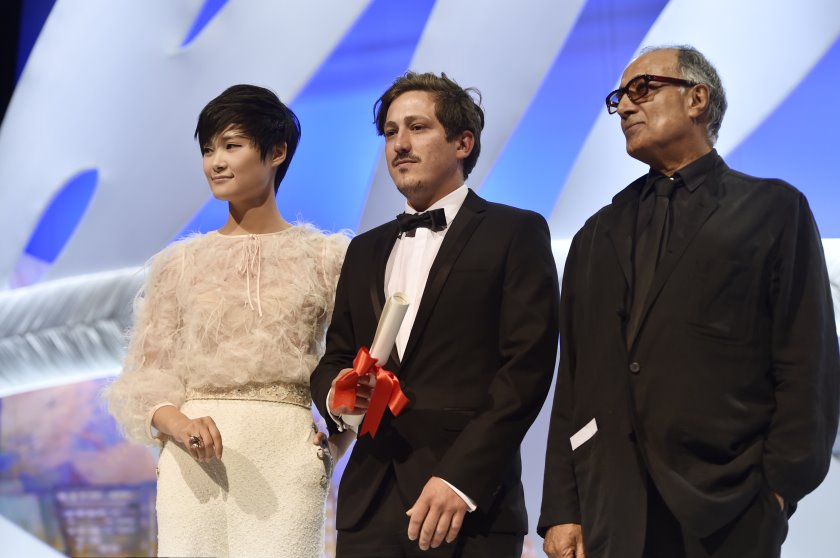 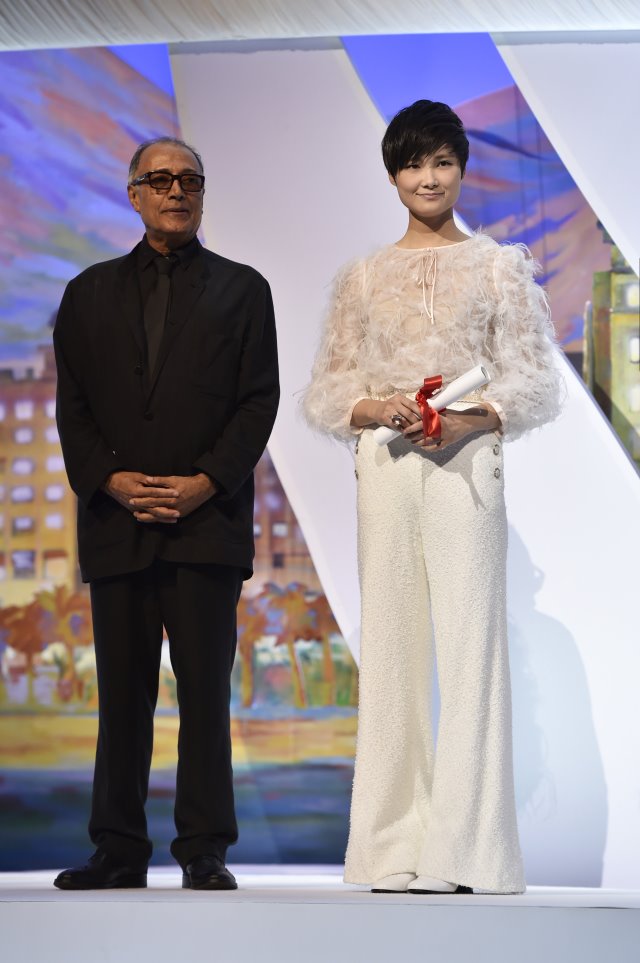 Above Li Yuchun at the closing ceremony to the Festival de Cannes on day 11.

As the Festival de Cannes closes, it’s time to look at the closing ceremony and the best moments.
Below are videos from the last few days of the 67th Cannes Film Festival, with Quentin Tarantino, Uma Thurman, Marie Amachoukeli, Claire Burger, Samuel Theis, Timothy Spall, Andrei Zvyagintsev, Xavier Dolan, and Alice Rohrwacher walking the carpet for the closing ceremony.
Spall is interviewed on his win as best actor for Mr Turner, as is Kristen Stewart, on challenging herself as an actor and working on Clouds of Sils Maria.
Turkish film Kis uykusu (Winter Sleep), directed by Nurl Bilge Ceylan, took the Palme d’Or. It is only the second time a Turkish director has won the award—The Way (1982) was the first.
Rohrwacher’s Le meraviglie (The Wonders) won the Grand Prix, the second prize at the Festival.
Bennett Miller (Foxcatcher) and Julianne Moore (Maps to the Stars) also won awards.
But before the closing ceremony video, we revisit the AmFAR Gala at the Hôtel du Cap-Eden-Roc in greater detail, featuring interviews with Sharon Stone, Justin Bieber, John Travolta, Milla Jovovich, Jessica Chastain and Kylie Minogue.
Stone, one of the chairs of the event, commented, ‘We have a great turnout and we have spectacular people who have been here since the beginning, who have come back again and again, who bring their friends again and again because they know and believe that we are going to get there and these people have all been touched by this.’
Bieber said, ‘I’m just here to have some fun and be around some amazing people and [converse] and be here for a great cause.’ Travolta noted, ‘Tonight is a big night because the word out on the street is that they are getting very close to a cure for AIDS and maybe tonight will make the difference. Wouldn’t that be something?’
Jovovich said, ‘It is a super fun night and we have to mix business and pleasure but the fact is we have raised over $120 million since the inception of AmFAR. I know quite a few people that I love dearly that wouldn’t be alive today without the efforts that AmFAR has made to really find the cure for HIV–Aids and every year that we come here and raise money is another huge step forward so I am just so proud.’
Chastain told of her motives of being there: ‘For me, the most important thing is that we raise money so we are going to entertain the people with deep pockets and get them to bid, drink some champagne, share and we will get people to open their wallets. I’m all for it.’
Finally, from Minogue: ‘It is such an important event and the turnout is amazing. There is a lot of fabulosity for a very important cause so I like to be able to be here.’
The L’Oréal Paris ambassadors—Eva Longoria, Jane Fonda, Lara Stone, Barbara Palvin, Julianne Moore, Blake Lively, Laetitia Casta, Aishwarya Rai, Araya A. Hargate, Gong Li, Freida Pinto, Isabeli Fontana, Natasha Poly, Grazi Massaferi, Taís Araújo, Zoe Saldana, Bianca Balti, Inès de la Fressange, Leïla Bekhti, Li Yuchun and others—appear in a summary video, showing the beauty trends, the Makeup Genius app (where you can apply make-up virtually to see what it would look like on your face), and the best of their red-carpet appearances.
Our final video shows off the best fashion from the event. Instead of jumping the gun with our summary after the first five days, as some other media did, we’ve waited till the end to bring you a more comprehensive video. Elie Saab, Chanel (as worn by Carole Bouquet on the jury), Christian Dior (worn by Marion Cotillard, the brand’s muse), Versace (for Jessica Chastain, Hilary Swank and Uma Thurman) and Louis Vuitton by Nicolas Ghesquière were the major labels that lit up the red carpet.
Among the best dressed: there was Nicole Kidman on day one in Armani Privé; Cate Blanchett in Givenchy; Blake Lively in her black-and-white Gucci, Léa Seydoux in a custom Prada, and Sharon Stone in Pucci.

A Fistful of Dollars closing ceremony

Inside Cannes with L’Oréal Paris