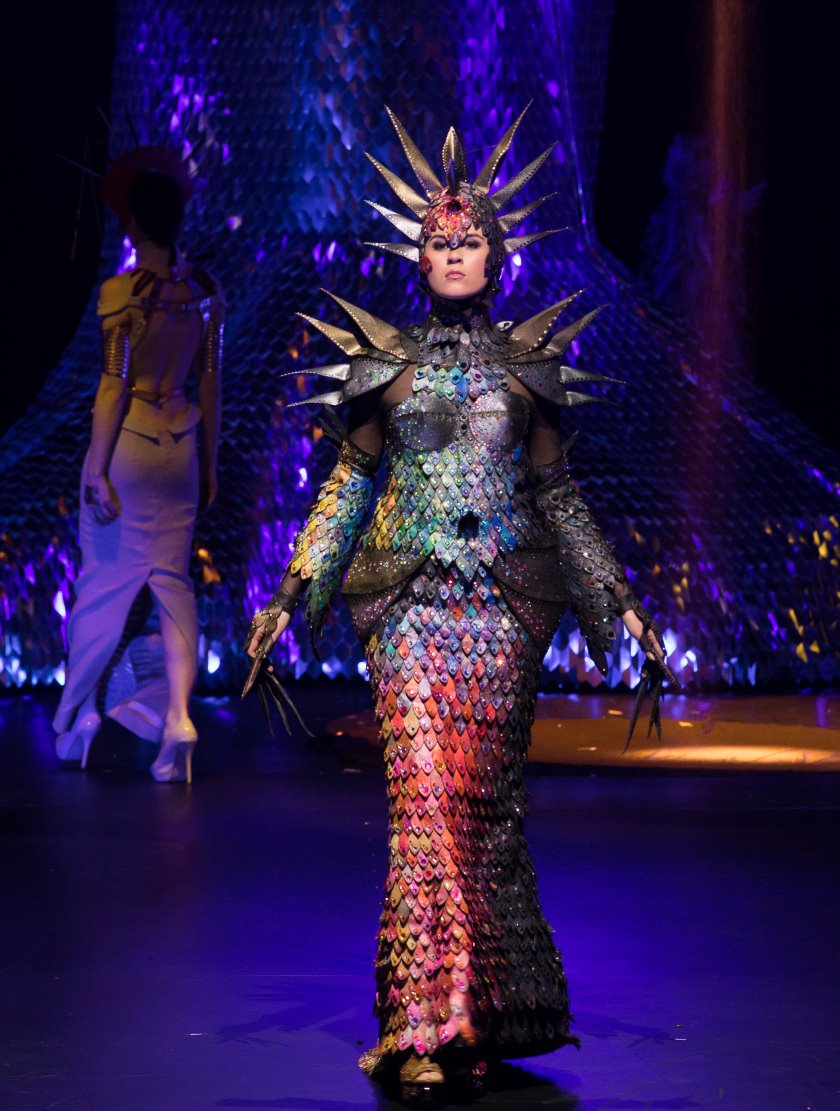 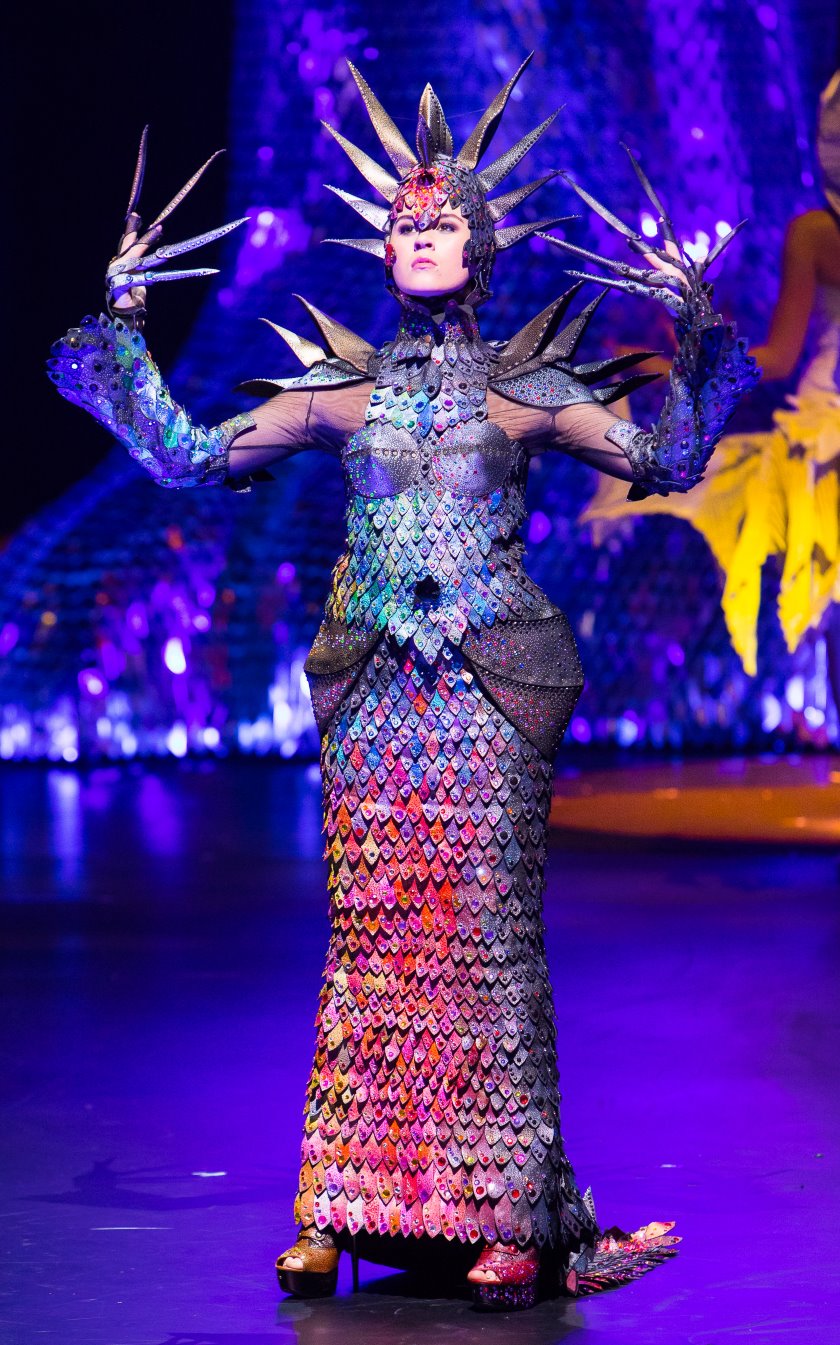 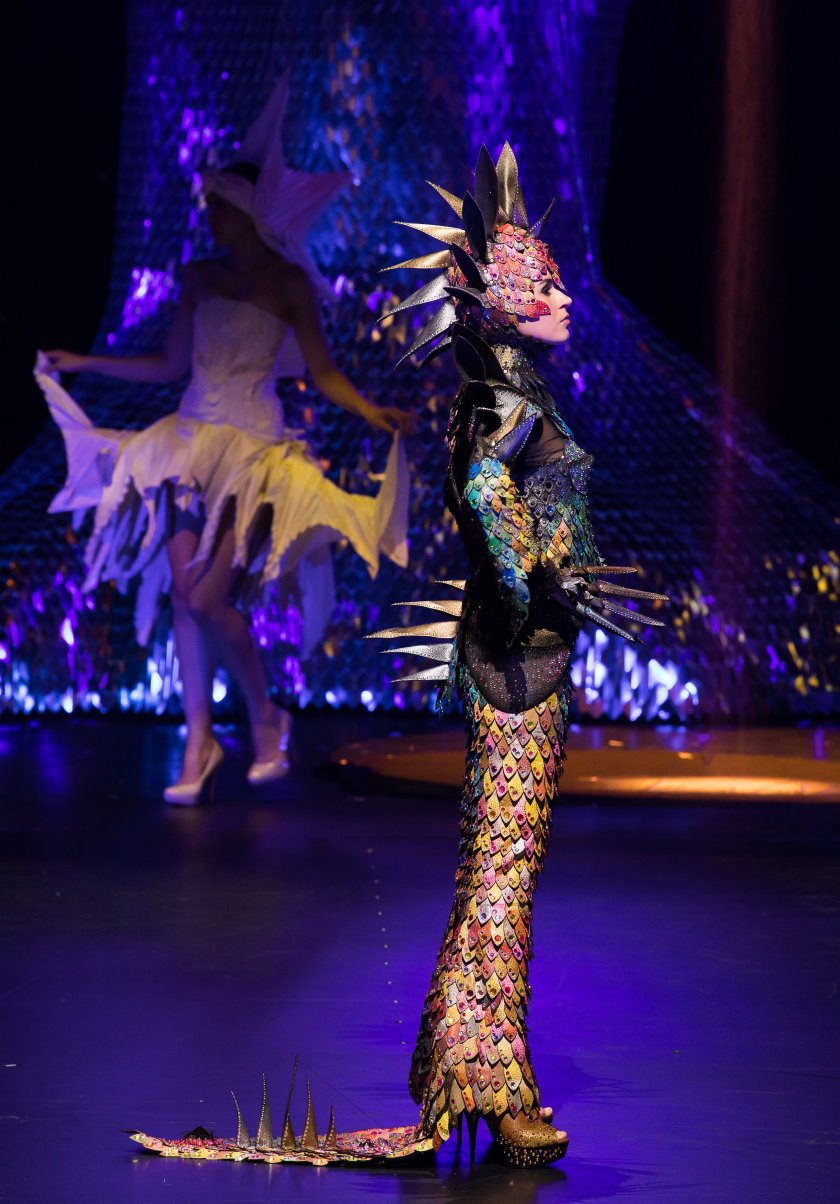 New Zealand designer Gillian Saunders has scooped the Brancott Estate Supreme Award at tonight’s World of Wearable Art (WOW) Awards’ Show. Saunders, who had entered 15 garments before her winning entry, Supernova, has won eight awards prior to 2016, but this is the first time she has taken out the top prize.
Saunders, who was born in England, has been involved in television and theatre for most of her working life. She was trained in Yorkshire, and went on to Christchurch, New Zealand, where she worked as a props’ maker for the Court Theatre.
‘I had been making stage props for theatre and TV for years. WOW was the perfect challenge—could I make props for the body as well?’ she said.
Supernova was inspired by ‘Thierry Mugler’s Chimera dress [from the autumn–winter 1997–8 collection], … the iridescent spiny fins of the Hippocampus from the Percy Jackson movie The Sea of Monsters, and some incredible NASA images taken by the Hubble Telescope,’ she noted. ‘Once all these elements were combined, Supernova was brought to life.
‘The large gems represent new stars being born and the dark shadows represent deep space. Each scale has been individually cut, shaded with marker pens and then hand-sewn on to the garment. Each gem has had its sticky backing removed and then glued on by hand.’
Saunders also won the Avant-Garde section in this year’s competition, judged by WOW founder Dame Suzie Moncrieff, Zambesi’s Elisabeth Findlay, and sculptor Gregor Kregar.
Dame Suzie said, ‘Supernova has the design innovation, the construction quality and vibrant stage presence in performance to win WOW’s top award.’
Saunders’ 2013 design, Inkling, won the Weta Creature Carnival Award and an internship for her at Academy Award-winning Weta Workshop. It is currently part of the WOW international exhibition, touring around the world, and presently at the EMP Museum in Seattle, Washington, where it will be displayed till January, after which the exhibition will head to the Peabody Essex Museum in Boston, Mass.
She also won the Avant-Garde section in 2007 with Equus: behind Closed Doors, while in 2009, Tikini was second in the Air New Zealand South Pacific section.
Designers from New Zealand, China, India, England, Australia, and the USA won awards in each section.
The American Express Open section this year saw Renascence, by Yuru Ma and Siyu Fang of Shanghai take first place. The Spyglass Creative Excellence section was won by Mai (I), by Pritam Singh and Vishnu Ramesh of Gujarat. Queen Angel, by Adam McAlavey of London, won the MJF Lighting Performance Art section.
Baroque Star, by Natasha English and Tatyanna Meharry of Christchurch, won the Weta Workshop Costume and Film section, netting the duo a four-week internship at Weta Workshop, plus travel, accommodation, and prize money.
The Wellington Airport Aotearoa section was won by Maria Tsopanaki and Dimitry Mavinis of London, with their creation Princess Niwareka. The World of Wearable Art and Classic Cars Museum Bizarre Bra section was won by Julian Hartzog of Tarpon Springs, Fla., with Come Fly with Me.
Of the special awards, Dame Suzie chose Incognita, by Ian Bernhard of Auckland, as the most innovative garment, giving it the WOW Factor Award. Renewal, by Alexa Cach, Miodrag Guberinic and Corey Gomes, won the First-Time Entrant Award. The Knight by Jiawen Gan of the Beijing Institute of Fashion Technology won the Student Innovation Award. The Sustainability Award, recognizing the protection of our environment and the use of materials that would otherwise be discarded, was won by Bernise Milliken of Auckland, for Grandeer. Digital Stealth Gods, by Dylan Mulder of Wellington, won the Wearable Technology Award. The Wellington International Award, given to the best international entry, was won by Daisy May Collingridge of Woldingham, Surrey, England, for Lippydeema. Collingridge also won the UK–Europe Design Award with this entry.
Khepri, by Miodrag Guberinic and Alexa Cach of New York, NY, won the Americas Design Award. Yu Tan of Shanghai won the Asia Design Award with The Renaissance Happens Again, while Cascade, by Victoria Edgar of Geelong, Victoria, won the Australia and South Pacific Design Award.
The David Jones New Zealand Design Award was won by Voyage to Revolution, by Carolyn Gibson of Auckland.
The Cirque du Soleil Performance Art Costume Award, chosen by Denise Tétreault, Costumes Lifecycle and Creative Spaces Director of the Cirque du Soleil, was won by Digital Stealth Gods, by Dylan Mulder. Mulder receives prize money, flights and accommodation for a one-month internship at Cirque du Soleil’s headquarters in Montréal, Québec.
WOW runs in Wellington, New Zealand, through to October 9, and will be seen by 58,000 people live during its run. It employs over 350 cast and crew.
This year, 133 entries by 163 designers (some worked in pairs) were received, competing for a prize pool of NZ$165,000. 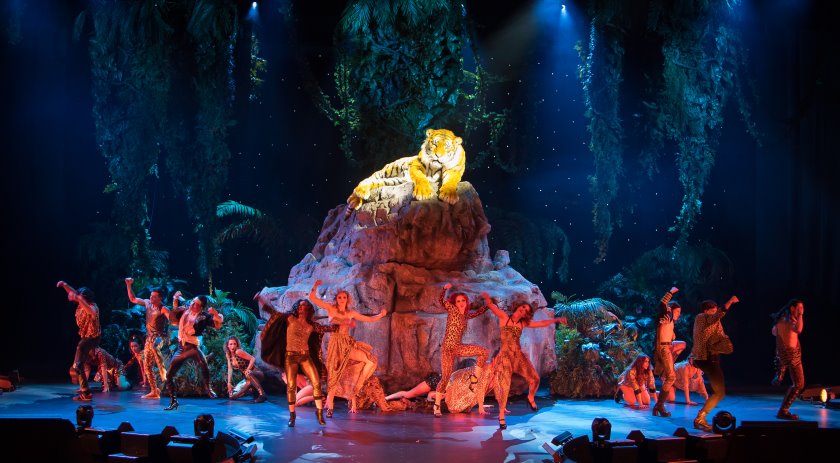 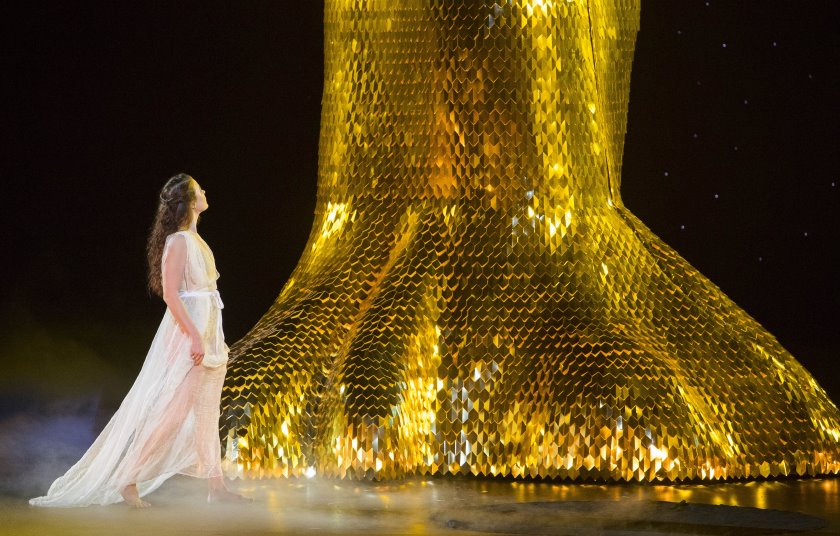 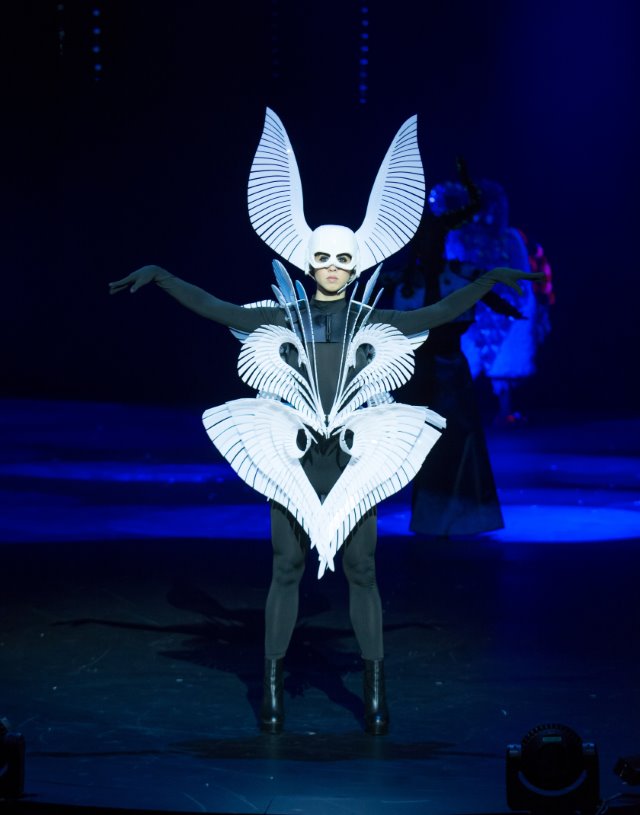 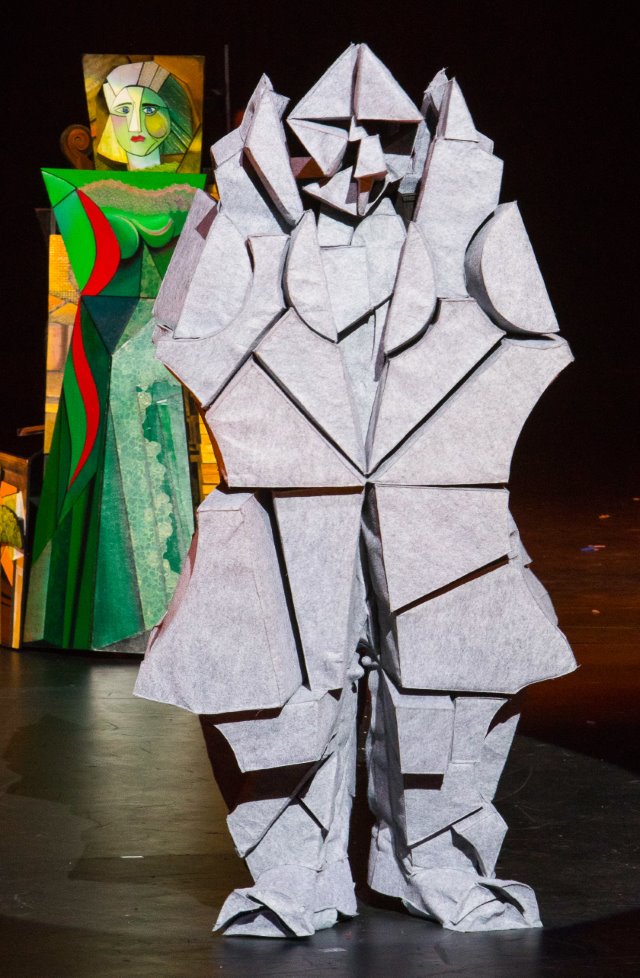 Mai (I), by Pritam Singh and Vishnu Ramesh, Gujarat. 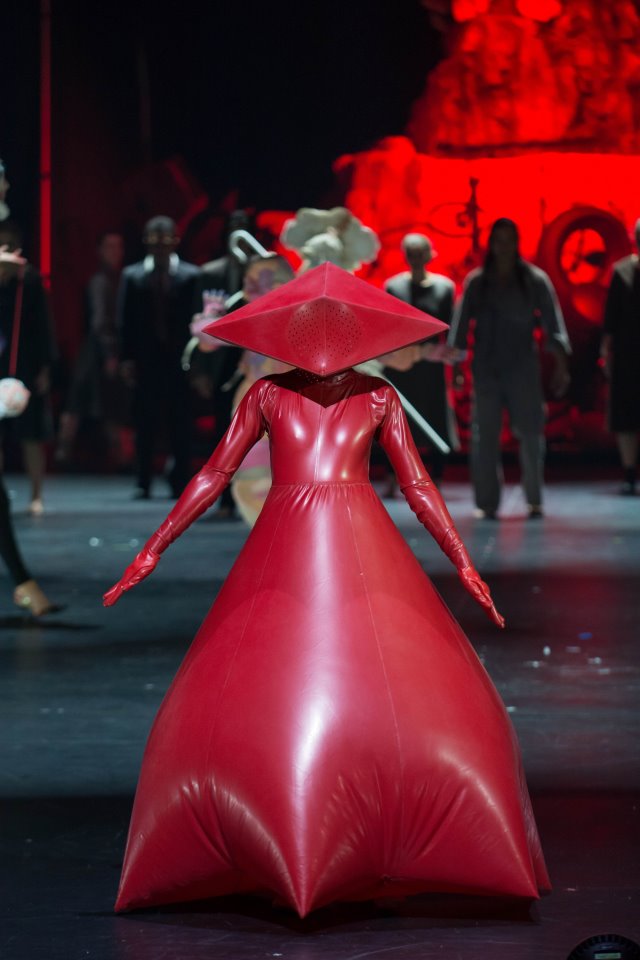 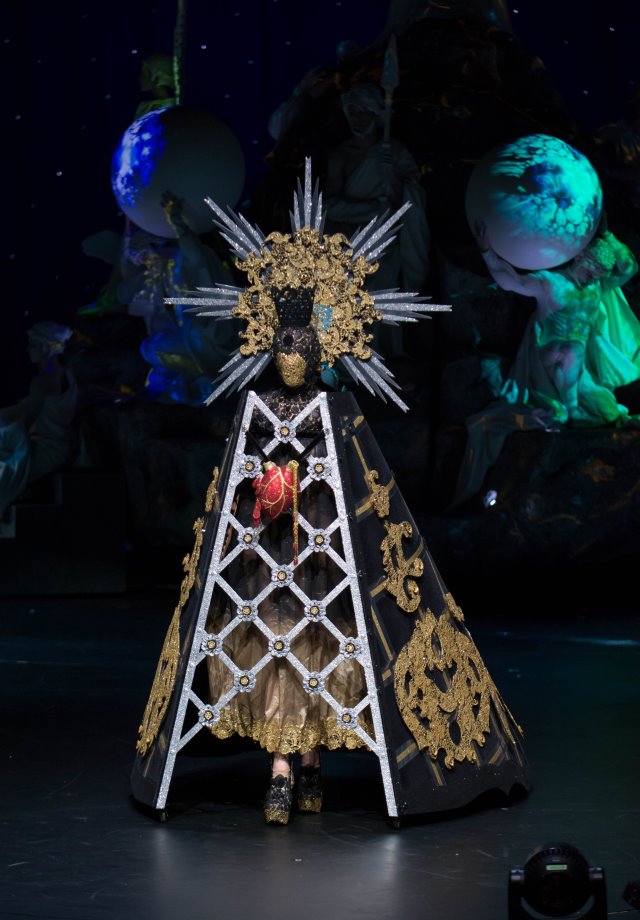 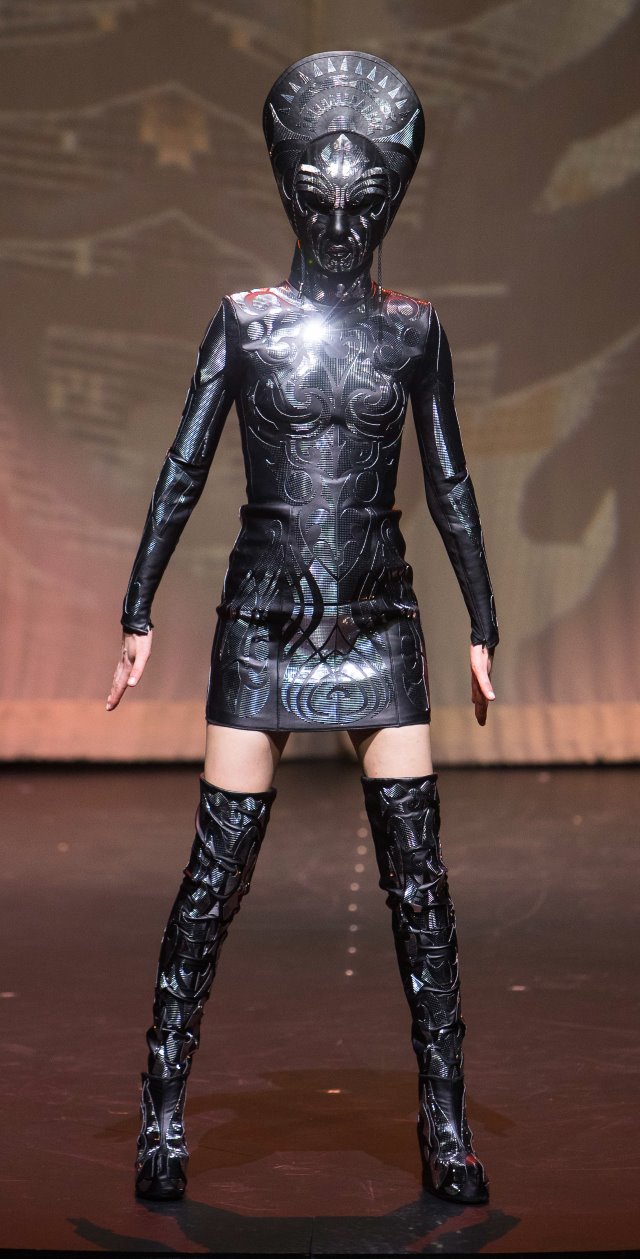 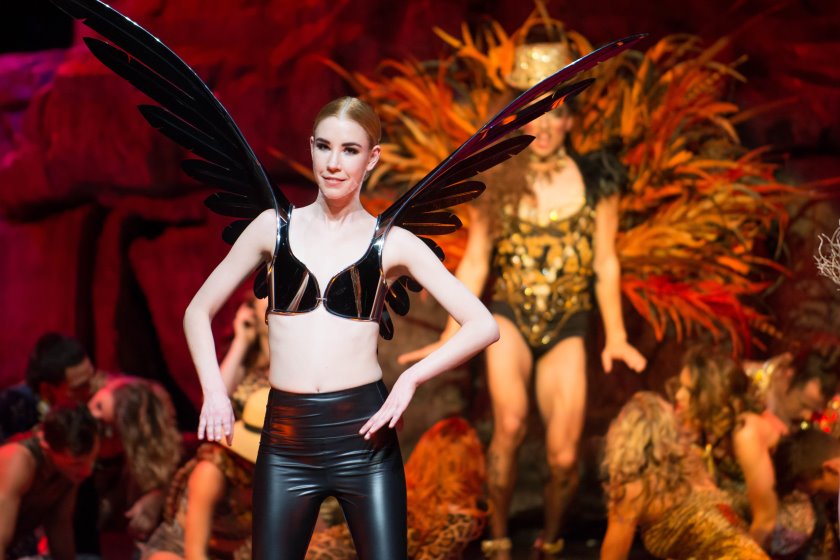 Come Fly with Me, by Julian Hartzog, Tarpon Springs, Fla. 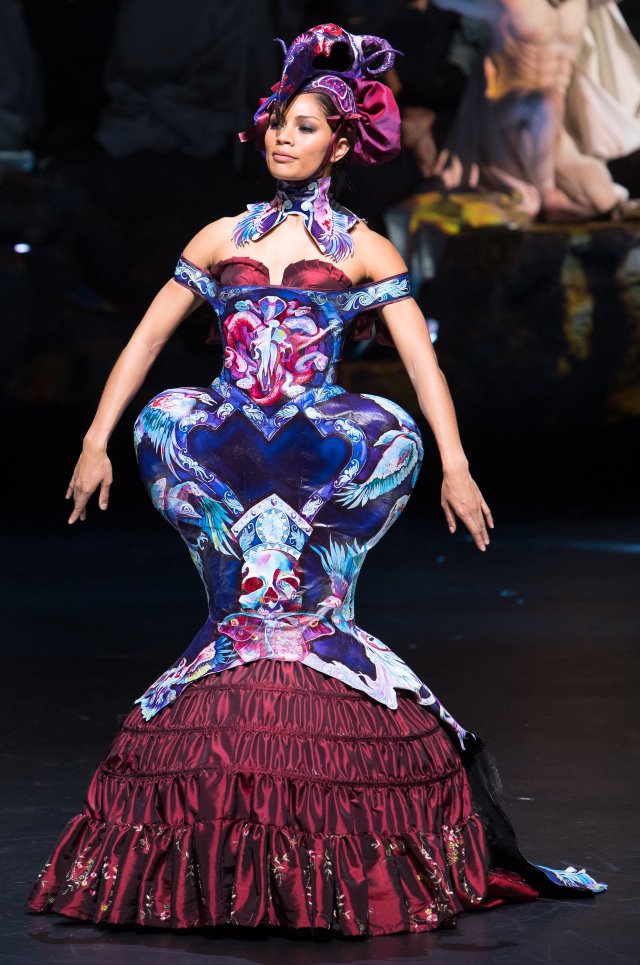 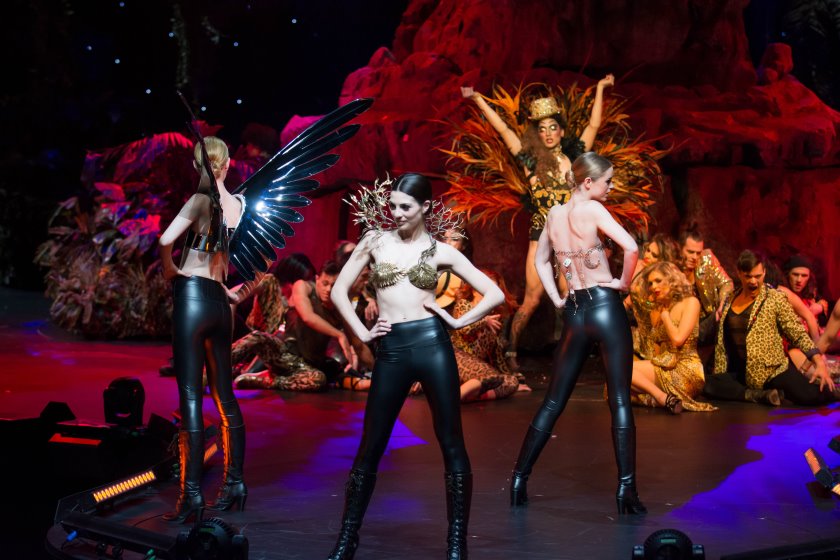 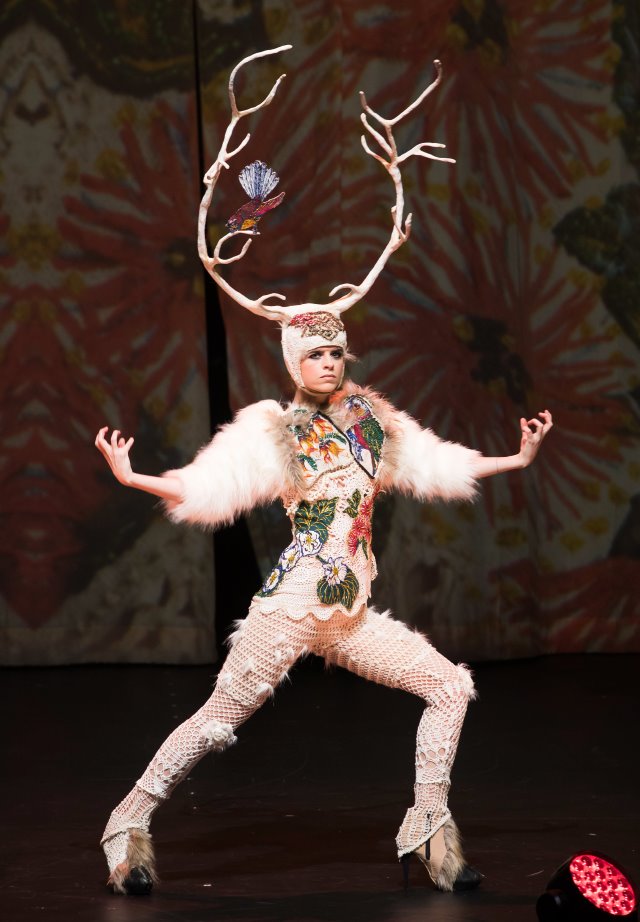 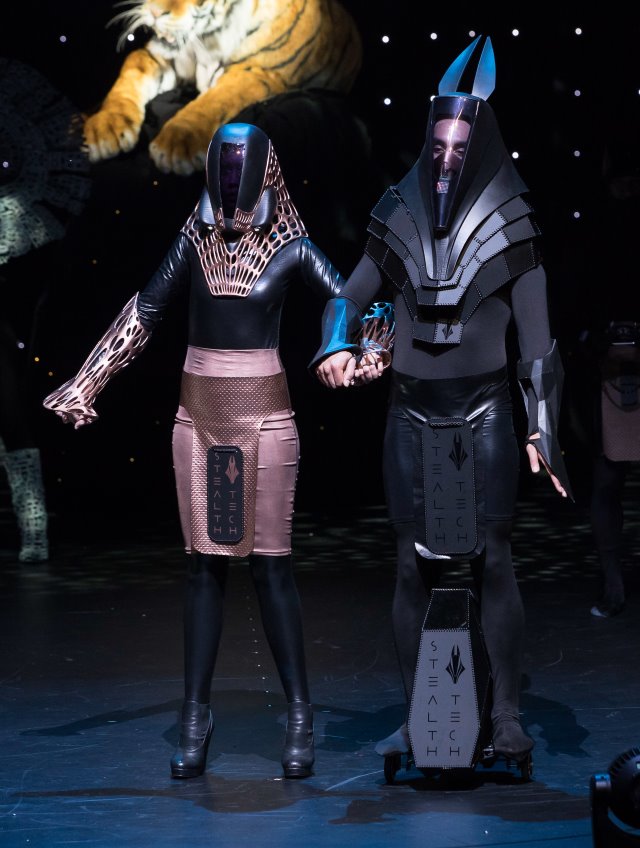 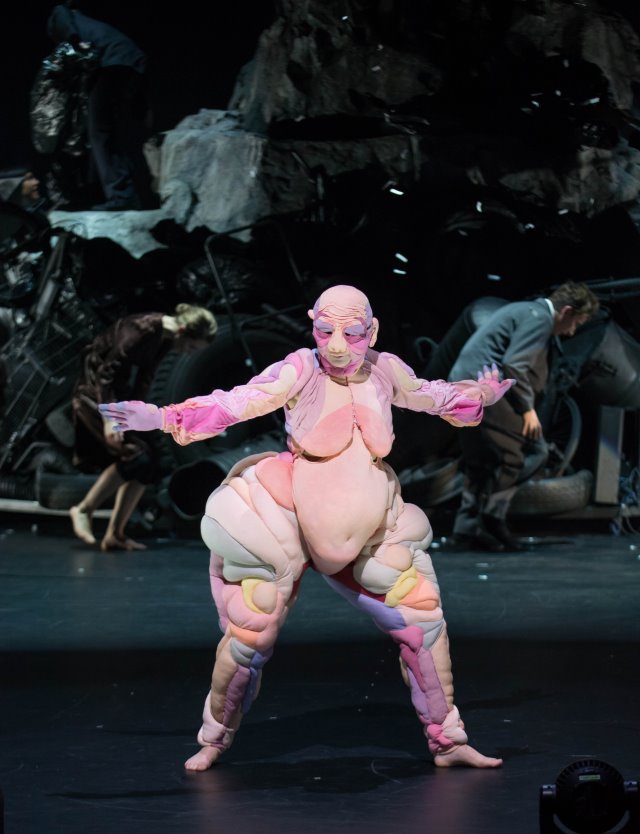 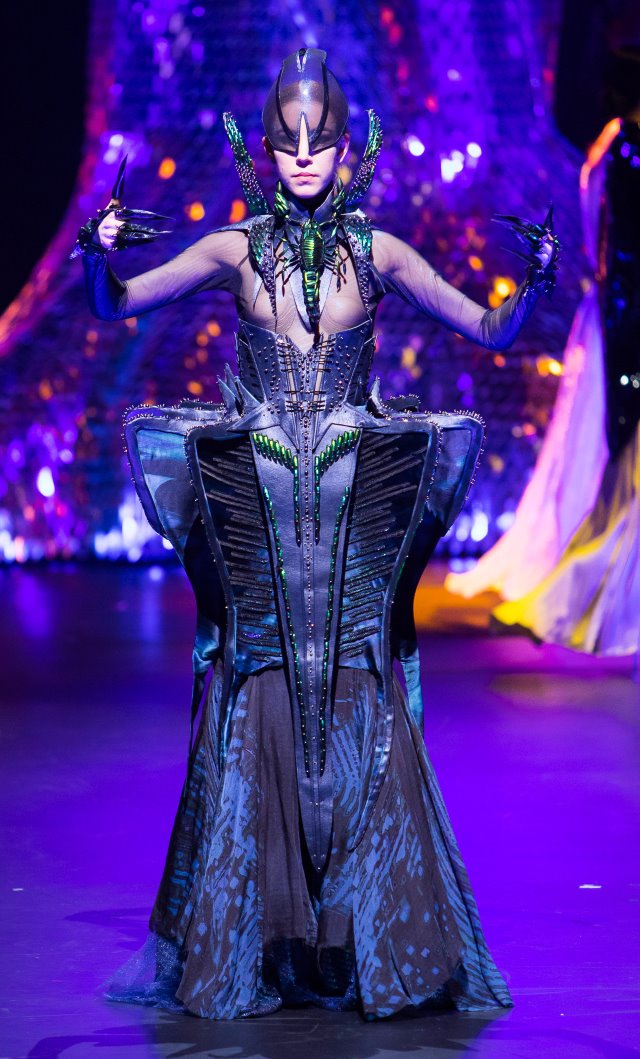 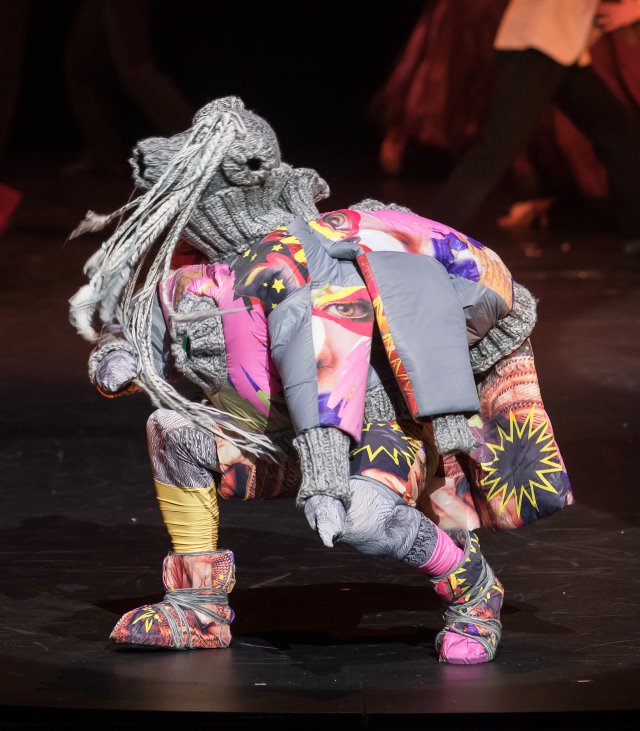 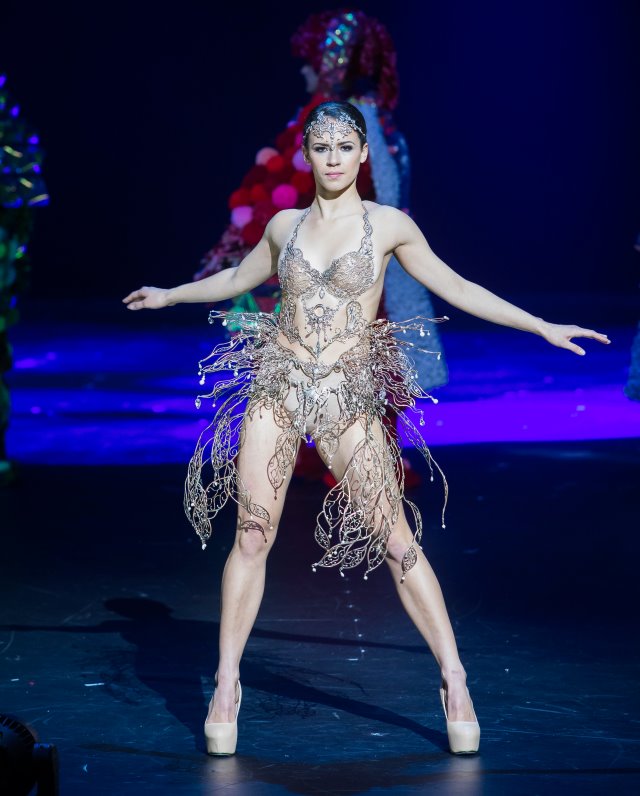 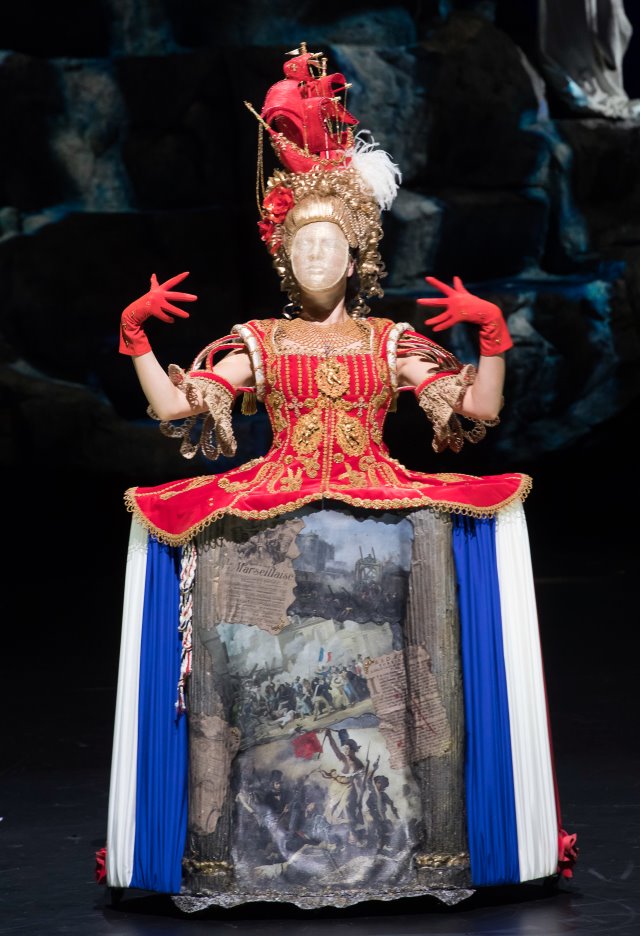