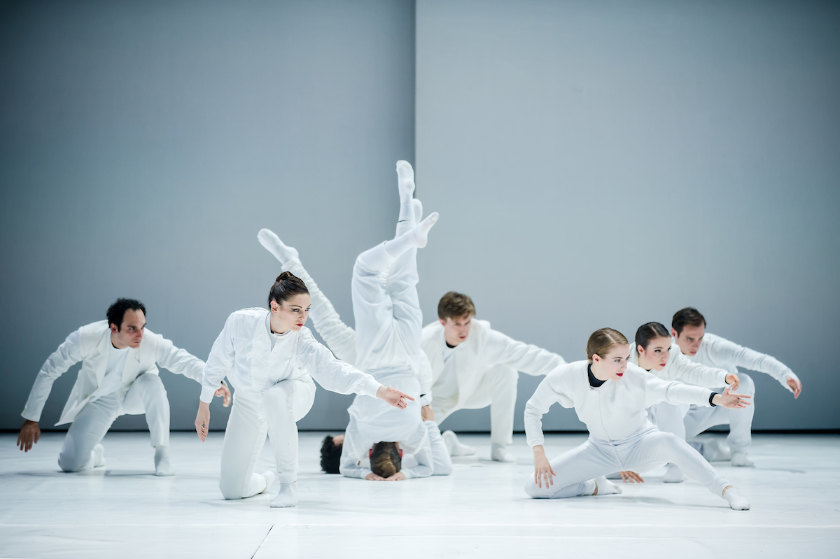 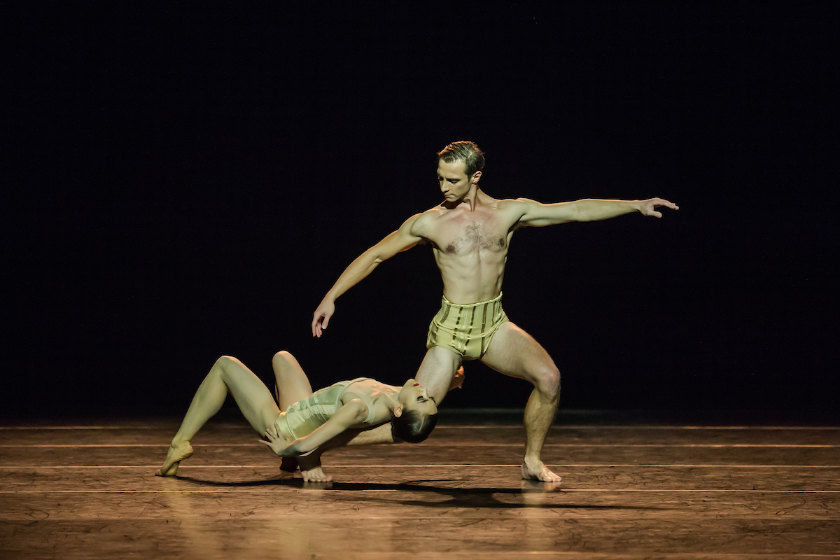 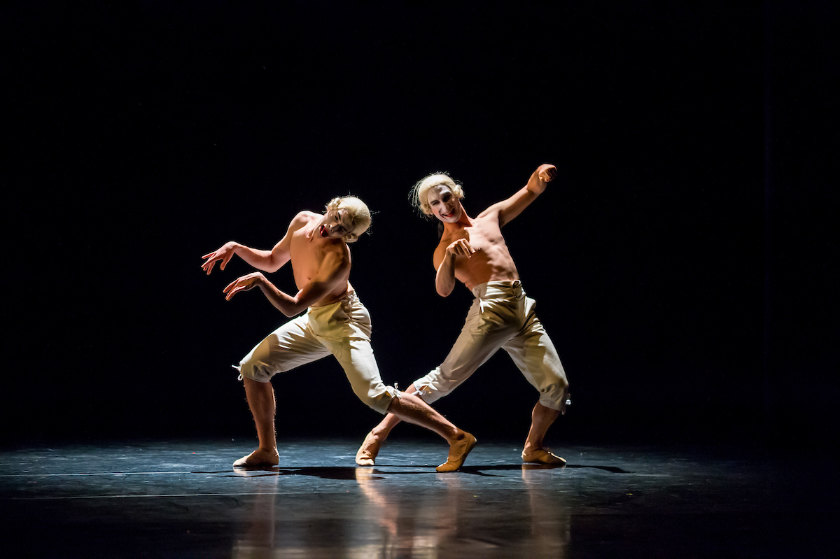 Top: Dancers representing the Antarctic near the beginning of The Last Dance. Centre: Katherine Minor and Fabio Lo Guidice in Petite Mort. Above: Tristan Gross and Massimo Margaria in Sechs Tänze.

The Royal New Zealand Ballet’s Dancing with Mozart had its première in a different location: at the State Opera House, rather than its usual home of St James Theatre, which is undergoing repair. This mixed bill, with Wolfgang Amadeus Mozart’s music the unifying theme, had one classic ballet by George Balanchine, but it was the modern ballets, especially the world première of Corey Baker’s The Last Dance, where the company truly excelled.
Named for Mozart’s Divertimento No. 15 in B flat major, K. 287, Balanchine’s Divertimento No. 15, staged by répétiteuse Francia Russell, who had travelled to New Zealand to work with the RNZB’s dancers, was set against a bright blue background with chandeliers above. The mixture of dancers showed how much the company’s ensemble had changed recently; it served to highlight the poise and control of Mayu Tanigaito (who must deserve a lead again), while Alexandre Ferreira’s skill in the first ballet has come even further than when we saw him last in The Piano: the Ballet.
This was the only number with live music performed by Orchestra Wellington, conducted by Marc Tadei, as the remainder used recorded scores to excellent effect.
The Last Dance, which wound up being the most talked-about of the four ballets, was performed second, to a score inspired by Requiem in D minor, K. 626. There’s a very clear message about climate change here from Baker, whose ballet can claim to be the first created in Antarctica.
Baker says he has held a fascination with the icy continent since he was a boy, visiting the Antarctic Centre in Christchurch regularly.
Originally, he and RNZB dancer Madeline Graham travelled to Antarctica to create The First Dance, showing off the continent’s beauty and the threats it faces. The film can be found at the end of this article. In the time it takes to watch it, 860,000 tonnes of Antarctic ice will have melted.
Baker realized, ‘in creating The First Dance, I was also potentially creating the last dance in Antarctica. It is this unfortunate realization that underpins my new work’.
The ballet begins with eight dancers in white, stage right, in harmony, while Tanigaito—changed into black since her appearance in Divertimento No. 15—and Joseph Skelton appear inside a giant box, briefly displaying the words The World on the front. The dancers in white begin taking note of the movements of Skelton and Tanigaito, which gradually have an effect on the eight. Those negative effects themselves impact on the two, representing humankind and our current behaviour, driving climate change. Tanigaito and Skelton have to perform in conditions that we’ve never seen other RNZB dancers go through, not least the projected static.
We don’t wish to spoil the ballet, as the message is very poignant and brilliantly performed. Being in a southern hemisphere country, with at-risk Kiribati one of our nearby Pacific neighbours, the threat of rising sea levels is all too real.
The Mozart score is performed in increasingly deconstructed fashion, the digital manipulations created by composer Duncan Grimley.
Here is a ballet where everything aligns: the expertise of the dancers, whose passion for the subject is very evident; the creative and up-to-the-minute choreography; a very ingenious score; and a topic that touches on the Zeitgeist. We can’t speak more highly of The Last Dance and have to call it the pièce de résistance of the evening.
The final set of ballets, Jiří Kylián’s Petite Mort and Sechs Tänze, go together. The former (set to Piano Concerto in A major, K. 488 and Piano Concerto in C major, K. 467) is a ballet describing the ecstasy of sexual intercourse, and the symbolism is evident: male dancers with fencing foils, female dancers hiding behind their armour, what appears first to be gowns but, in fact, are sculpted crinolines. Satin sheets came across the stage to signify scene changes. The audience enjoyed the humorous effect of the wheeled garments, but for us, it’s the pas de deux that are the most enjoyable. Here, RNZB dancers are given a chance to show their control and energy, and, dare we say it, sensuality and eroticism, as one might expect from the title.
Sechs Tänze was the humorous take on Mozart (using Deutsche Tänze K. 571), with male dancers donning 18th-century-style wigs (think of the movie Amadeus) and acting mischievously, and females dress like rag dolls. The crinolines and foils from the previous ballet make unexpected appearances (even if five years separate their respective creations), a dancer on the shoulders of another make for an extra-tall character who beheads his on-stage companion, and the ballet finishes with bubbles masquerading as snow. This was all witty and plotless, but undeniably enjoyable; helped by the fact that Kylián has classical techniques interwoven into the ballet (some powerful entrechats, for instance) ensures that even traditionalists will depart with a smile.
After Wellington, Dancing with Mozart heads to Christchurch, Invercargill, Dunedin, Blenheim, Palmerston North, Napier and Auckland, finishing on July 8. Full details are at the RNZB’s website.—Jack Yan, Publisher 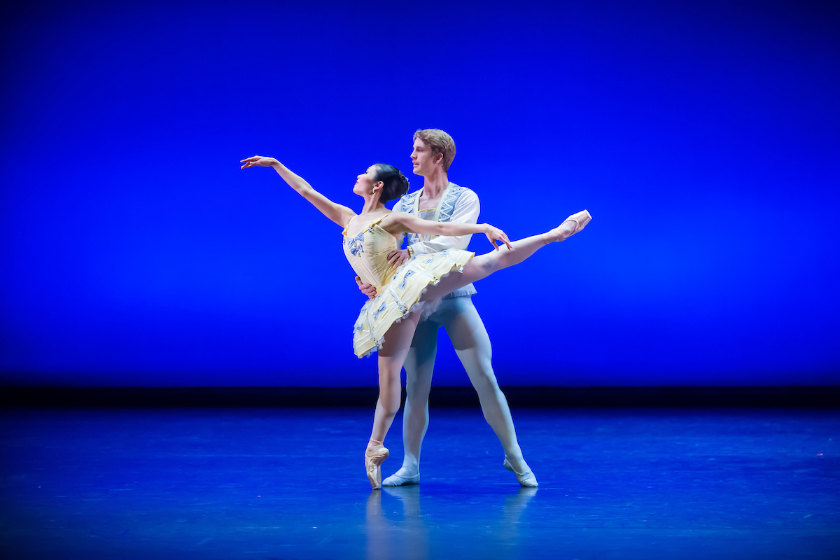 Above: Mayu Tanigaito and Joseph Skelton in Divertimento No. 15.