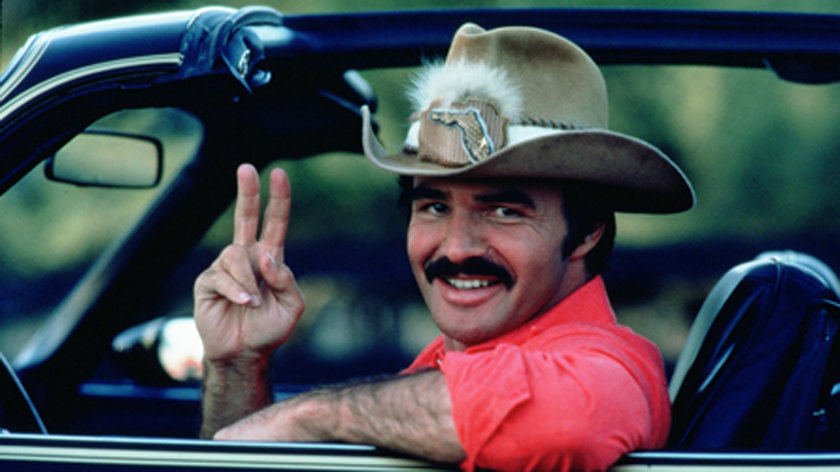 Of course I had a picture of Burt Reynolds on file, used in my Tweet about his passing

There’s only one film series from 1977 that I followed, where the first was amazing, and the second not as good even though they bumped up the action. When they made the second lot of three, I was pretty disappointed, as they didn’t have the magic of the original. I am, of course, talking about Smokey and the Bandit. What else could there possibly be?
As a child, Burt Reynolds, not Harrison Ford, was the man. I cared little for Star Wars and the force; the only force I wanted to know about was horsepower, and by the looks of it, a black Pontiac Trans Am had lots of it.
In those young days, science fiction, especially space-set fiction, didn’t appeal to me: I found the blackness and bleakness of space unsettling. With my sights on a world more like my own, on terra firma, Smokey and the Bandit represented escapism at its finest.
My cousin Victor, 19 months my senior, and I helped make Burt Reynolds rich. We went to plenty of his movies: Smokey and the Bandit Part II (the first movie in which I saw and heard the word shit), The Cannonball Run, and Cannonball Run II among them. I saw him show up in Silent Movie. When a little older, I caught Burt on television in The Best Little Whorehouse in Texas (memorable for the song ‘I Will Always Love You’). Dan August, with a clean-shaven Burt, was syndicated. Then there were those great car-chase scenes in The Longest Yard where a Citroën SM is written off, heist movie Rough Cut (with Lesley-Ann Down, who surely deserves pages in any tome recalling 1970s actresses), and Hooper.
We didn’t see much of Burt after that. There was his much publicized marriage to Loni Anderson and his sitcom Evening Shade, and, of course, his Oscar-nominated role in Boogie Nights, but none of that was classic Burt in the way the Bandit was when we were kids.
As far as the 1970s were concerned, Burt Reynolds’ fictional characters showed us what machismo was but with a dose of humour. We heard that Burt did his own stunts (never mind that many weren’t him: when your age is in the single digits, the Hollywood machine has a greater hold on your knowledge.) When Hal Needham began showing outtakes as the end credits rolled—Jackie Chan says he took this inspiration for his own films—we learned that the Bandit’s (or J. J. McClure’s) laugh was also Burt’s, and why not live the life of a movie star if you’re allowed to goof with your mates, like Dom DeLuise?
Some of these movies have dated terribly: Smokey and the Bandit Part II was achingly bad to rewatch recently, and the idea of kidnapping Farrah Fawcett in The Cannonball Run just wasn’t funny.
As news broke today that Burt had died of cardiac arrest in Florida aged 82, it was, to those of us perhaps most impressionable to his characters, the passing of an era. Burt showed us how to have a good time while ‘showing off’. Every middle-aged person will bemoan this in every generation, and it is my turn: our screen heroes—those played by Lewis Collins or Roger Moore—are vanishing one by one.—Jack Yan, Publisher