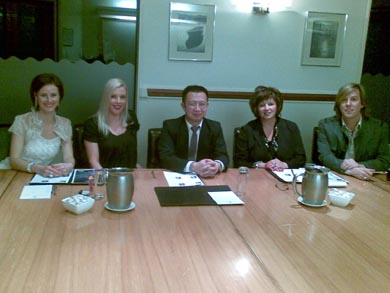 If you caught my last post, you’ll know that I wasn’t with our Miss Universe New Zealand 2010 contestants until the evening. I awaited the arrival of Evana Patterson, with whom I judged last year’s pageant in Levin. After collecting her from Wellington Airport, we went to the Museum Hotel for the swimwear show and the tough interview sessions.
Tonight I met Dina Janse van Rensburg, who had judged the 2006 pageant (a year before I became involved here) and Carl Manderson, director of Salute Hair & Day Spa, and caught up with Samantha Hannah, who is more than familiar to Lucire readers.
After a live cross for TV One’s Close-up—where Mark Sainsbury asked Miss Auckland, Caren Freeman, and Miss Hutt Valley, Mary Cooper, the pronunciation of ‘the Icelandic volcano’ (a word which, I might add, tripped up most professional talking heads)—we had the swimwear segment and the interviews.
The slates were wiped clean tonight. Anyone who could have slipped up earlier in the week need not worry. We all started our scoring on zero.
The Museum Hotel allowed us to use a fourth-ﬂoor boardroom for the interviews, so there was a distinct Apprentice feel to proceedings, though the questions went in Pop Idol style, from left to right. Yours truly, chairing the panel, had the Donald Trump (or Lord Sugar) role this year, and we ﬁnished our interviews at a respectable time of 10.20 p.m.
Each contestant was ushered in by the reigning Miss Universe New Zealand, Katie Taylor, who essentially chaperoned this year’s entrants. Somewhere among them is her successor.
Our 13 contestants did marvellously with marked improvements in answer quality on earlier years. Beyond that general observation, I can’t comment.
The big day is tomorrow. I have picked my two winners for the free tickets and they have been notiﬁed. Judging from the comments, I see at least one of you agreed that LaQuisha Redfern’s response was an excellent one, so I hope to see her there tomorrow night at the Duxton.
Groove 107·7 FM’s draw runs for a bit of Saturday morning till midday, so stay tuned there. I am dropping tickets off at the Breeze and ZM in the morning for a giveaway. I am told there will be door sales, though we are nearly at capacity once we count the prize winners. I hope to Tweet the winner’s name when announced on stage.

P.PS.: Snap Star has a great bunch of photographs of our outing to Mishmosh on Thursday night here.—JY

P.P.PS.: Sorry, no giveaways at the Breeze or ZM, since neither station is open. Looks like they don’t broadcast out of Wellington or have staff there during weekends.—JY