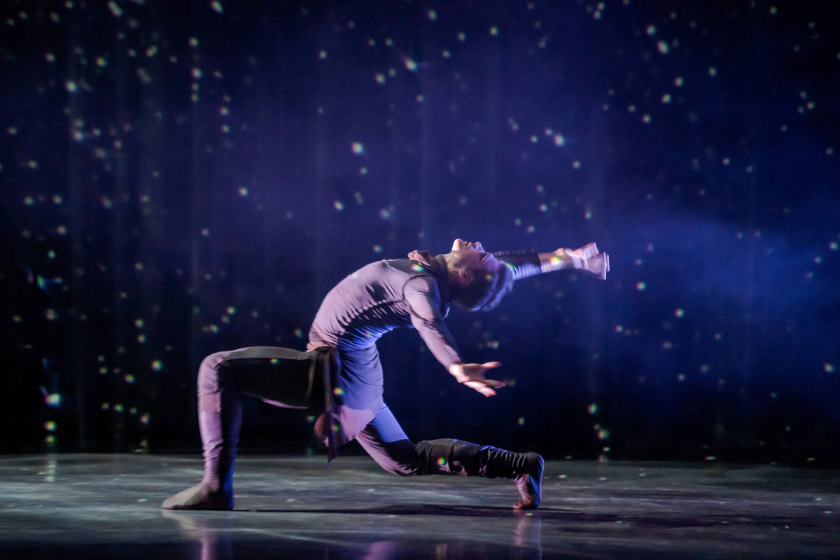 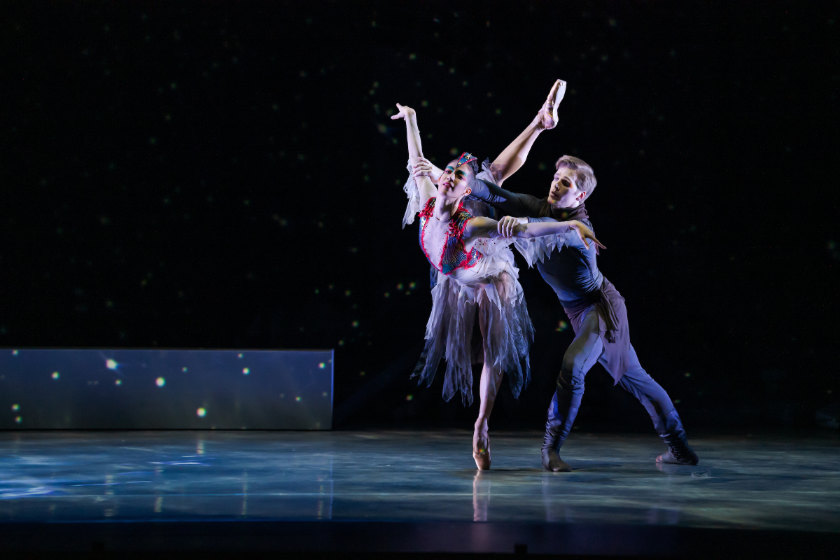 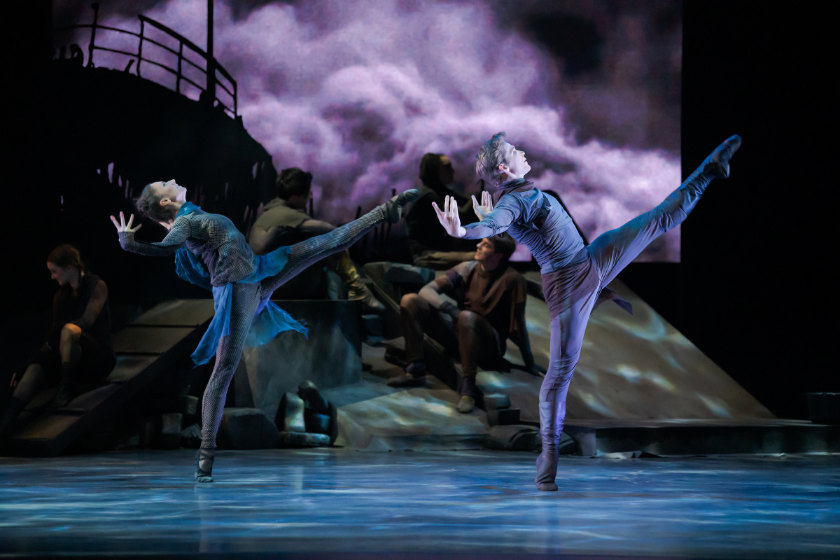 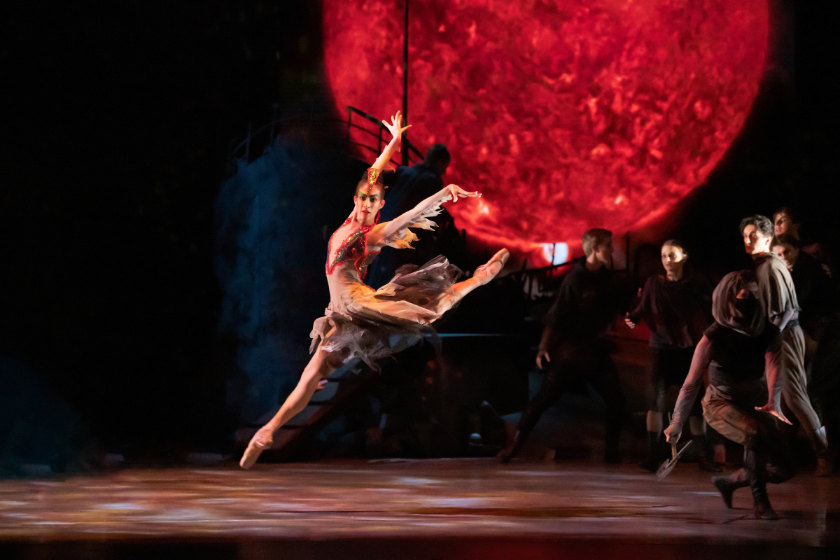 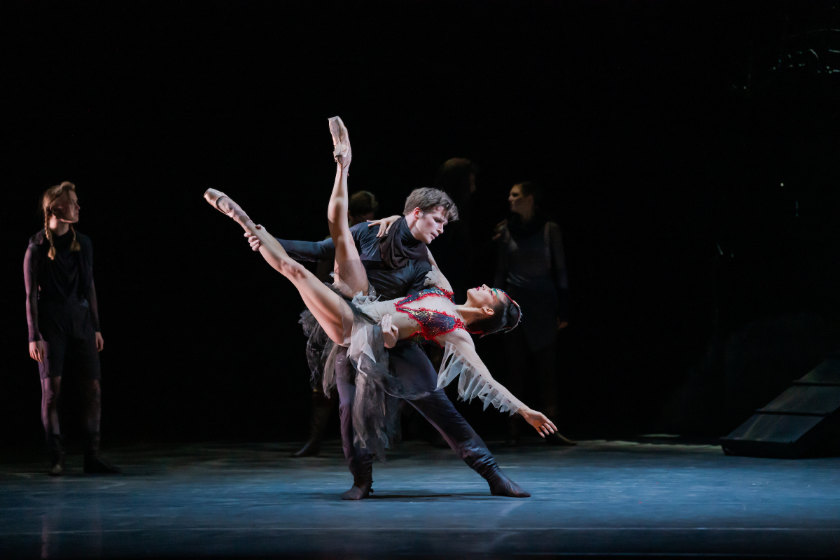 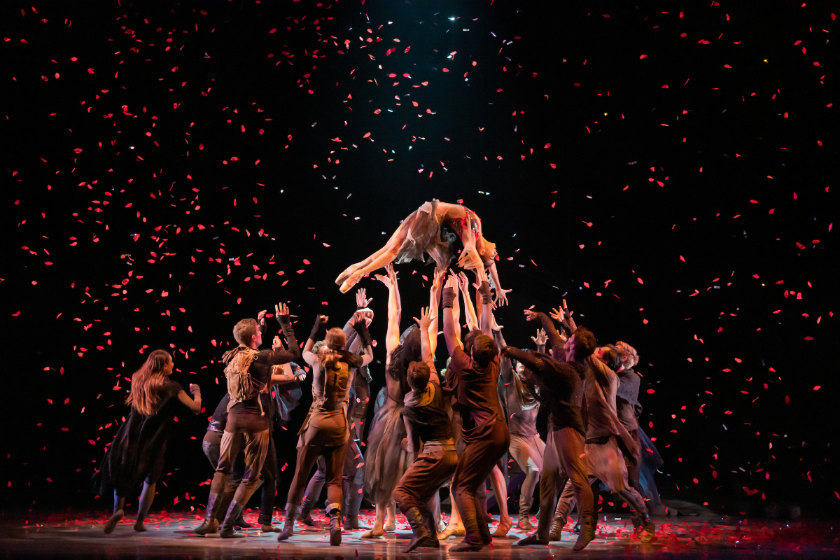 Loughlan Prior’s The Firebird is a triumph for the Royal New Zealand Ballet, one that raises Prior’s own high standards, perfectly suited to the strengths of the company and its regular collaborators.
Its première at the Opera House in Wellington last night was paired with the classic Paquita, which opened the show. Each ballet is roughly an hour long, with a 20-minute interval in between.
With the hour’s run time, this is the version of Paquita that’s more regularly seen today, comprising a single act, and letting the dancers shine. It has been staged by Michael Auer and RNZB artistic director Patricia Barker, with Laura McQueen Schultz as ballet master. The costumes by Donna Jeffris and Barker are sumptuous and in the Russian tradition, with a bright set designed by Howard C. Jones and lit by Jon Buswell. Because it has been reduced to the final act, the traditional narrative is gone, but it remains a ballet that demonstrates the skills of the dancers, and there is plenty of energy, thanks to Marcus Petipa’s choreography keeping audiences enthralled.
Mayu Tanigaito, in the pas de trois on opening night, is one of the RNZB’s greatest assets today as her performance and skill continue to rise, while we also have to note Kirby Selchow’s solo, showing her control and strength. But it was over to Kate Kadow and Laurynas Véjalis to do the most complex moves in the ballet: Kadow spent large parts of the grand pas de deux en pointe, and she executed an impressive series of pirouettes as part of the grand pas variations in the finalé. Véjalis, meanwhile, is a powerful, graceful dancer whose made some impressive and technically difficult leaps. 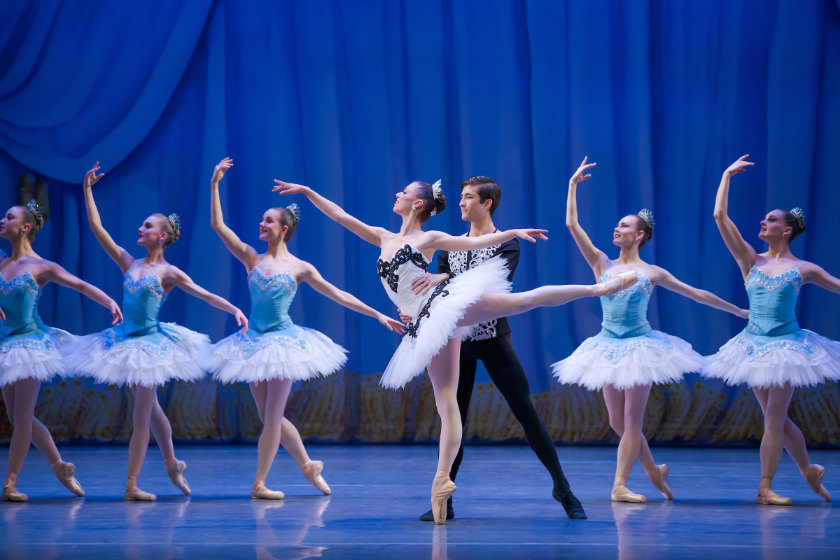 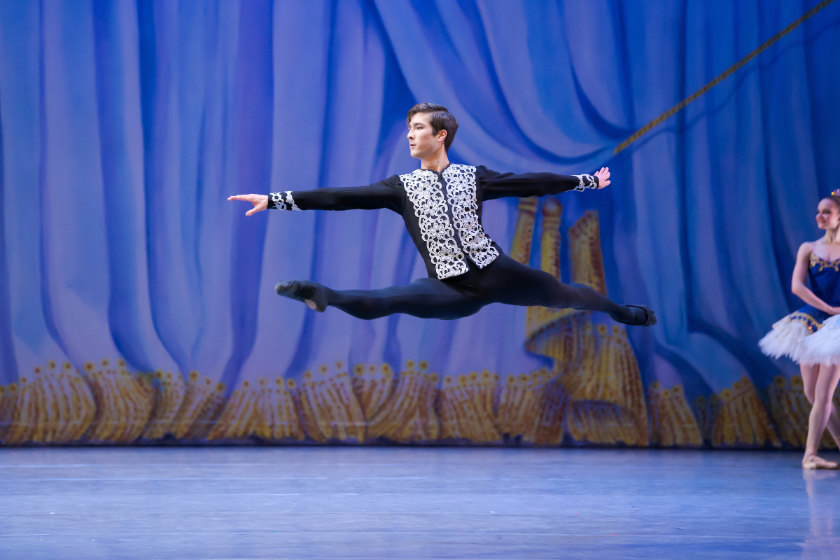 As enjoyable as Paquita was, we weren’t prepared for the dramatic impact and choreographic quality of The Firebird. This is the fourth version of the Stravinsky ballet performed by the company, reimagined completely for the 2020s, and with a message that is directly relevant to audiences today.
Prior has set his version of The Firebird in a dystopian wasteland, led by the tyrannical Burnt Mask (Paul Mathews, in an excellent turn as the antagonist). The Scavengers from the settlement head out in search of food and water, and it’s on the search that Arrow (Harrison James), left behind by the pack, encounters the Firebird (Ana Gallardo Lobaina).
It’s a direct contrast to Paquita, with extensive use of animation and graphics by POW Studios’ Marie Silberstein and Tim Hamilton, while Tracy Grant Lord’s costumes and set design place audiences right into the desert of the wasteland. The Firebird’s flames are cleverly projected on her, bringing her powers to life; they have a natural, organic effect. The image of a burning orb is a motif here, signalling both fire and rebirth; NASA imagery of the sun served as an early inspiration. Buswell, here, too works his lighting magic to great effect, taking the colours from the animations and letting both performers and animations do their work. Every aspect came together perfectly with Igor Stravinsky’s score.
The Firebird is great storytelling at its heart, an intense drama that held us spellbound, that the precise techniques and movements of the dancers served to enhance. Lobaina’s Firebird was largely en pointe as the mythical creature whose feathers could draw water; and with James’s Arrow there are romantic pas de deux moments that, with classical movements at the core, highlighted innovative approaches in Prior’s choreography.
When the Firebird is brought by the Burnt Mask and his scavengers back to the settlement, there are suggestions of violence danced out on stage. Neve (Sara Garbowski), Arrow’s partner, and Elizaveta (Kirby Selchow), the Burnt Mask’s second in command, play their roles convincingly, especially the final confrontation between the Firebird and the principal antagonists. Here, Lobaina has a chance to shine as the Firebird regains her strength, portrayed by the addition of four ballerinos who add volume to her wings.
Buswell very cleverly turns off the lights at The Firebird’s final moment, leaving things on a powerful high, and we were left breath-taken with the intensity of the one hour’s drama that had just unfolded.
Prior wants to remind us that we are fortunate to live in the conditions on Earth that we currently do, and The Firebird is a warning of a world where things have gone drastically wrong for all life on the planet. We have a symbiosis with all earthly life, in which climate action and conservation must be at the fore of what we do. In the uncertain vacuum of a post-pandemic era, The Firebird suggests what could happen if no action is taken.
No wonder there were members of the audience standing at the end, and numerous curtain calls for the dancers and the team. There is no exaggeration when we say, ‘If you can only see one ballet this year, make it The Firebird’—if we gave star ratings, this was a deserved 10 out of 10.—Jack Yan, Publisher