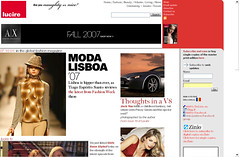 In the 1990s, the geo-targeting of advertisements on websites was not very common. If a campaign went out—such as when Condé Nast’s style.com advertised here to get its word out to fashionistas—it went out globally. We were paid, of course, for delivering campaigns to everyone.
Somewhere this century, advertising decided to take a backward step, since much of the ad world functions regionally or nationally. For the web, campaigns would be regionally or nationally targeted. If American Company X were advertising, then it sure didn’t want its ad to be seen by German Consumer Y. The technology of tracking where a visitor came from became more widely available around this time, and ad networks obliged.
This traditional advertising method has its appeal. If I ran X, then why would I want my brand exposed to Y, who would not buy my goods?
Here’s my problem with it. X has a chance to generate immense goodwill. X may expand into Germany at some point, and a whole bunch of consumers will know the name, just as they would if they were to buy an American magazine or watch a news item from the States.
When you watch TV and see X, even in the United States, do you go and buy its goods straight away? No, the brand is built ever so slightly with that exposure. In fact, I would argue that advertising online is more effective than on telly, but then no one measures TV ads by clickthroughs or any standard nearly as strict as those adopted for the web.
It is this global attitude that saw American brands get exposure in foreign markets in the ?rst place. Last time around it took ?ghting Fascism and hundreds of thousands of American lives to bring Coca-Cola’s name into the minds of people in Europe and Asia. This time we have a medium that allows exposure without waging war.
So it was a relief, and a throwback to the 1990s, to see that Armani Exchange is advertising here at the Lucire site in a global campaign, which even we folks here in New Zealand can see. Then, it is a global brand, so the exposures here make sense because we can buy the stuff. But I wish that there was less geo-targeting: this is a globalized planet, after all.
With one exception: the US Dancing with the Stars ads can stay there.