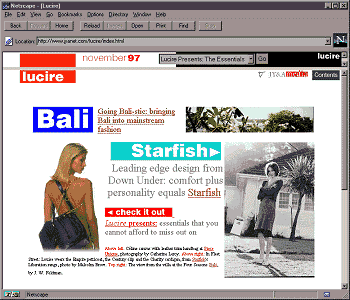 Above The ﬁrst issue of Lucire in 1997. Below right Lucire’s ﬁrst iPad cover.

n hour ago, we turned 13. Normally this wouldn’t have merited much of a mention, since 13’s not the sort of number people tend to celebrate. But I happened to be up, after a long day catching up on emails post-election, while head designer Tanya Sooksombatisatian sorted through our New York Fashion Week images.
Earlier this evening, fashion editor Sopheak Seng and I attended a fashion show for La’ Shika Bridal, held at the Museum Hotel in Wellington, and had good chats to the bridal designers and jewellery designer Victoria Taylor, sister of Rebecca.
I sat at a similar desk in 1997 when we started Lucire and uploaded the new home page, replacing a placeholder, at precisely midnight NZDT on October 21. (I even timed it.) That translated to October 20 at 6 a.m. in New York. At the time, the US market was the primary one online, so I tended to notice what the time was over on their east coast.
It was a 386 running Netscape 1-point-something that displayed Lucire’s ﬁrst edition here. The monitor had a resolution of 1,024 by 768 pixels. We developed it on Windows 3·1, but tested it on various Power Macs. I coded the home page by hand and did the ﬁrst graphics, including the initial caps (one of which begins this story).
We’ve gone through a lot—a print edition from 2004, a short-lived venture in Romania in 2005–6, and we now face 2011 with print in four countries and an iPad app that will go live any day. A cellphone edition has been around for a little while, though it never took off. I was in it for the long haul, but I really didn’t think speciﬁcs. We had a general direction, and we seized the opportunities as they came.
There have been many times when I have publicly thanked the people who got us here, and many of those who I named in December 2008, when I celebrated 21 years in business, were responsible for getting Lucire to where it is. Since then, Andrew Matusik, Victoria Jones, Sopheak Seng, Rola Saab, Jon Moe, Seka Ojdrović-Phillips, Samantha Hannah, Joseph Ungoco, Leyla Messian, Ashleigh Berry and Sylvia Giles must be added to the list. The many Massey University graduates who have tirelessly helped—Roanna Bell, Uma Lele and Brigitte Unger come to mind—as well as Gemma Conn from Waikato Institute of Technology.
I won’t say the journey has been easy: in fact, it’s been very tough. But I’m very glad that Lucire has been a medium through which many people have been brought together to do something we all love. We have been a change agent in the past, and that’s something I’m conscious we need to continue, through being on the forefront of new media. And we’ve introduced our fair share of labels, many of which have become big names. We’ve provided many people with coverage when others ignored them—discovering then that all they needed was that leg up to get to the next stage. 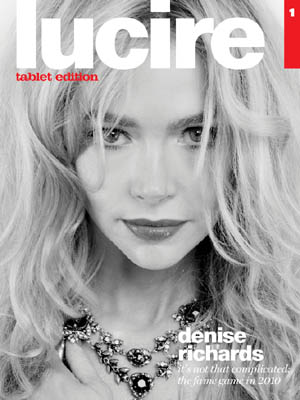 I still remember the fact that we were one of the ﬁrst to interview Zac Posen and Kathryn Wilson as she graduated from university, and covered Rebecca Taylor at Gen Art. Lucire published the ﬁrst series of sustainable style editorials in an international fashion magazine with Summer Rayne Oakes in the earlier part of the century.
To all our readers, thank you for being with us on this journey. I am mindful that we are merely stewards of the Lucire brand, and that it belongs to us not in law, but in spirit. We’re going to keep engaging and we plan to be with you for many more anniversaries to come.—Jack Yan