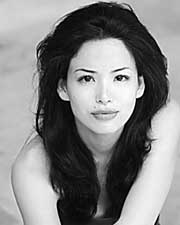 I’m thinking ahead to 2008, as many folks in my shoes would. And I have had some thought about future celebs and who I wouldn’t mind securing for our pages.
When Lucire editor Laura Ming-Wong chose Bruna Tenorio as one of our faces for 2008 in issue no. 24, I noticed that models and actresses with east Asian blood seem to be more mainstream as the decade comes to a close. Moon Bloodgood in Journeyman (NBC, Monday, 10 p.m.) has quickened more than a few male pulses, as has Kristin Kreuk, of Chinese–Dutch descent. Maggie Quigley (Maggie Q to the rest of you) has a presence, from her appearances in Mission: Impossible III and Live Free or Die Hard.
If there is indeed a trend, then I foresee Stephanie Chaves-Jacobsen (pictured) as being part of this. Ms Chaves-Jacobsen, Hong Kong-born, formerly New South Wales-resident and now ?rmly based in Hollywood, may be best known to sci-? fans from her appearances in the new Battlestar Galactica; Aussie soap lovers might remember her as Charlotte Adams in Home and Away. Heritage-wise, she can claim Portuguese on her mother’s side and Chinese, Norwegian and English on her father’s. There seems to be a very international look which Chaves-Jacobsen pulls off, that I alluded to in my summary of the Lucire ’08 models.
Her next appearance: the American remake of Life on Mars, playing Sam Tyler’s 2008 love interest before he has an accident and travels back to 1972 (for some reason, the American version takes place a year earlier). Is he mad, in a coma, or back in time?
I have faith in the remake, particularly as they have cast a couple of Irish fellas as Sam Tyler and Gene Hunt, and Colm Meaney (Hunt) reports that the script is excellent. I trust Mr Meaney’s trans-Atlantic judgement. I actually think the script will be pretty solid and this won’t turn out to be as bad as many earlier Brit transplants.
However, my only doubt surrounds whether Americans have as much love for 1970s’ cop shows as Brits do. There’s an awful lot of affection for The Sweeney and The Professionals, but is there as much for all those Quinn Martin productions and Kojak?
Till then, I am sticking with the excellent Journeyman, surely one of the few shows worth watching in the United States.

2 thoughts on “Stephanie Chaves-Jacobsen: the next actress of note?”