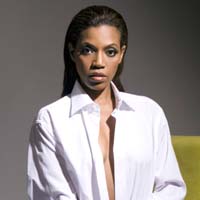 Two pieces on the main Lucire site over the last seven days: Stanley Moss’s review of Shanti Home, west of New Delhi, which he says is more homely and real than some of the big chain hotels; and, new today, an interview with Femi Emiola, the actress who starred in the If Looks Could Kill campaign for the Toyota Camry that appeared on this site a few months ago. As the story on Femi mentions, we had no idea that she was a friend of a contributor when we ?rst blogged about the campaign. It’s a small world out there.