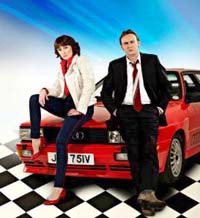 We’ve been patiently waiting for news of Ashes to Ashes’ second series for quite some time. This time last year, we had already talked about the series, the ’80s and the decade’s inﬂuence on fashion.
Last week was the ﬁrst time we had heard much about the next Ashes to Ashes, aside from a tabloid article in the Mirror saying how Philip Glenister, playing DCI Gene Hunt, would quit at the end of the second series. When I asked the Manchester Evening News’s Ian Wylie, a man better schooled in matters relating to the Gene Hunt world than most journalists, the response was (and I am not quoting him here) that it was cobblers.
Or, more accurately, that it was a non-story that did not correspond to his conversations with Mr Glenister. Wylie repeats it in a blog post for the News here.
I can sympathize. We’ve waited so long for any news that the best the British media could come up with for a while was an article that contradicted itself anyway. Finally, there was an event last week where stars Glenister, Keeley Hawes, Dean Andrews and Monserrat Lombard launched the new series, and on Thursday, the embargo was lifted for the ofﬁcial news from the BBC.
We knew some of the details anyway: the retro, time-travelling cop show is now set in 1982, not 1981, in the era of the Falklands War. The show is ‘darker’, with an ongoing theme about police corruption and mistrust.
And some ideas that might seem a little familiar to followers of the American remake of Life on Mars appear: Alex Drake (Hawes) runs into someone who also seems to be trapped in 1982, and she, like Sam Tyler before her in the original Life on Mars (2006–7), hears voices from the future.
But for readers of this publication, the important thing is that Piers Wenger, Head of Drama for BBC Wales, promises ‘outrageous fashions’ for the New Year.
While gloomier economic news usually brings with it retro styles, we wonder if that will be the case this time round.
The 1980s have been an ongoing theme in fashion since the beginning of the century, so much so that the decade has ﬁnally become as passé as it was in 1990.
In other words, while the ﬁrst series of Ashes to Ashes didn’t really surprise fashion-watchers, the second just might—because they’ll be less connected to what designers have been churning out on the catwalks. We’ve seen a few shoulder pads but it’s going to be a couple of seasons of big skirts, in our view—not quite what we’d associate with the ’80s. Leg warmers—once not too out of place as they came back mid-decade—have been banished as we close the 2000s. But we bet they’ll feature in Ashes to Ashes.
The Mirror reports that Hawes claims, ‘In one episode I get to wear a shirt with a giant pussy bow covered in anchors, tight jeans with red stripes down the side and anchor earrings.’
It just doesn’t sound like where we are today. But the mystery will, according to Wylie, have us glued, and there’s plenty of mistrust in the authorities in our present day which will see us ﬁnding some afﬁnity with Alex Drake and her crew.