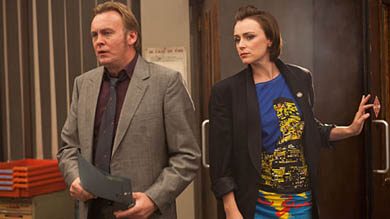 Power suits, check. Shoulder pads, check. Big earrings that could scrape those shoulder pads, check. Chunky necklaces, check. Blacks and whites and primary colours, check. The wardrobe department on BBC’s Ashes to Ashes seems to have done its homework as far as DI Alex Drake’s (Keeley Hawes) clothing is concerned, but we are trying to reach back in to our memories for something resembling her series three hairstyle.
Premièring April 2 at 9 p.m. on BBC One, the ﬁnal season of the time-travel-meets-cop-show drama sees the action moved on one more year to 1983, the year of GMTV, Flashdance and Return of the Jedi.
Hawes had complimentary things to say about her wardrobe in the ﬁnal series, based on the BBC press material.
‘I really liked the outﬁt Gene gave to Alex in hospital which consisted of a T-shirt with the New York skyline on it and skinny jeans,’ she said.
‘I have taken a couple of pairs of boots with me, and I’ve got Alex’s white leather jacket which I think I’ll auction off for charity.
‘I’ve also got the most fantastic pair of red Dorothy-style sequinned shoes with a 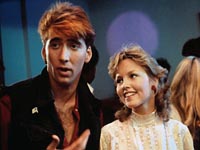 bow on the front of them. They remind me of the moment when Dorothy clicks her ruby shoes to go home.’
There is no mention of Alex Drake’s new hairstyle, a straight bob. It’s one of the things about her look that seems to jar with our recollections, at a time when the Valley Girl look (right), or even her series-two hairstyle, was more in vogue. We remember softer curls and perms.
One of the short-haired women who people aped in 1983 was Annie Lennox, but would her style have been that inﬂuential on a detective inspector in 1983?
Also from north of the border is Sheena Easton, who is remembered for wearing her hair short. (Bond fans will remember the opening sequence of 1981’s For Your Eyes Only, in which she appeared.) She is the one celebrity whose locks could have been an inspiration for the 1983 edition of DI Alex Drake. But Easton herself was heading toward a big-hair look by ’83: she sported her shorter styles on her album covers in 1981 and 1982.
We know: it’s a TV show, and if we nit-picked about everything on it, we’d be here all day.
Ever since Ashes’ predecessor, Life on Mars, aired, everyone from linguists to car nuts have poked holes at what was and was not available in the year the programmes were set.
It is only natural for the crew to want a different feel for each series, for creative reasons—especially in its ﬁnal year where the tone is purposely darker. The creators of the show, Matthew Graham and Ashley Pharoah, say that Life on Mars will ‘bleed into’ Ashes to Ashes as it heads toward its dénouement.
Regardless of hairstyles, we look forward to the ﬁnal eight episodes in the long saga of DCI Gene Hunt (Philip Glenister), and whether DI Alex Drake makes it home to 2008.
Readers’ recollections of 1983 fashion and hair are very welcome in the comments.

Also in Lucire’s news section
The ﬁnal of Ashes to Ashes: a cultural phen...
Ashes to Ashes won’t suddenly kick off ’...
1982 will be different as Ashes to Ashes’ nex...
Ashes to Ashes is back
US Life on Mars might point out where we are, not ...
Cheryl Cole steps out in 1950s style for ‘Un...
Categories
beauty / celebrity / fashion / hair / history / London / Lucire / media / tendances / trend