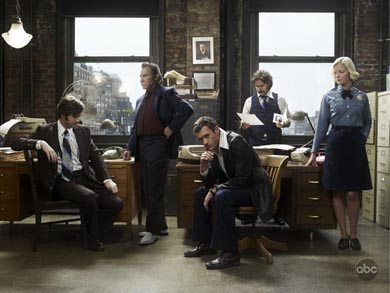 Above: The cast of the US remake of Life on Mars in their 1973 gear. From left, Jonathan Murphy as Det Chris Skelton, Harvey Keitel as Lt Gene Hunt, Jason O’Mara as Det Sam Tyler, Michael Imperioli as Det Ray Carling, and Gretchen Mol as Ofﬁcer Annie Norris. (Promotional photograph courtesy ABC.)

The American remake of Life on Mars airs on Thursday, the only new dramatic series ABC has this fall in the US.
I’ve been charting this remake for a long time on my personal blog, but the fashion side of it has me interested, too.
Some of ABC’s teasers have centred on the fashion. Two promotional videos have looked at Sam’s apartment set and the props. The ‘Starter Kit’, a teaser that was released last week, goes through the principal characters and mentions some of the colourful fashion.
Jason O’Mara, the American Sam Tyler, has refused to go 1970s with his hairstyle, while co-stars Harvey Keitel, Michael Imperioli and Jonathan Murphy (playing the American versions of Gene Hunt, Ray Carling and Chris Skelton) have donned more 1970s’ styles.
It’s only Sam’s wardrobe that has changed, and his standard garb in the first episode, after arriving in 1973, mirrors that of John Simm in the BBC original.
But does it matter that O’Mara didn’t go ’70s with his hair? Because it doesn’t look out of place.
Head out into the trendy parts of a lot of western cities, and you see hair that could have come forward in time from 1973.
Among women, we noticed a lot of hats at fashion weeks around the world—not just for the autumn–winter 2008–9 season now, but among the spring–summer 2009 stuff, too.
And Rhoda Morgenstern-style skullcaps appear a lot of places off the catwalk and in everyday wear.
Unfortunately (or fortunately, depending on your viewpoint), in the new Life on Mars, Gretchen Mol dons a policewoman’s uniform most of the time. Unlike Liz White in the original role of Annie, hers appears to be right for 1973. (The British uniform appeared more mid- to late-1970s.)
Life on Mars won’t spark a ’70s revival in hairstyles or fashion, because much of it is already in vogue, and has been for a while.
What it might spark is social commentary, one thing that the BBC series was good at doing. New producers Josh Appelbaum and André Nemec have been careful at preserving this element in the American remake. (Their predecessor, David E. Kelley, who made an unaired pilot, lost much of this, and was heavily criticized after his version leaked on to the internet in mid-2008.) In fact, it seems the new crew has taken not only the network’s demand that the remake be closer to the British original, but some of the fans’ comments as well.
While the 2006 original pointed out the differences in Manchester over the last 33 years, the American version might unwittingly point out the similarities.
There is an economic crisis, people are more paranoid, and the post-9-11 era has parallels with the post-Vietnam one.
The grittiness of 1970s’ cop movies aren’t out of place with the modern climate. After the underwhelming Kelley pilot I suggested that another Gene H., Mr Hackman, surely could provide inspiration for Life on Mars, after The French Connection. (I also suggested Dirty Harry.) Next year, Denzel Washington and John Travolta team up for another remake, the original coming from this era: The Taking of Pelham One Two Three.
While Son of Sam isn’t probing the streets of New York looking for victims in 2008, the downbeat feel of 1973 might connect with the modern American audience more than the original did with British audiences.
Never mind those critics saying that a lot of the audience wasn’t alive in 1973: the social messages and mood may come across as very contemporary.
And just like in Britain, Americans might just see Gene Hunt as a more appropriate, no-nonsense type of cop than what the law would permit today.

4 thoughts on “US Life on Mars might point out where we are, not where we were”