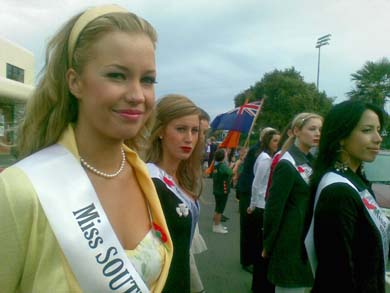 Katie Taylor at the ANZAC Day Parade in Levin, the morning before she was crowned Miss New Zealand.

Aucklander Katie Taylor, 22, sponsored by Southern First National of Manurewa, won Miss Universe New Zealand 2009 at the Levin Events’ Centre on Saturday.
Miss Taylor is a construction project manager and a qualiﬁed pilot.
She begins work today back in Auckland, replacing her ball gown and tiara with a reﬂective jacket and hard hat, in the lead-up to Miss Universe 2009 on August 23 at Paradise Island, the Bahamas.
This was her second attempt at the national title, having placed in the top ﬁve in 2007.
She says, ‘I have never won anything before, but I gave it everything I had.
‘I’m looking forward to working on getting ready for the ﬁnals in the Bahamas, and to doing my country proud.’
Crowd favourite, 18-year-old Priyani Puketapu, Miss Horowhenua, was judged ﬁrst runner-up. Anthea Stembridge, 19, sponsored by Ultimate Transport Solutions, was second runner-up.
Miss Universe New Zealand pageant director Val Lott says she is ‘delighted’ by the judges’ choices for the top three places.
The judges were impressed by Miss Taylor’s natural conversation in her interview, which was held privately at the Horowhenua District Council Buildings on April 24.
She also wowed the panel of ﬁve judges with her performance on the night, in particular in the eveningwear segment.
Pageant judge Jack Yan, publisher of Lucire and the chairman of the international jury for Miss Sweden, says the 2009 pageant was the toughest he had seen in his three years with Miss Universe New Zealand.
‘The winners were separated by the slimmest of margins. When we walked back into the hall, we had no idea how the top ﬁve would be ordered,’ he says.
Miss Manawatu, Samantha Elvy—another crowd favourite—and Miss Taupo, Cathrine Mitchell, rounded off the top five.
The judging panel was led by Di Goldsworthy of the Newmarket Business Association, and included Horowhenua District Mayor Brendan Duffy, make-up artist and agency placement manager for Talent Scouts Ltd. Evana Patterson, and former Miss Horowhenua and businesswoman Suzanne Cottle.
Ms Lott says that she was thrilled at the welcome the pageant received in Levin, rather than its traditional home in Auckland, complimenting mayor Brendan Duffy and the Council for their welcome.
The Abba Touring Group, led by Aaron Keown, performed live at the Events’ Centre.
An informal after-party for Miss Taylor and the other contestants was held at the Retro Bar in Paraparaumu.