Images of the new Jaguar XJ are surfacing—below is the ﬁrst ofﬁcial, non-embargoed photograph of the highly anticipated new model, exclusively revealed here at Lucire. The launch is in London tonight at 8.30 p.m. BST, hosted by Jay Leno and Jaguar boss Mike O’Driscoll. 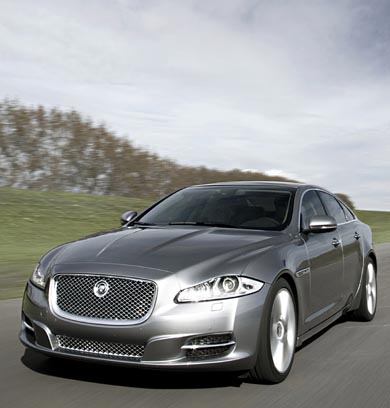 Jaguar has been issuing teasers of the new XJ for months. The car, styled under acclaimed Jaguar design boss Ian Callum, is a huge departure from the previous model, which continued a look started by the original XJ6 launched in 1968.
With an aluminium frame and panels, the new XJ is similar to the outgoing car under the skin, but has a far more modern and dramatic look.
Callum had been keen to return Jaguar to a more forward-looking design theme after years of both stagnation and retro design.
From the front, there is a passing resemblance to the Jaguar XF, but a six-light glasshouse and a rising waistline give a greater impression of length for the range’s ﬂagship.
It is at the rear where the new Jaguar XJ has surprised observers, with thin taillights that have a hint of Bentley Continental to them. However, they continue to a point on to the horizontal surface on either side of the bootlid.