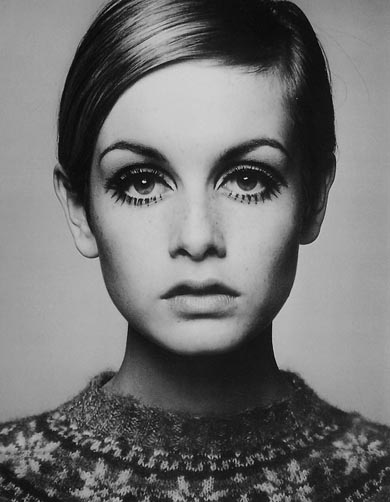 Above: The iconic image of Twiggy, aged 16 and weighing 90 lb, photographed by Barry Lategan in 1966.

It has been known that a book celebrating Twiggy’s 60th birthday, Twiggy: a Life in Photographs, will be published by the National Portrait Gallery this year, but only today has news emerged about the dates for an exhibition commemorating the event.
The London Evening Standard reports that the exhibition will run from September 19 (Twiggy’s birthday) to March 24.
Cecilia Joicey of the National Portrait Gallery says, ‘Twiggy has worked with leading portrait photographers from Cecil Beaton and Bert Stern in the 1960s to Steven Meisel in the 1990s and Annie Leibovitz in the 21st century, and combining these iconic images with her insights will provide a rare glimpse into the life of the world’s ﬁrst supermodel.’
The iconic photograph of Twiggy and her bob cut by Barry Lategan will be on display, as will more recent portraits by Bryan Adams and Sølve Sundsbø.
Twiggy was born Lesley Hornby in London in 1949 and is married to the actor Leigh Lawson.