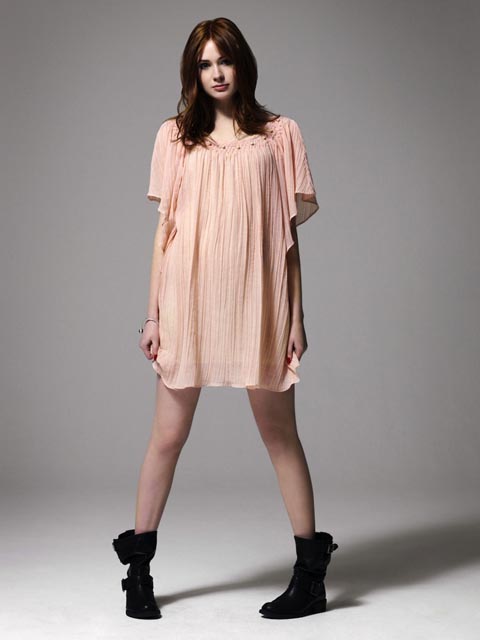 Karen Gillan, who came to fame with her Amy Pond role in Doctor Who, will play Jean Shrimpton—‘the Shrimp’, one of Britain’s most iconic models of the ’60s—in a BBC ﬁlm to be shown on BBC Four.
We’ll Take Manhattan focuses on the four-year love affair between Shrimpton and photographer David Bailey.
The ﬁlm focuses on a Vogue photo shoot in New York in 1962 and how the couple met.
Shrimpton featured heavily in British Vogue in the 1960s as well as the other magazines of the day. She and Twiggy are probably the most recognizable British models of the decade.
Had the term been coined, the Shrimp would have been a supermodel by today’s standards.
Bailey left his wife to be with Shrimpton.
In a BBC statement, Gillan says, ‘Jean Shrimpton is an icon of the ’sixties and I am so excited to be playing somebody who had such a lasting impact on the fashion world. I can’t wait to take on the challenge of bringing Jean and Bailey’s fascinating love story to life. ’Sixties here I come.’
Executive producer Claire Parker of production company Kudos (Hustle, Life on Mars) says, ‘In Jean, Bailey found someone that he and his camera fell in love with. We’ll Take Manhattan captures the essence of their dynamic affair and how they unwittingly changed the face of a decade.’
Richard Klein, Controller BBC Four, says, ‘The story of David Bailey and Jean Shrimpton is classic territory for BBC Four—a moment in time, a fusion of talents, that had a huge impact on cultural life. It is a drama that is all about being alive and taking a chance, being young and kicking down the statues, and yet it is also a beautiful love story. And if you want to know why our world looks like it does, then this is the drama that tells you.’
Filming for the bio-pic, written and directed by John McKay (Life on Mars, Robin Hood) begins in May. It is Gillan’s ﬁrst starring role.