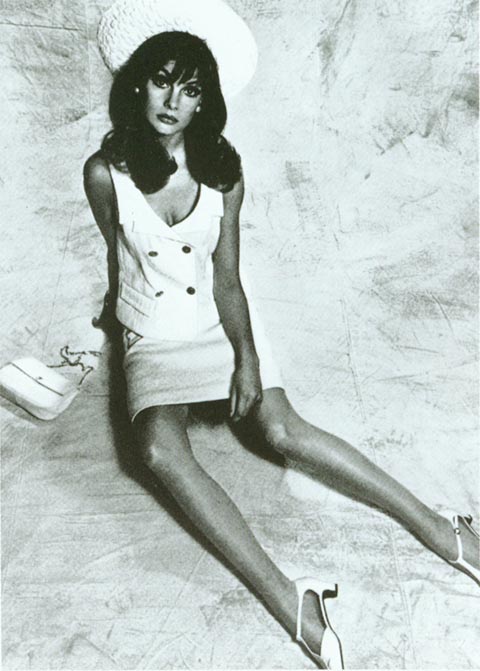 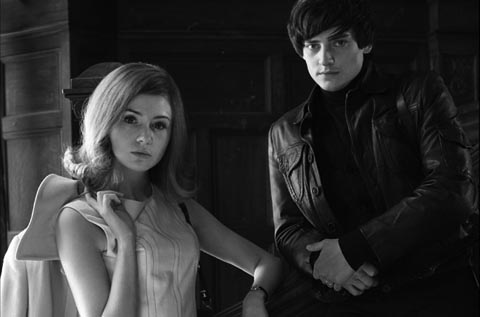 Compare the pair. Top Jean Shrimpton, as she appeared in Vogue shot by Bailey in 1965. Above Karen Gillan and Aneurin Barnard as Jean Shrimpton and David Bailey in a publicity shot for We’ll Take Manhattan, which aired last week on BBC4.

The visitor stats have been very clear: one of the most searched-terms at Lucire has been David Bailey and Jean Shrimpton over the last few days.
Presumably, it’s due to BBC4’s We’ll Take Manhattan, a TV ﬁlm about a ground-breaking New York shoot by David Bailey and his model and lover, Jean Shrimpton. The shoot deﬁned, according to the programme, the 1960s.
As previewed in Lucire, the BBC4 ﬁlm starred Karen Gillan (Doctor Who) and Aneurin Barnard as the couple. While it took a little while to get going—it begins with the pair boarding a jet to head to New York, then goes into ﬂashback—with the charged arguments between Bailey and Vogue fashion editor Lady Clare Rendlesham occupying a great deal of the action once the story gets back on track. The centre of the argument: that it’s the 1960s, that Bailey wants to catch more liveliness, and that the stuffy portraits shown in British Vogue—which had, of course, covered the Coronation the decade before with HM the Queen and aristocratic ladies-in-waiting—were a thing of the past.
Of course it’s idealized, but it’s not too far from the truth when the ﬁlm claims that Bailey and the Shrimp deﬁned the decade.
The forces had been coming in for a while, but perhaps not with the youthquake that the Bailey represented after national service was abolished in 1962 and there was plenty of youthful energy around Britain. Technological changes in the 1950s and the telephoto lens already meant fashion photographers were experimenting with more lively shots, and Vogue photographers such as Irving Penn, Norman Parkinson and Antony Armstrong-Jones (later Lord Snowdon) were capturing moments that the magazine’s readers would not have seen the decade before. While staged, they appeared to be casual moments, with the model seemingly living her life in the editorials.
What Bailey did was take this into raw sexiness, tapping correctly into the Zeitgeist. Starting at British Vogue in July 1960, Bailey had in fact met Shrimpton while she was being shot for a cornﬂakes advertisement by Brian Duffy. And unlike the ﬁlm, Bailey was actually very grateful for the gig and knew what British Vogue was: ‘When Vogue offered to pay me to photograph beautiful women all day I thought I was on a dream-boat.’
Gillan captures the innocent country girl that Shrimpton was at that point, which makes the transformation into ’60s sex icon all the more poignant. Never mind posh locations with Bailey: the Shrimp was on the ﬂoor, legs akimbo, complete with teddy bear or another prop. Skirts got shorter, progressively so till 1966, and Jean Shrimpton and her long legs modelled plenty in the decade. It might not be inaccurate to say that Shrimpton was the 1960s supermodel, along with Twiggy—certainly they were two of the most recognized women in Britain.
Vogue had gone from being a magazine read by the well-to-do lady to one that reached the masses—and for the ﬁrst time, its pages even became pin-ups.
Bailey has remained in the public eye with his ongoing work, though Shrimpton has opted for a quieter life, running a country hotel. Both had reportedly approved of the script, which showed them in a positive light—though given Shrimpton’s silence over the years, we’re guessing it must have had some verisimilitude for her to give it the nod.
There were some glaring mistakes—a 2005 Chevrolet taxi zooms by in a 1962 scene in New York—and Mad Men it was not, neither in feel nor in execution. Where Kudos was once known for lavish productions—Life on Mars springs to mind—some corners felt cut, probably thanks to the recession and the difﬁculty of securing locations that still looked “’sixties enough” in New York. It lacked the pace of another winter BBC ﬁlm around this time last year: Eric and Ernie, covering the pre-fame period of Eric Morecambe and Ernie Wise.
But, on the other hand, period Vogue covers were faithfully re-created, the wardrobe department did extremely well securing period costumes, and Frances Barber stole the show with her portrayal of Vogue editor-in-chief Diana Vreeland in the New York scenes. And it summed up the period well: while a telemovie will take liberties with history, there was no denying that Bailey and Shrimpton were inﬂuential and very deserving subjects.—Jack Yan, Publisher